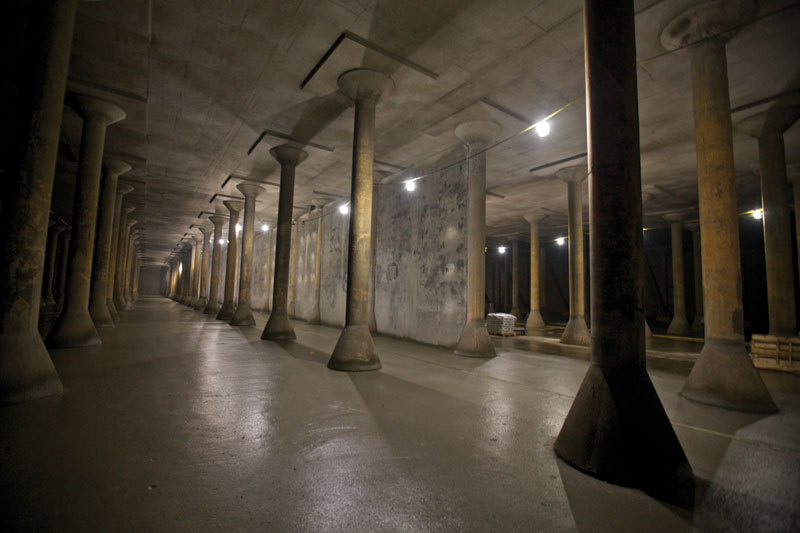 Across the country, municipalities are grappling with major water infrastructure challenges: aging infrastructure, legacy combined sewer systems, upgrading treatment plants to meet environmental requirements and deal with emerging contaminants, and improving stormwater management in the face of climate change. Here’s an overview of what water service managers in five Canadian cities see as priorities for the coming years.

Over the next four years, Vancouver’s main focus will be upgrading its sewers from a combined to separated system, said Brian Crowe, director of water, sewers, and district energy for the City of Vancouver. As in many older cities built on large bodies of water, about half of Vancouver’s sewers carry both sanitary water and stormwater, which can result in sanitary water getting into the environment during heavy rains. Under the province’s Integrated Liquid Waste and Resource Management Plan, combined overflows must be eliminated by 2050.

To date, the city has been putting in a second set of pipes as it carries out its regular maintenance and upgrades, at a pace of about 11 kilometres per year. To meet the 2050 deadline, however, it will need to increase the pace to 15 kilometres (or about one per cent) annually. “At $30 million per year, reconstruction of the sewer system is the city’s largest ongoing capital program,” Crowe said.

Provincial requirements also call for Metro Vancouver to upgrade its wastewater facilities from primary to secondary treatment. The new $700-million Lions Gate Secondary Wastewater Treatment Plant, to serve the municipalities of North and West Vancouver, is slated to be operational by 2020. Yet the Iona Wastewater Treatment Plant, which serves the City of Vancouver, will also need to be upgraded—a $1-billion project. Crowe explained that, while the regulatory deadline is not until 2030, the city is pushing to have it done sooner for environmental reasons.

One challenge specific to Vancouver: increasing the drinking water system’s seismic resistance. As part of its ongoing infrastructure renewal program, the city is deciding what portions should be “hardened.” In fact, they’re testing a new product imported from Japan: ductile iron pipe with special joints designed to withstand earthquakes. A trial installation is being conducted over 800 metres.

Calgary
For Calgary, one of the biggest challenges is keeping up with population growth. In 2014, about 39,000 people joined the city, and another 250,000 to 300,000 are expected over the next 10 years. “We need to make the infrastructure investments to be able to service those new Calgarians,” said Francois Bouchart, the manager of infrastructure planning for Calgary’s water services. “About 50 per cent of our total capital program goes toward supporting the city’s growth.”

To this end, one major project is the expansion of the Bonnybrook Wastewater Treatment Plant, the city’s largest investment project to date. In the initial design stages, the $700-million plant would begin operating by 2019 or 2020.

Maintaining and renewing the city’s aging infrastructure is another priority, while also determining the most cost-effective way to do so. For example, Calgary has been relining many of its sanitary mains with a material that re-establishes the pipe’s structural integrity, a method that avoids having to dig up and replace the entire pipe. Many of the city’s storm ponds are also reaching the end of their useful lives, filling up with sediment. A program is being launched to assess their condition, so as to develop a strategy for cleaning out the ponds and ensuring they meet the city’s needs and its regulatory and environmental goals with respect to water quality protection.

Finally, while enhancing drainage and stormwater management in older communities has been underway since the 1990s, in November 2014, city council asked water services to accelerate the program. “We’re finding that, if you look at all the environmental, social, and economic benefits compared to the cost of the upgrades, for every dollar spent, we get about five dollars back in benefits,” Bouchart explained.

Toronto Water’s biggest challenge over the past decade has been getting through its State of Good-Repair backlog. That is, carrying out long-overdue maintenance and repair work on the city’s $28.2 billion in capital assets: drinking water, wastewater, and stormwater infrastructure. It has raised rates each year for the past nine to cover these costs.

“Our objective was to keep operating costs as stable as possible by finding efficiencies, and to use rate increases to fund an aggressive capital program,” explained Lou Di Gironimo, the general manager for Toronto Water. Over the next 10 years, more than half of the capital investments will continue to go toward maintaining infrastructure.

However, now that the backlog is finally decreasing, Toronto Water is also investing more in service enhancement and improvements, such as its basement flooding program, and addressing the problem of combined sewer overflows.

In addition, over the next 10 years, $3.8 billion has been allocated to wastewater treatment and collection systems, including a $1.7-billion investment in the Ashbridges Bay Wastewater Treatment Plant (the largest of four plants servicing Toronto) for new pumping stations, a UV-disinfection system, and other upgrades.

On the drinking water side, a $210-million expansion to the F.J. Horgan Water Treatment Plant was completed in 2012, increasing capacity and adding ozone to the treatment process for primary disinfection. The city will continue to invest $2.9 billion in its drinking water network over the next 10 years.

Finally, while stormwater currently accounts for about only 14 per cent of capital investments, that portion is expected to grow to 30 per cent, with $2.6 billion allocated over the next 10 years. This includes a project to build a large collection tunnel to address the problem of combined sewer overflows in the Don River.

For Montreal, one of the biggest challenges is renewing its aging infrastructure—especially the drinking water distribution network. Chantal Morissette, director of water services, said the city plans to invest $1.1 billion in water services over the next three years, compared to $1.5 billion over the past nine years.

“We have about 9,000 kilometres of transmission, distribution, and collection mains and pipes—the equivalent of Montreal to Vancouver and back,” she said. The city aims to step up rehabilitation to 100 kilometres per year at a cost of $400 million over the next three years. Like Toronto, whenever possible the city uses “trenchless rehabilitation” methods to save on costs, time, and disruptions.

One problem that may be specific to Montreal is securing the water supply to certain sectors, by creating more back-ups in the system. Morissette explained that currently, some sectors are served by a single transmission main: if a breakage were to occur, the water supply to that sector would be cut off. To remedy the situation, the city is renovating a decommissioned drinking water reservoir (a three-year, $160-million project) and building several new watermains.

Plans are also continuing to build the world’s largest wastewater treatment plant using ozone disinfection. “We’re now in the analysis process for purchasing the ozonation systems,” Morissette said. First announced in 2008 at an estimated cost of $200 million, the plant is now expected to be in operation by 2017 or 2018.

Halifax
In 2015, Halifax Water’s biggest infrastructure challenge will be to make inroads in wet weather management in one of the oldest

wastewater systems in Canada. Carl Yates, the general manager of Halifax Water, said the city will take “a holistic approach to the reduction of inflow and infiltration in the wastewater systems with a focus on separated systems.”

Yates also added that Halifax—like so many other Canadian municipalities—is working to achieve compliance for its wastewater plants, in line with the new federal Wastewater System Effluent Regulations (WSER).

“Our poster project for WSER compliance is the upgrade and expansion of the Aerotech Wastewater Treatment Facility, which serves the Halifax International Airport,” he said. “This project, estimated to cost $21 million, has received preliminary approval through the federal Building Canada Fund program.”

The federal, provincial, and municipal governments will equally share the cost of the Aerotech Wastewater Treatment Facility upgrade and expansion. The expansion, which will double the capacity of the plant to 2,600 metres a day, is expected to be completed by the end of 2016, with construction slated to start this year. WC