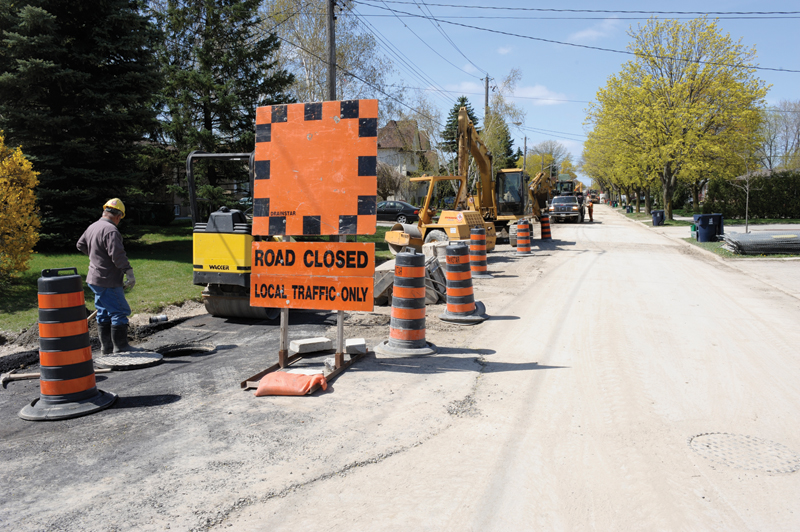 It wasn’t a happy day back in 1987 when the International Joint Commission (IJC) listed Toronto’s waterfront as one of 43 Areas of Concern in the Great Lakes Basin. “Toronto the Good” was coming of age. Anxious to strut about the global stage, the city would welcome world leaders to the 1988 meeting of the G7 western economic powerhouses and set its sights on other international events. So, when the IJC sounded the alarm over raw sewage flowing into Lake Ontario, the recognition flew in the face of any world-class ambitions.

Roughly four per cent of Toronto’s sewer pipes are over 100 years old. In the 1840s, following a severe cholera outbreak, the municipality began installing combined sewers to direct stormwater and raw sewage away from populated areas to the larger rivers and the lake. This antiquated design remains in older neighbourhoods and, despite modern end-of-pipe treatment facilities, contaminated stormwater and raw sewage continue to escape whenever rainwater overwhelms the combined system, leading to periodic red-flag warnings along the city’s beaches.

“We have 2,600 storm sewer outfalls across the city and about 80 combined sewer overflows, 33 of which flow directly into Lake Ontario, and each is a source of pollution,” says Michael D’Andrea, the City’s director of water infrastructure management. Factor in exposed and washed out pipes, flooded basements, sewage back-ups, streambank erosion and aging, inadequate infrastructure, and it’s clear that action is urgently needed.

It might seem logical to separate storm sewers from their sanitary brethren. But D’Andrea points out that, for all its apparent purity, stormwater becomes toxic when it falls on cities and mixes with dog and bird feces and oil and exhaust residues from vehicles.

Montreal, New York, and many other big cities also have combined sewers, but Toronto is looking to leap ahead with the Wet Weather Flow Master Plan, a 25-year, $1-billion basket of measures ranging from rooftop downspout disconnections and streambank repairs to big-ticket sewer fixes, storage tunnels, and stormwater ponds. Approved in 2003, the watershed-based master plan treats the ecosystem as a whole, spreading work into manageable slices budgeted at roughly $40 million per year.

Already, the City has built four large stormwater management ponds near the mouth of the Humber River. These natural-looking systems trap polluted stormwater, with particles heavier than water settling to the bottom. These particles and other pollutants are absorbed by aquatic vegetation, and the sun’s ultraviolet rays destroy surface bacteria.

Closer to downtown, where building density is high and space limited, the Western Beaches Storage Tunnel intercepts stormwater and combined sewer overflows, as do underground tanks along the eastern beaches. Crews have restored sections of Highland Creek east of the Scarborough Bluffs using a bioengineered approach, with crib walls and timber logs stabilizing the bank and stimulating new growth. Where the flow is high and the erosion particularly aggressive, large limestone slabs now channel the water. Construction also began early last year on a stormwater management pond at Earl Bales Park in the city’s north end to treat runoff and help improve water quality in the West Don River.

However, these measures are only the start. An environmental assessment is underway for the Don River and Central Waterfront Project that, alone, will deal with some 50 combined sewer overflow discharges. D’Andrea says preliminary plans call for underground storage tunnels and tanks and a treatment facility. “What remains to be decided is what the final geometry will look like. We have some options we’re hoping to finalize and take to the public this spring.”

Over the full 25-year scope of the master plan, planners anticipate some 180 stormwater ponds and 90 underground and subsurface storage tanks and tunnels, along with assorted softer measures. Sameer Dhalla, water resources manager with the Toronto and Region Conservation Authority (TRCA), says the master plan stands to make a significant impact. Through monitoring stations at a dozen beaches and other sites across Toronto, the TRCA has recorded E. coli counts up to 10 times over the levels deemed safe by the provincial environment ministry. Dhalla says the Don River has proven particularly troublesome, but the Don and Central Waterfront component stands to go a long way towards meeting provincial water quality objectives and delisting Toronto as an Area of Concern. “Whereas the other projects (within the master plan) will add up over 25 years, this one project has the biggest bang. Once it’s implemented, it’s going to offer the most improvement in one single area.”

Of course, what lies upstream ends up downstream, and the TRCA has worked alongside the City to ensure a watershed approach, liaising with Markham, Richmond Hill, Vaughan, and other municipalities to develop consistent stormwater criteria for new development and protective measures where development already exists. For instance, the TRCA helped the Town of Richmond Hill plan and implement the recently-completed Pioneer Park Stormwater Management Rehabilitation Project.

Because Toronto’s planned measures are paced over time, project managers expect to make adjustments along the way, not only to keep up with new technology, but to address any new needs that arise. D’Andrea says the city has witnessed an increased frequency of extreme weather over the years, and the sewer system was not designed to handle stormwater volumes from extreme events such as the one that occurred on August 19, 2005. That storm damaged natural areas, sunk a portion of Finch Avenue West, and flooded close to 4,200 basements. D’Andrea says the City is working to bring the storm sewer system to a higher standard in areas that have experienced chronic basement flooding.

“We’re just in the throes of doing an update to the new council,” D’Andrea says, explaining that water and sewer projects are paid for mainly through water revenues, and overall infrastructure demands have sometimes meant dipping into financial reserves. “Our hope is that, as we go forward on the major infrastructure pieces, the federal and provincial governments will help support the construction of these major projects, as they have in other jurisdictions like Hamilton, which built large underground storage systems.”

It’s been nearly 25 years since the IJC deemed Toronto Harbour an Area of Concern. The region has grown considerably since then, both in population and—with preparations underway to host the 2015 PanAm Games—as a performer on the world stage. Elaine MacDonald, a senior scientist with Ecojustice in Toronto, says the master plan should significantly help ameliorate the pollution, and she hopes politicians ensure the work continues.

“We thought that we were out of the woods with the Great Lakes, and that things were getting better, but in recent years we’ve seen them decline again,” MacDonald says. “We’ve seen more algae blooms and problems with weed growth, and we’ve seen degraded water quality. Lake Ontario is our major source of drinking water and is important for recreation and wildlife. So if we want to save the Great Lakes, and see them improve, we need to deal with these issues. It’s not really an option in our eyes. It’s about the City managing its business.”  WC

Saul Chernos, a freelance journalist, lives in Toronto and specializes in environmental issues.