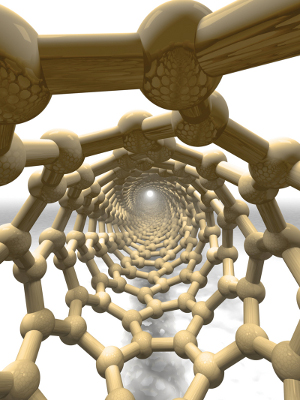 In water and wastewater treatment, carbon nanotube technology (CNT) has many advantages, such as reusability and therefore increased efficiency compared to traditional membranes that require frequent replacement. Nanotubes require low energy for operation, due to their hydrophobic nature and chemical selectivity, which can be functionalized to target contaminants such as arsenic, fluoride, heavy metals and toxic organic compounds.

But despite showing promise in commercial and industrial applications, CNT has steadily been the subject of toxicology studies that suggest the benefits may come at a cost.

“Carbon is not the issue,” says Gianluigi A. Botton, Canada Research Chair in electron microscopy of nanoscale materials at McMaster University. “Charcoal is already used in water filters and air purification systems and carbon by itself is not necessarily toxic. The issue is the size and length of the carbon nanotube.”

A size and length that is similar in shape to asbestos, he says, the infamous fibrous particle that becomes trapped in the human body due to its physical properties.

Risks to humans, animals and ecosystems

To date, most toxicological studies of carbon nanotubes have examined their effect in the lungs of rodents, but the results have been inconclusive.

This year, the first long-term (90-day) inhalation study of CNT in rodents was conducted and, while there was some variation in its conclusions with preceding studies, significant damage was still observed in the respiratory tract, reaffirming the hazard of CNT exposure to the lung even in low concentrations (Ma-Hock et al., 2009).

Though research is being refined to more accurately simulate industry conditions, it’s still unclear which specific properties of carbon nanotubes make it harmful to the respiratory tract, and whether or not such damages are progressive or transient.

In another study conducted this year, the physical properties of CNTs are under the microscope and nowhere near lungs and rodents.

Nelson O’Driscoll, Canada Research Chair in biogeochemistry at Acadia University, along with colleagues Tammy Messier; Michael D. Robertson, Canada Research Chair in materials science; and John Murimboh, associate professor in the department of chemistry, examined the suspension of multi-walled carbon nanotubes in freshwater and the effect of CNT size in determining its suspension in water.

Significant for its study of CNTs in aqueous environments, O’Driscoll’s research is doubly important because it also addresses how exposure occurs in the environment.

Investigating the effect of CNT size on its suspension in freshwater, O’Driscoll’s research expands on studies conducted at the Georgia Institute of Technology, which concludes that the suspension of CNTs correlates with the presence of natural organic matter (NOM) (Hyung et al., 2007) and that the adsorption of CNT onto NOM is proportional to aromatic content (Hyung and Kim, 2008).

See also  Why water is the new carbon

The suspension of CNTs may appear to have little to do with its toxicity, but it is essential to researchers’ understanding of how CNTs persist in the environment and in predicting how exposure to CNTs can occur in the ecosystem.

In the context of O’Driscoll’s research, suspension is the state of being in the water column, the area between the surface and the sediment where fish are likely to come in contact with the suspended CNTs.

However, damage doesn’t occur only within the water column. Even if CNTs settle into the sediment, it could be harmful for organisms living there. As well, the actual effects of contaminated water supplies by nanomaterials and the potential risks of consequent genetic mutation and of eugenics have yet to be diligently pursued.

Furthermore, depending on the characteristics of the lake and its ecosystem, it is possible for the sediment to be remixed into the water column again, re-suspending the carbon nanotubes and extending the reach of its influence.

“With any exposure scenario, toxicity is related to concentration and is dependent on the ecosystem,” says O’Driscoll, “which means risk assessments will really be needed conducted on a case by case basis.”

At present, Environment Canada maintains it is not aware of the import or manufacture of carbon nanotubes for the purpose of wastewater treatment in Canada.

Correspondingly, an assessment of this substance has not yet been undertaken and the New Substances program was therefore unable to comment on any environmental risks they may pose.

However, the program maintains that, if the import or manufacture of carbon nanotubes for wastewater treatment occurs, it could be flagged under the New Substances Notification Regulations (Chemicals and Polymers) prior to import or manufacture. At that point, Environment Canada and Health Canada would conduct a risk assessment in order to produce the required information such as toxicological data and environmental releases.

This would only occur, however, if the substance was above trigger quantities. That worries some. Items on the Domestic Substances List (DSL) are exempt from investigation unless they are manufactured or imported above trigger quantities or exhibit novel molecular structures. Critics argue that nanotechnology is potent even in small quantities and that nanomaterials of identical molecular structure to their bulk components will necessarily exhibit identical properties.

“Canada is not in a bad position compared with other countries,” says Freddy Kleitz, Canada Research Chair in functional nanomaterials at Laval University. Kleitz believes toxicology studies have increased exponentially, and though he says it’s high time for these toxicological studies, he feels Canada is not late.

Maureen Carter-Whitney, environmental lawyer and research director of the Canadian Institute for Environmental Law and Policy (CIELAP) agrees that other countries are more or less in the same situation, though she remains concerned current regulations may not be wholly suited to monitoring nanotechnology.

“Canada can always catch up,” says Carter-Whitney. However, she also recommends Canada approach nanotechnology under the precautionary principle until adequate regulations are in place. While she gets a sense that Canada has a roadmap towards authoring an effective regulatory nanotechnology framework, she feels so far, little progress has been made.

“It’s going to save the world, but it can kill everybody,” says Michael Lounsbury, characterizing the current climate in the discussions surrounding nanotechnology and the study of its potential risks on the environment and human health.

The principal investigator of NE3LS (Nano Ethical, Environmental, Economic, Legal and Social Issues) at the National Institute of Nanotechnology, Lounsbury examines global knowledge structures and has, as part of his larger research scope, studied the institutional history of carbon nanotubes.

“My belief about toxicology is that it’s become a marginalized enterprise within the science community,” says Lounsbury. “Serious regulation would be politically difficult without clear and compelling evidence.”

Lounsbury does observe that the number of studies per year is growing rapidly, and that there is more attention being paid to the toxicity of nanotechnology.

“The important thing to note is this is very recent. While there were toxicological studies going back a decade or more, there are very few of them. The main attention is happening now.”

If risk assessments can be undertaken in a timely manner and responsibly to optimize innovation, the success of nanotechnology research such as those occurring at the University of Waterloo under Michael Tam and Zhongwei Chen could have incredible benefits. Both are developing nanotechnology approaches to water filtration and purification.

Chen has just begun a project focused on the fabricating and testing of zeolite-polymer membrane in water filtration. He hopes the combination will enhance the advantages of either method while eliminating shortcomings. If he is successful, the new membrane would be an excellent filter for both organic and inorganic impurities, and operate on little energy, cost effectively.

This zeolite-polymer is made by dispersing nanoparticles of zeolite into a polyamide precursor, then cast onto microporous polysulfone. The resulting membrane will consist of three layers, where the top layer, usually about 20 nanometers, is the most crucial as it houses the zeolite particles.

If all goes well, Chen feels results will be reached by the end of 2010.

“Once it begins, it’s very fast,” he says. “We already have a lot of experience with the materials. We only need to go through the procedures of fabricating the membrane and of testing its performance.”

While Chen is focused on creating a high-performing water filtration membrane by combining existing techniques, Tam is developing something entirely new.

Concerned with the accumulation of legacy contaminants that are flushed into the environment and escaping current water treatment procedures, Tam is researching the use of nanoparticles magnetized through impreganation with salt and iron that will be able to remove pharmaceutical and hormonal contaminants from water supplies.

As it stands, pharmaceutical contaminants are passing through water treatment facilities treated, but still intact and left to either re-enter the environment where it interferes with the reproduction of fish or continuing on to taps in one’s home.

“We need to address the problem of these contaminants that have been accumulating,” says Dr. Tam, noting that though these impurities are found in trace amounts today, these small amounts will accumulate to form larger problems if they are not removed.

Under Tam’s novel separation process, the magnetized nanoparticles (also called Functional Magnetic NanoParticles, or FMNPs), will be able to target the unwanted compounds and eliminate them by attaching themselves to the contaminants, made possible through the high surface area and polarization or charge of the FMNPs. To remove the contaminants, operators will simply have to filter the treated water through a magnetic separator that attracts the FMNPs and consequently, the attached impurities.

Being able to measure and assess the degree of pharmaceutical contamination will allow accurate diagnosis of the impact of human activity. As Tam puts it, “If you can’t measure it, you can’t deal with the problem.”

Not unlike what Tam characterizes as the difficulty in treating water, the challenge in regulating nanotechnology, lies not just in measuring the risks.

Though toxicological studies are increasing, Lounsbury feels scientific development lags behind commercial development. Lounsbury also says Canada lacks the informational infrastructure to harness emerging toxicological studies in a cumulative way that will help people think about policies and regulations with foresight to deal with health and safety implications going forward.

“Nanotechnology could improve life if we know how to manipulate it properly throughout its full life cycle from production to distribution, use and disposal,” says Kleitz, “but that is the great task.”