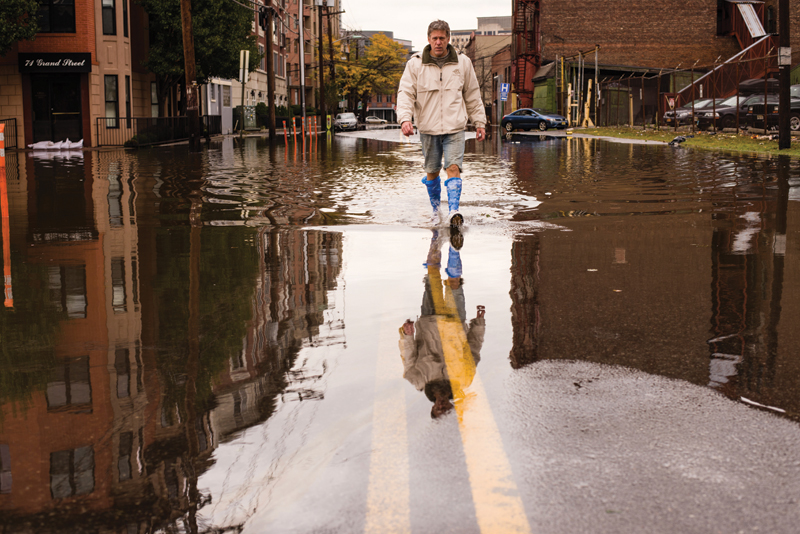 As businesses struggled to recover from one of the greatest economic crises since the 1930s, natural disaster struck. According to Neil Gilbertson, managing director at Marsh Canada, 2011 was one of the worst loss years for insurers in history, costing insurers over $100 billion. In Thailand, for instance, losses due to flood alone late that year amounted to over $20 billion.

The World Economic Forum’s 2012 Global Risk Survey indicates that business managers can expect such losses to continue, and even increase. The report names the absence of climate change adaptation plans as the second greatest environmental risk, surpassed only by rising greenhouse gas (GHG) emissions.

Global governance failure, a risk identified in 2012, will only exacerbate failure to adapt to climate change. Adapting to climate change requires not only an understanding of the associated risks themselves, such as persistent extreme weather, but the interdependence of risks. For example, the associated economic risk of volatility in agricultural and energy prices.

The increasing cost of insured losses is due to both persistent adverse weather, and the expanding development of physical assets, especially in the more vulnerable, coastal regions. Bloomberg, which lists the 20 cities most vulnerable to climate extremes, ranks these cities by assets at risk. Miami, Guangzhou, and New York/Newark top the 2012 list, which also includes Mumbai (7), Tokyo (9), Hong Kong (10), Bangkok (11), and Ho Chi Minh City (17).

Notably, Bloomberg’s list does not include a single Canadian city. Although this can rightfully be considered an advantage of doing business in Canada, it does not mean we are immune to adverse weather altogether.

The persistent impacts of changing weather patterns are, however, more of an issue for Canadian businesses than catastrophes. The same IBC report noted that Ontario and Quebec experienced a record rainfall on March 5, 2011, which resulted in a 300 per cent increase in claims for seemingly minor incidents that required contractor repairs. More seriously, lack of investments in infrastructure improvements that exists in most cities renders sewer and other water management systems vulnerable to increased precipitation, affecting water quality as well as physical assets.

Flood losses are becoming a growing concern, according to Gilbertson. Some insurance companies are introducing a percentage deductible (percentage of the value of the asset insured) rather than a flat dollar amount. Flood losses are already more expensive than other coverage for Canadian businesses: a typical flood deductible on a commercial property is $50,000 compared to the “all other perils” deductible of $5,000 – $10,000.  Similar to automobile insurance considerations, a company that is either located on a flood plain, or has experienced higher than expected flood claims may be subject to higher deductibles and/or premiums.

The risk of flooding is also garnering significant attention at the municipal level, especially in Canada where overland flooding is not insurable for residences. Lack of insurance requires the public sector to step in with funding relief in the event of flooding disasters. Cities are trying to reduce this risk exposure through risk assessments and corresponding action plans, such as upgraded sewer infrastructure, which are funded in part through increasing water rates. These rates have been going up in the City of Toronto by approximately nine per cent every year. According to David McLeod from the City of Toronto’s Environment Office, rates are expected to continue to rise. Rising costs of water will have a financial impact on companies that are accustomed to viewing it as a cheap resource.

A higher price for energy should also increase the cost of water, and theoretically could redefine the allocation of such costs. According to McLeod, the greatest cost of the City’s electricity bill is pumping water. It requires significantly more energy to pump uphill to Greater Toronto Area (GTA) suburbs in the northern parts of the city than to areas right along the lake, yet all GTA users pay one rate.

Dr. Bryan Karney from the University of Toronto’s Faculty of Applied Science and Engineering suggests that a water rate for different regions that more appropriately aligns with the cost of supplying water to that region would incentivize companies to internalize the cost of water in its business decisions, including the location of its plants and offices.

Businesses operating in cities along the Great Lakes are blessed compared to other regions in Canada and the United States that are more susceptible to drought. The lakes are a major source of water and serve to moderate temperature. Water levels must be maintained, however, to retain this advantage. Increased evaporation due to rising temperatures, expanding need from resident communities as well as those beyond the Great Lakes regions, and increased migration to Great Lakes cities, all threaten this tremendous source of water. Reducing 2012’s number one WEF Global Risk Survey environmental risk will help address all three threats and stabilize our economy’s financial performance.  WC

“Over last decade or so, losses associated with urban flooding have been increasing for the insurance industry,” says Dan Sandink, manager of resilient communities and research for the Institute for Catastrophic Loss Reduction (ICLR). Sandink says, “There are a number of factors associated with insured losses, including health impacts resulting from raw sewage entering homes. We’re interested in reducing urban flood risk.”

Sandink is the author of Urban Flooding in Canada, a recent ICLR report which looks at lot-side risk reduction through voluntary retrofit programs, code interpretation, and bylaws.

Many Canadian insurers, faced with increasing property claims resulting from sewer backup, have begun to recommend or require the installation of backwater valves and other lot-side flood protection measures as conditions for sewer backup insurance coverage. Backwater valves protect against flooding caused by return flow of sewage waters.

Current code, however, is unclear about requirements surrounding the installation of backwater valves. Sandink says that interpretation of the National Plumbing Code (Section 2.4.6.4, specifically) is not uniform across provinces and municipalities. “The code leaves it up to municipalities to identify which homes might be subject to backflow issues,” he says.

An ICLR survey of municipal respondents revealed differing interpretation of the code’s meaning, prompting Sandink to conclude that the National Plumbing Code and provincial building and/or plumbing codes need to further clarify sentences related to those installation requirements.