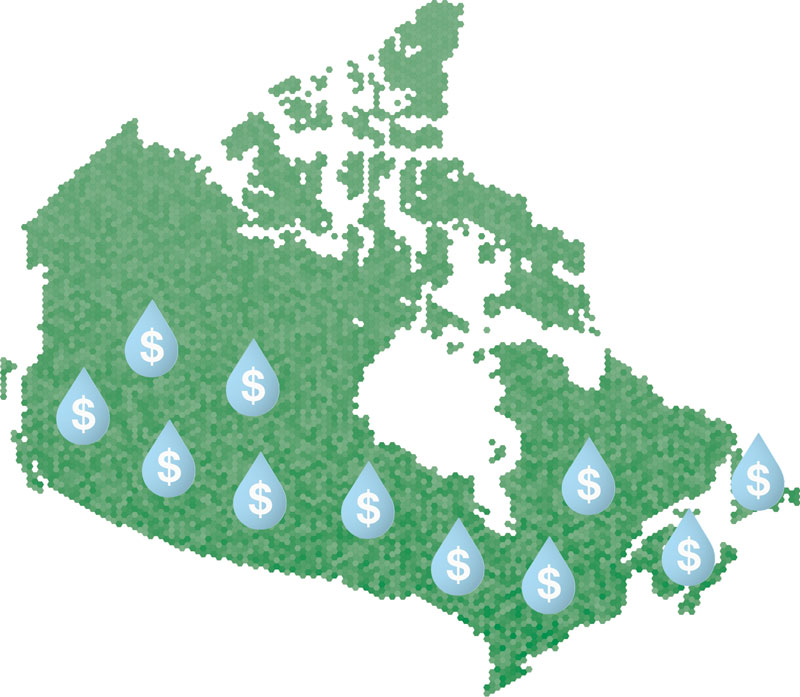 Federation of Canadian Municipalities (FCM) then-president Claude Dauphin wrote of “serious concern about the gaps in the design of the New Building Canada Fund.” Calgary mayor Naheed Nenshi voiced worries about the lack of funding for cultural and recreational facilities. Liberal leader Justin Trudeau complained that the Conservatives “have slashed the available funding by nearly 90 per cent in its first year.”

Despite the criticism, however, Ottawa has thus far committed more than $35 million toward 27 drinking water and wastewater infrastructure projects nationwide, and more federal contributions are expected in the coming months.

Starting out west, here are some of the highlights:

In November 2014, members of Bowen Island’s council agreed to pursue funding for the construction of a $7.5-million water treatment plant on the island municipality, which is part of the Greater Vancouver Regional District. The municipality is seeking a $2.5-million investment from both the federal and provincial governments.

The City of Prince Rupert, meanwhile, has identified its raw water supply project, a $15 million to $16 million undertaking, as its priority for any funding received from either the NBCF or Gas Tax General Strategic Priorities Fund. The project involves a total replacement of the city’s water supply system.

In the northwest Alberta City of Grand Prairie, mayor Bill Given announced in June 2014 that he will support a NBCF application from Aquatera Utilities, who provide water and wastewater treatment to the city. The application seeks funding for two projects: the development of the Wapiti River facility, including the construction of a new water intake and expansion of the raw water storage capacity; and the completion of the 116 Street trunk line sewer.

Perhaps no province has been more active in securing NBCF funding for water and wastewater projects than Manitoba. Numerous municipalities in several regions of the province have already had their applications accepted.

In the Rural Municipality of Rosser, lying directly to the northwest of Winnipeg, Phase 1 of the Cartier Regional Water Co-Operative Expansion Project will receive a maximum of $14.5 million from the federal government, including up to $12.1 million under the NCBF’s Provincial-Territorial Infrastructure Component – National and Regional Projects (PTIC-NRP).

This ambitious project will service CentrePort Canada, Manitoba’s large inland port, and several nearby municipalities. It includes the construction of a new water treatment plant in the Rural Municipality of Headingley, and is one of the most high-profile water projects to have been approved for NBCF funding thus far.

Several other Manitoba communities have also been promised funding through the NBCF’s Small Communities Fund (SCF). In Steinbach, Manitoba’s third-largest city, Phase 1 of the Underground Water and Wastewater Infrastructure Renewal project will receive equal funding from the federal, provincial, and municipal governments, while the Rural Municipality of Ritchot, south of Winnipeg, will receive financial help in upgrading its drinking water infrastructure.

While Saskatchewan hasn’t been as prolific in securing NBCF funding as Manitoba, the province is home to several municipalities actively pursuing federal assistance. Communities like the City of Estevan, the Village of Buena Vista, Lac des Iles, and the towns of Nipawin and Delisle have all decided to submit applications for funding. Projects include wastewater treatment plant upgrades, drinking water infrastructure improvements, sewage transmission projects, the construction of a water treatment plant in Nipawin, and storm sewer system installation.

In Eastern Canada, the upgrade and expansion of the Aerotech Wastewater Treatment Plant in the Halifax Regional Municipality will receive up to $7 million through the NBCF. The $21-million project will include an overhaul of the sewage treatment plant near Halifax’s Stanfield International Airport. The federal government’s contribution to the project represents a third of the total cost, with the remaining $14 million to be split between provincial and municipal governments. Upgrades will increase the capacity and treatment levels of wastewater effluent at the plant, which will help end a long freeze on development in the Aerotech Business Park.

In Sackville, New Brunswick, officials submitted two applications to the NBCF-SCF: one to upgrade the municipal sewage lagoon, and another to divert stormwater from Lorne Street. While the sewage lagoon project is still several years from being implemented, and neither project currently has a price tag attached, town engineer Dwayne Acton summed up the scope of the projects in telling the Sackville Tribune Post: “We’re talking in the millions of dollars.”

The City of Charlottetown has submitted a list of five important projects to the province, hoping to receive funding for each. Three of the five projects are related to the water and sewer system in Prince Edward Island’s capital city, including a new water source and storm and sanitary water separation projects.

With a growing number of NBCF water infrastructure projects popping up across the country, the federal government’s massive 10-year plan seems to be rolling to cautiously optimistic start. Despite criticisms from political opponents and scattered confusion over funding eligibility, it can’t be argued that funding applications are being submitted and accepted from coast to coast. However, just one year into a decade long plan, it’s far too early to either dismiss or validate the critics. Municipal, provincial, and federal officials will have their hands full as they attempt to distribute billions of dollars fairly and practically between communities in need across Canada.  WC