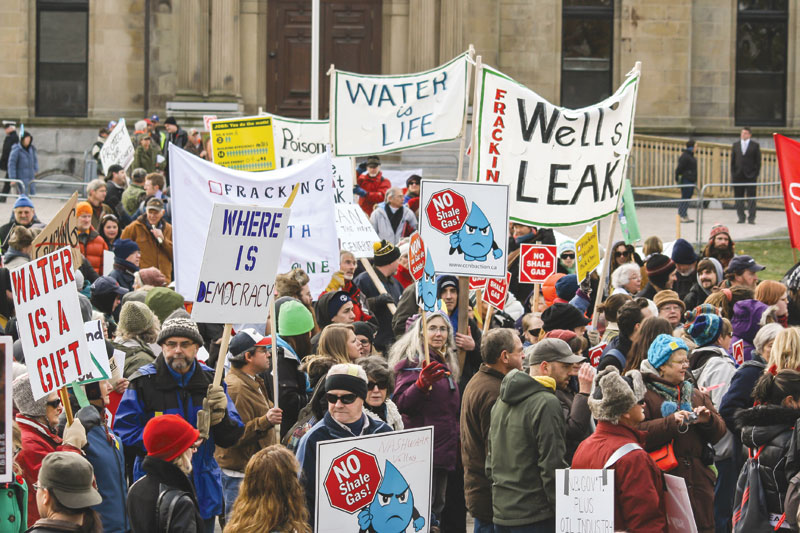 Four years ago, if you had asked Stephanie Merrill of the Conservation Council of New Brunswick (CCNB) and Jennifer West of the Ecology Action Centre (EAC) in Nova Scotia the odds of success in their respective efforts to enact fracking bans in their provinces, they would have likely replied, “Pretty low.” After all, they were going up against a powerful industry, lax government oversight, and a largely uninformed public.

Yet in fall 2014, the provinces of Nova Scotia and New Brunswick joined Quebec in halting the practice of hydraulic fracturing for shale gas.

How did this happen? To find out, we asked Merrill and West to share their respective stories.

New Brunswick: Water for the Win

Ultimately, water was the lynchpin that led to one of the largest citizen-engaged movements in the recent history of New Brunswick.

In 2010, the New Brunswick government granted Texas-based SWN Resources Canada the right to explore for shale gas on one million hectares of land in the province. The size of these exploration rights and the fact they literally crossed people’s backyards propelled interest in finding out the environmental and health impacts of fracking.

Safety concerns about personal drinking water—65 per cent of New Brunswickers get their drinking water from groundwater wells—are what triggered the initial interest in learning about fracking, Merrill explained.

At first, Merrill didn’t have much of an overall campaign strategy other than informing others about what she knew. Her research on the health and environmental concerns and risks was well received, and she found herself responding to an increasing number of requests to give presentations.

During her presentations, she felt it was important at the beginning not to steer people in a particular direction. “The key was to build trusting and credible relationships and provide information in a way that made people interested, and to leave them with enough questions to want to explore the issue on their own.”

The response was great, as community groups popped up throughout the province. By 2011, about 40 local anti-fracking groups had formed to focus on the issue.

By 2012, Merrill’s work had evolved from educating communities and groups to helping the new groups connect with each other and “build up social capital on the issue.” This contributed to community-based actions becoming more sophisticated, from door-to-door canvassing to anti-fracking groups jointly organizing rallies and strategic communications.

From network to alliance

In September 2011, the informal network of groups came together to form the New Brunswick Anti-Shale Gas Alliance.

“The idea was that being an entity with one voice would be more effective,” Merrill said. “For example, it helped in organizing press conferences and media packages and responding to media requests.” It was also practical, in that groups had developed a large fundraising effort for a legal action and being an incorporated group with a board of directors was a necessary step to make the legal action possible.

Having many of the groups housed under the umbrella of the alliance allowed Merrill and CCNB to evolve from network coordination to a more behind-the-scenes role of adviser—helping the alliance with media messaging, public communications and actions, and strategic planning.

A key to the success of the anti-fracking movement in New Brunswick, according to Merrill, has been its ability to unite Anglophone, Francophone, and First Nations populations in a way that hasn’t been seen in the province’s recent history. Typically, despite New Brunswick being on unceded territory of the Maliseet and Mi’kimaq Nations, there is often a lack of meaningful conversations with First Nations communities and people concerning resource development in the province. Merrill explained that “consultation” has been a controversial topic, and often, including in the shale gas fracking discussions, First Nations have felt left out and “only a mere check mark on the consultation boxes of review processes.”

Early in the morning of October 17, 2013, the RCMP decided to break up a 17-day-old blockade of seismic testing equipment along a stretch of highway near the town of Rexton. Things quickly got out of hand: pepper spray, Molotov cocktails, camouflaged police snipers, five burned RCMP vehicles, and 40 people arrested, including the chief and council of the Elsipogtog First Nation.

It turned the anti-shale gas fracking protests into a national story. But despite the clash finally “bursting through the provincial media bubble” and leading to Idle No More solidarity actions across the country, Merrill said she still wishes it hadn’t happened. “It was a very emotional day and a lot of people are still feeling very traumatized by the events.”

By 2014, while the anti-shale gas movement was increasingly winning the public debate, they didn’t seem to be making much political progress. Merrill said the discourse had gotten so polarized between anti-fracking activists and the Conservative government that the conversation “essentially got shut down.” As a result, the alliance turned its attention to making the issue part of the 2014 election campaign, advocating that New Brunswick voters say no to shale gas.

Politicians on all sides seemed quite willing to have shale gas be the centerpiece of the campaign. The Conservatives made fracking a core part of their election platform, advocating that New Brunswickers say yes to shale gas. This forced the Liberal party into a position to call for a moratorium. For the first time in a long time, an environmental issue was a core election issue in New Brunswick.

When the Liberals won a majority government and a Green Party MLA was elected for the first time, it was clear a halt to the practice of shale gas fracking was soon to follow. And it did, on December 18, when the new government announced a moratorium.

When West got the word on September 3, 2014 that the Nova Scotia government was set to announce its decision on shale gas fracking, she didn’t know what to expect. “We were equally prepared to celebrate or to storm the streets,” she said.

Bill 6, an amendment to the Petroleum Resources Act, which officially went into effect on November 20, 2014, turned out to be cause for celebration, as it prohibits the fracking of shale gas in the province. Four years of hard work, creativity, and alliance-building by West and her cohorts had finally paid off.

West, along with EAC energy coordinator Catherine Abreu, formed the Nova Scotia Fracking Resource and Action Coalition (NOFRAC) to educate the public and put pressure on politicians. NOFRAC’s first task was to get a handle on the fracking that was already happening in the province. So they put in freedom-of-information requests and pulled more than 20 binders of information from the Department of Energy and the Department of Environment on the geology, drilling records, water withdrawal applications, communications, proprietary chemicals, and much more.

•   With very little community consultation, five exploration wells were drilled and fracking was used in three of them.

•   The government had approved a wastewater disposal method that involved freezing a pond of formation water and fracking fluid in the winter and then letting the water drain into the woods and groundwater when the  pond thawed.

•   Wastewater had been taken to several places for disposal, including a municipal facility that did not know the contents of the waste.

•   Proprietary chemicals were being used that had serious health and environmental risks and impacts associated with them.

•   Despite two government directives to clean up the wastewater ponds, neither was adhered to by the company Triangle Petroleum.

The research, which took two years, revealed that fracking in the province was “largely unregulated and unenforceable,” West said.

In fall 2011, NOFRAC organized a conference to provide Nova Scotians with independent information on the science of fracking. By this time, the coalition had expanded to more than 50 members. NOFRAC organized online petitions, public rallies, letter-writing campaigns, and efforts to lobby MLAs at local constituency offices. West developed a steering committee in January 2012 to guide the organization through strategic planning, which led to the creation of various working groups.

As a result of this work to mobilize concerned citizens, the NDP government in 2011 launched a one-year internal review of fracking, later extended to 2013. Prior to the October 2013 election, the NDP announced a change to the structure of the review from a closed-door review to an independent review led by an external chairperson.

West said the government’s review, which was continued by the Liberals after they came to power, was “short, underfunded, and not collaborative between panel members.” Even though members of the anti-fracking movement submitted peer-reviewed resources to the review panel, these didn’t make it into early chapters of the report.

As part of the review, the panel organized a series of 11 public information sessions in the summer of 2014. West met with a group of Halifax-based organizers, including PowerShift Canada, LeadNow, and the Sierra Club to talk about how to mobilize the public to attend these public meetings. Dubbed the “League of Ladies,” the resulting organizing team used clever and humourous radio spots, ads, posters, banners, a toolkit, t-shirts, and social media blasts to publicize  the meetings.

“Many of our strategic discussions were around how to use the most consistent concern—water—in our communications strategies,” West said.

Water safety concerns drove high turnout as more than 1,500 Nova Scotians attended the public information sessions. West said that David Wheeler, chair of the government’s review panel, was shocked by how informed the public was about fracking and how passionate and entrenched their opposition had become. Residents who came to the sessions undecided about the issue were often swayed by the overwhelming support of their neighbours for a fracking ban.

West said that NOFRAC made sure to try to keep various First Nations in the loop. “First Nations groups are concerned about access to clean water for the next seven generations—something that cannot be assured in the context of fracking.”

West and her colleagues deployed a number of tactics to build a popular movement in the province.

Door-to-door canvassing by EAC staff and volunteers helped boost the organization’s membership from 1,500 to 4,000 over a three-year period. When David Suzuki came to Nova Scotia in 2013 for the release of the film “Climate Change in Atlantic Canada” and spoke about the perils of fracking during a panel discussion on environmental issues, it caused a doubling of NOFRAC members and a big boost to EAC’s membership.

West said NOFRAC had no way of knowing whether this public support was having any impact on the government’s decision-making process. Although the coalition had been in contact with Andrew Younger before he became provincial energy minister in 2013, they were unable to connect with him or anyone else in government.

West said the coalition took the high road—“every step the government took, we matched with science, professionalism, and politeness”—and this helped build credibility with the government and with the public. Ultimately, it contributed to the success of the campaign, as the final report issued by the review panel cautioned against fracking in Nova Scotia.  WC