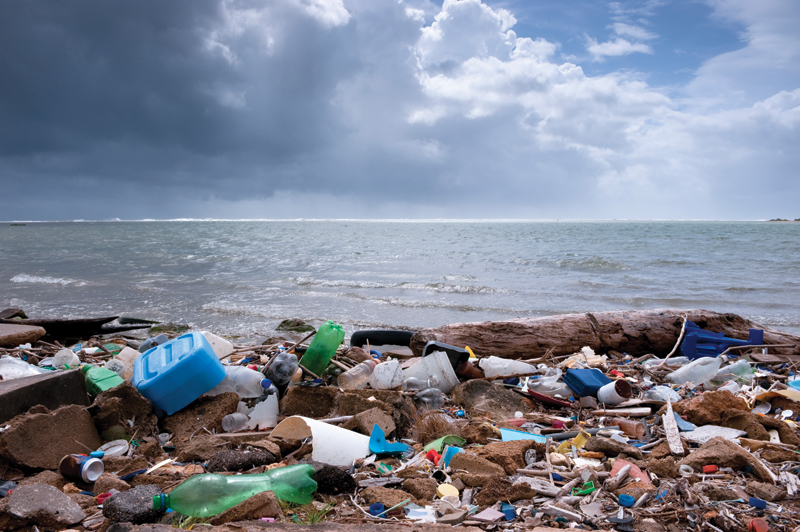 When Dr. Sherri Mason and her team cast a net into three Great Lakes last July, scouring for debris, they weren’t sure what to expect. Mason, an associate professor of chemistry with the State University of New York (SUNY), had followed the ongoing saga of the Great Pacific Garbage Patch and other giant swirls of litter cluttering the oceans and wondered about the situation closer to home. Might the world’s largest body of fresh water be a significant contributor to an alarming phenomenon that has seen highly durable plastics literally stuff the bellies of birds, fish, and other sea creatures? Anxious about the impact that people living within this enormous inland watershed might be having on aquatic life, Mason secured funding, arranged for a boat, and assembled the resources and expertise needed to draw answers from the lakes’ often-choppy waters.

The Great Pacific Garbage Patch is not alone in the world, and it is somewhat of a misnomer. There are two major garbage patches in the Pacific—one north, one south—and there are two more in the Atlantic, plus a fifth in the Indian Ocean. Each is located within a major gyre, subservient to its currents. Marcus Eriksen, executive director of the 5 Gyres Institute, has visited each of them, studying their effects on aquatic life. From microscopic bead-like molecules to entire cigarette lighters and water bottles, Eriksen has seen it all—and not always floating or captured in his nets. Three years ago, after finding dead birds with plastic extruding from their decomposing chests, he was moved to launch 5 Gyres to confront this emerging but increasingly striking environmental crisis.

Eriksen has always been a fighter. The New Orleans native joined the U.S. Marines and saw action in 1991 securing burning oil wells in Kuwait. Two decades later, conscious that plastics are derived from the very petrochemicals he once protected, he’s looking to combat consumer and industrial waste. “The shift was really just questioning what’s worth fighting for,” Eriksen explains.

Under Eriksen’s guidance, 5 Gyres members have sailed the world with fine-mesh nets and all the laboratory tools needed to identify microscopic particles. The one thing the group has lacked is permanent access to a vessel. So, when Mason arranged space aboard the U.S. Brig Niagara for three weeks to sample three Great Lakes and sought assistance from 5 Gyres, Eriksen was hooked.

Mason, a Texas native who works from SUNY’s Fredonia campus, has long been interested in the effects plastics have on the world’s oceans. Out on Lake Erie one day as part of a course she was teaching, she realized she had heard nothing about plastics affecting inland waterways. “I went into the literature review to see if anything had been published,” Mason says. “There’s a Canadian researcher who’s looked at debris on the beaches, but there’s no record of any open-water sampling.” Mason knew 5 Gyres had a trawl, with netting tighter than the weaving on a t-shirt, at 333 microns, and the match was made.

Accompanied by a handful of other professors and students exploring various ecological subjects, Mason and her SUNY and 5 Gyres colleagues visited Lake Superior, Lake Huron, and Lake Erie, dipping their net 21 times and picking up quantities of surface garbage that surprised them. Two Lake Erie samples yielded 450,000 and 600,000 pieces of plastic per square kilometre—quantities larger than reported from the oceanic patches. However, volumes varied. One sample contained just 600 pieces. Finds included styrofoam, packaging, and bottle cap fragments (with bags, bottles, tampon applicators, balloons with plastic strings, and cigarette filters—a polyacetate—commonly found along shorelines).

Most prevalent, however, were particles microscopic in size. The crew also found that volumes tended to increase as they sailed in the direction of the water flow. “That matched our hypothesis,” Mason explains. “Lake Superior is the beginning of the Great Lakes system, and while a huge number of people live along Superior, Lake Erie has the most people and the water flows in that direction.” Mason says this suggests a cumulative effect, with the lower lakes likely receiving debris from the upper lakes, leading to concern that what goes into Lake Superior and the other lakes eventually makes its way into the Atlantic Ocean.

How is this garbage getting into the lakes in the first place? “It’s from us,” Mason points out. “When you see a bag blowing in the breeze, eventually it’s going to make its way into the lake.” Of equal concern is what’s flushed down toilets and drains. Some of the smallest plastics the researchers found were pint-sized beads from personal care products such as exfoliants, many of which employ synthetic materials as abrasives. Mason worries these materials could potentially bypass conventional sewage treatment facilities, especially when combined sewers overflow and untreated sewage escapes during heavy rain events.

The plastic itself isn’t the only problem. Mason says PCBs, persistent organic pollutants, and other chemicals that end up in the water tend to adsorb onto materials such as plastic. So, even if plastic isn’t the actual killer, aquatic creatures could potentially be affected by poisons clinging to the plastic. Toxins could also work their way up the food chain, ultimately affecting humans. Mason even worries that the microscopic beads from personal care products and other sources might be bypassing local wastewater treatment systems in much the same way pharmaceuticals are escaping, and that they might even be returning through drinking water intakes.

Municipal officials overseeing water and wastewater systems agree that the issue of plastics in inland water bodies is only recently coming to light. London, Ontario draws water from both Lake Huron and Lake Erie. The city’s managing director for environmental and engineering services, John Braam, says his drinking water plant’s filters are designed to catch particles larger than two microns. This is well below the 333-micron threshold Mason and her crew captured during their expedition, and Braam is confident the city’s drinking water is free of particles larger than two microns.

See also  Below and Beyond

On the wastewater side, Braam says he doesn’t know of any municipality—his included—which actively measures wastewater treatment plant outflows for particle content. Still, he’s relatively confident his wastewater treatment systems are catching most plastics, along with other the other contents they’re designed to capture. “Through biologically activated mechanical wastewater treatment plants, most plastics ought to be picked up through the screening or settlement processes,” Braam explains, adding that London has membrane filters designed to .04 microns, which would be effective at removing larger micro-sized particles. As well, he points out that micro-plastic fibres from polyester and other synthetic clothing, which can come off in the wash, often adhere to other waste organics and are therefore likely to get trapped with those organics in the wastewater treatment process. The difficulty, Braam points out, is he can’t prove any kind of capture rate with certainty because plastic particulates aren’t measured in wastewater.

Mike Newbigging, a consulting engineer who specializes in wastewater, says that during the sewage treatment process, screens, skimmers, clarifiers, and biological systems tend to remove a lot of material. While tertiary plants with multimedia sand filters will capture smaller materials, and membrane filters can be effective down to a handful of microns, Newbigging concedes that microscopic items such as beads from personal care products and pieces of fibre from synthetic clothing could pass through. “A membrane facility is so fine it takes out bacteria,” Newbigging says. However, membranes are mostly used to filter drinking water, and are used on only a handful of wastewater systems. “Obviously that level of treatment comes at a cost, and it needs to be evaluated as to the need to bring it to that level. The majority of plants in Ontario are secondary biological plants, but they’re not going to have a barrier-like filter at the end.”

Paul Helm, a senior research scientist with the Ontario Ministry of Environment’s Great Lakes Monitoring Unit, says the issue of plastics has only recently landed on the government’s radar, thanks in part to news reports about Mason’s study and about tiny plastic fragments that washed up on the southern shore of Lake Huron near Kincardine a few years ago. “A study was done on the kind of plastic, and they couldn’t really figure out where it was coming from,” Helm says. “These are the only two studies to date in the Great Lakes, and the SUNY study hasn’t been published yet so it isn’t in the peer-reviewed science.”

While the Ministry isn’t doing any research at the moment about plastics in inland waterways, that could soon change. “News reports have highlighted the issue, and we’re starting to talk to researchers in the field,” Helm says. “We’re looking at the methods we have in-house that could start addressing whether we could measure the plastics and what partners we would work with if we needed to pursue this. Right now we’re working to put together some context to characterize the issue. If you’re finding plastics then the next step is you want to know where they’re coming from.”

Newbigging says the preliminary nature of the research reminds him of earlier discoveries about pollutants and their impact on the Great Lakes. “Look at the turn-around that’s occurred in lakes like Lake Erie in terms of controlling phosphorus in municipal wastewaters,” he points out, suggesting that a likely next step would be to better understand impacts on fish and other wildlife and other receivers, including humans. It might be particularly worthwhile, he adds, to analyze effluent at the wastewater plant level to determine what is and is not being captured. “It would be interesting to know. I would expect that we would be getting a lot of it out through the process, but it’s been identified in the lakes so perhaps we need to look at the plant effluent to see if it’s there.”

Regardless of the outcome of this research, however, Mason believes the key to meaningfully improving the situation—for wildlife, ecosystems, and people—is to address the very prevalence of plastics in our lives. “Plastics were originally designed with the best of intentions—to replace natural products that were becoming rare,” she explains. “We make something, put it on the marketplace, and don’t think about its lifecycle and what will happen to it in the end. All the qualities of plastic that make it so wonderful from a business standpoint also make it a concern from an environmental standpoint. It’s lightweight, durable, and now we have so much of it we don’t have a handle on what to do with it. We’ve become a disposable society. We throw it away, but it doesn’t go away. There is no ‘away.’” WC

Saul Chernos is a frequent contributor to Water Canada.

The Great Pacific Garbage Patch has attracted considerable attention from journalists and other observers awestruck by the notion of a floating mass of trash hundreds of square kilometres in size. First discovered in 1972, the Pacific patch has an average density of more than 200,000 objects per square kilometre, with sizes ranging from less than a millimetre in diameter to larger, recognizable pieces of litter. But it’s not quite the solid mass one might imagine. This field of debris is, rather, a community of individuals, some suspended several feet beneath the surface, others floating higher up—a kind of flotsam-jetsam anarchy with just one imposed limitation—the whole remains trapped by currents within the North Pacific Gyre. WC