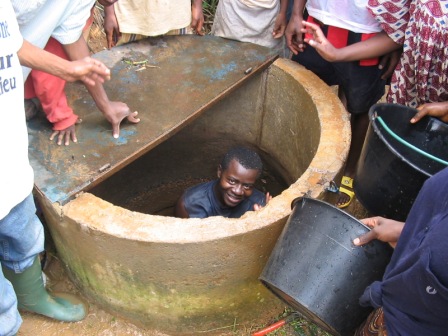 For Saskatchewan , spring runoff season presents a huge risk for private well contamination, especially considering the province’s high levels of arsenic, selenium, and uranium. At the height of this year’s flood crisis in the Prairies, Terry Hanley, director of science, information, and monitoring for the Saskatchewan Watershed Authority (SWA) shared details on the water quality risks for well users.

“We have a database of about 4,000 wells that we’ve tested,” says Hanley. “About 50 per cent of those wells exceed at least one maximum allowable concentration (MAC) or drinking water standard. Now that there’s flooding, there’s increased risk to the 100,000 residents that rely on wells.”

He says that last year, after severe flooding in North Battleford, and North Battleford, 70 per cent of wells in those areas exceeded acceptable nitrate or bacteriological levels. “The MAC for drinking water is 45 milligrams per litre, but we had levels in the 1,500 range,” says Hanley. “There are pretty significant risks, and we expect the same this year.”

That’s why the SWA offers free well tests. “We’ve had E. coli levels in the tens of thousands,” he reveals. “That’s slightly less than treated effluent—it’s usually a shock to people. Just because the water’s clear doesn’t mean it’s good.”

In Manitoba—also affected by the spring floods—the chief provincial public health officer announced that people using private water supplies should boil their water and test it for bacteria. The Province added that it would cover the full cost of well-water testing for affected areas.

In addition to gathering demographics on site visits, SWA assesses the wells. How old is the casing? Are there well caps in place? Have the owners shock chlorinated the wells after major weather events?

They found some surprising statistics. Two out of three wells didn’t have caps or casing that is at least two to three inches above ground. Nine out of ten wells had never been shock chlorinated. “It only takes a few hours to fix these things,” says Hanley, who hopes these assessments will help owners take the simple steps to better understand and maintain their wells.

It appears the program is working. “Of the clients we’ve tested, about 60 per cent have adopted our recommendations,” says Hanley. “That’s huge for us.” WC

For the other story identified on the map, see “State of Emergency.” Thanks to The Water Chronicles for providing recent national data for the map.