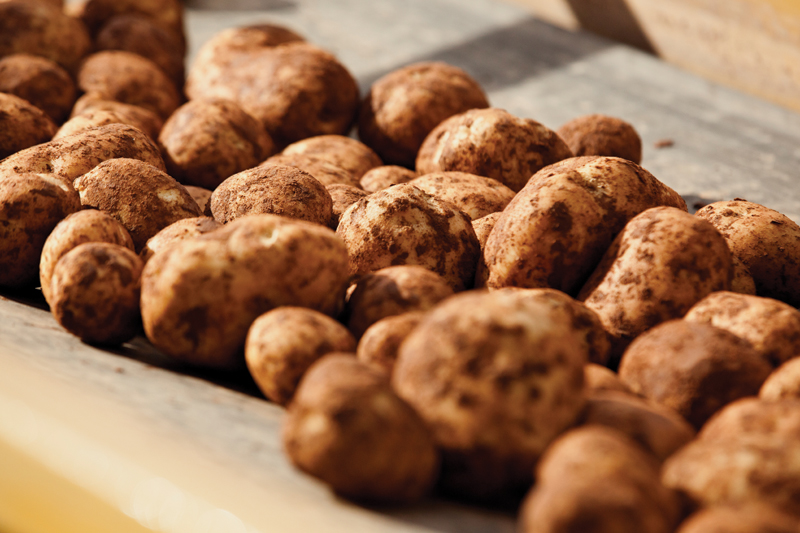 On the East Coast of Canada, a contentious debate rages on over the Prince Edward Island Potato Board’s request to have a moratorium lifted on deep-well water extraction for irrigation. The board, along with industry giant Cavendish Farms, began a full-scale lobby effort in January 2014 to push for deep-well permits, saying science indicates the Island has a high water-recharge rate. This has been met with significant backlash from environmentalists, citizen’s groups, and political parties that say extracting tonnes of water out of the Island’s deep water aquifer is risky business, especially since Prince Edward Island relies exclusively on groundwater.

“High-volume extraction could mean individual wells could dry up. There aren’t a lot of central water systems here in P.E.I.,” said Todd Dupuis, executive director of regional programs for the Atlantic Salmon Federation. “Often the country folk have their own wells, and if they’re in close proximity to a monster well that’s taking a lot of water out of the ground, it can actually really lower the water table to the point where your well no longer produces water.”

The moratorium, which was initially intended to be in place for a year, has been in place since 2001. In the more than 10 years since the moratorium was put in place, the Prince Edward Island department of environment has studied the Island’s water recharge rate. It released a provincial water extraction policy earlier this year around the same time the potato board began its lobby efforts, sparking claims the province is working in the interest of potato growers. The policy noted the province has “abundant groundwater recharge” of approximately two billion cubic metres a year, contradicting recent reports of a dwindling water supply in the province. (For more on this, see bit.ly/peiwater.)

“The department of environment found that […] less than seven per cent of the P.E. I. groundwater is used by all users,” said Gary Linkletter, chairman of the Prince Edward Island Potato Board. “Of that seven per cent, […] industrial uses about 30 per cent and residential about 60 per cent. Currently, irrigation is hardly even a player in P.E.I. groundwater use.

See also  Get Smart on Stormwater to Save Billions

“If there was a real concern about water use, these other users are the ones where a moratorium would actually make a difference. […] We feel it is only proper and fair that agriculture not be subject to the current, very selective moratorium.”

Prince Edward Island potato growers have said that, without deep-water wells, productivity will decline and lead to the reduction of the province’s $1-billion potato industry. Some growers have expressed concerns over staying competitive, especially since American farmers can sometimes harvest twice the amount of potatoes from one acre.

“We’re not even close to that in Canada because we don’t have the longer growing season or access to irrigation,” Kevin MacIsaac, chair of the United Potato Growers of Canada, told The Guardian.

Dupuis expressed suspicion over the new department of environment policy, especially since he said it came “out of the blue.”

“The new water-withdrawal policy makes a case for irrigation for the potato industry and it was a bit of a surprise to us that the policy came out,” he said. “It was pretty much just one provincial department that put the policy together, and it certainly has fingerprints all over it from the potato industry.”

“[Growers] add more fertilizer than they need, and that stuff is very water soluble and full of nitrate and phosphate,” Dupuis said. “There’s always stuff left over: it leeches down into the soil, and the soil in P.E.I. is sandstone, so it is very porous. The water up high is latent with fertilizer and percolates down.”

Linkletter said the contamination of aquifers by fertilizers is actually exacerbated by dry conditions. “Proper moisture conditions for the crop to grow would reduce what fertilizer is left in the soil. […] It would be more likely to reduce problems rather than increase them.”

He added that the deep-well extraction for irrigation would only occur for a very limited portion of the year, and that such wells would be monitored to ensure “responsible supplemental irrigation.”

Since the potato industry has made its request to the province to remove the moratorium, there has been an impassioned response from concerned islanders who are attending usually empty committee meetings in droves. A February 26 meeting was attended by 200 Prince Edward Islanders, including biologist Darryl Guignon, who said, “None of us have been asked anything about this. Nor the department of fisheries and oceans, nor the public! It’s our water for heaven’s sakes, and we can’t even have an input in a water policy?”

Environment Minister Janice Sherry has said the provincial government will not make a decision on deep-well irrigation and the moratorium will not be lifted until there is further proof that such practices would not diminish the quantity or quality of Prince Edward Island’s groundwater.  WC