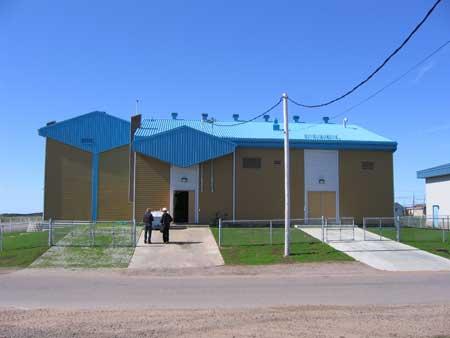 As water infrastructure deficits grow and standards become more stringent, communities across the country are wondering how they’ll cope with the added costs of maintenance and upgrade requirements. For small towns and First Nations, the tax base is small or non-existent. In many cases, water delivery is causing a noticeable strain on resources.

A quick look at a map reveals that while several First Nations, small towns, and villages are close neighbours, many still build and maintain separate water treatment and delivery systems. Are these inefficiencies necessary? In recent years, members of the Federation of Canadian Municipalities (FCM) social and economic development committee asked themselves if neighbouring First Nations and municipalities could join forces to share mutual challenges to improve local infrastructure services, like clean water and wastewater treatment. The outcome is FCM’s newest national program (and the only program of its kind in the country): the First Nations –  Municipal Community Infrastructure Partnership Program (CIPP).

The program seeks to foster relationships that lead to service agreements to deliver community infrastructure services. Service agreements can be either formal or informal between a First Nation and a municipality, and enable one party to purchase specified local services from another. The entire process and program supports FCM’s general philosophy that all orders of government must work together to overcome the challenges they face.

Based on a partnership between FCM and Aboriginal Affairs and Northern Development Canada (AANDC) and supported by the Assembly of First Nations (AFN), CIPP implementation is overseen by a steering committee with members from FCM, AANDC, and AFN—also a first.

Partnerships between First Nation and municipal governments can be used as means to confront infrastructure deficit with increased economies of scale and reduced costs.  Working together can help address past grievances and improve relationships between First Nations and adjacent municipalities to work together and overcome other challenges they face. Eventually, partnership could mean better levels of service for community infrastructure and improved social and economic development opportunities for the community as a whole.

But it’s not all roses, and the process often requires a lot of work. Past grievances and prejudices can hinder the creation of service agreements or the effectiveness of a service agreement that has been put into place. Mismatched election cycles (every two years for First Nations and every three to four years for municipalities) can present a unique set of barriers for community partnerships, such changes to local priorities, weak relationships between councils, and poor corporate memory regarding service agreements and related efforts. Lack of capacity can be a barrier to service agreements, particularly with regard to existing infrastructure, limited resources, and different funding cycles.

FCM suggests that ongoing communication and political cooperation must be the top priorities. CIPP works to address this challenge by encouraging communities to develop communications protocols, friendship agreements, or memoranda of understanding.

Water Canada looked at two partnerships to see how they’ve improved based on their involvement with CIPP.

Port Hardy and the Gwa’sala-’Nakwaxda’xw Nations

After an initial meeting with Kwakiutl First Nation through British Columbia’s Community to Community forum program, the District of Port Hardy took advantage of a travelling CIPP workshop. “It was probably one of the best seminars that I’ve been involved with,” says Rick Davidge, Port Hardy’s chief administrative officer. “They came very well prepared to deal with a broad spectrum of service agreement opportunities that went beyond the three basic pillars—water, sewer, and fire protection—of most agreements between First Nations and municipalities. There are quite a number of areas that we’ve been able to address.”

Port Hardy currently has a 20-year agreement with EPCOR to operate and maintain its water and sewer infrastructure. Davidge says that Port Hardy has close relationships with three local bands, including Gwa’sala-’Nakwaxda’xw Nations. “Two villages are tied to our municipal water and sewer infrastructure, but they’re really outdated agreements,” he says. “We’re in the process of collecting data from meters we’ve installed at entrances to both villages. Current rates are based on old models of per household, per business, per school, et cetera, but we anticipate establishing water and sewer rates on a usage basis, and our municipal council is moving toward metered rates throughout the community. It’s quite an involved process, but the CIPP templates got us much further down the road.”

As a result of the workshop, Davidge says that the communities are in discussion about renewing their basic agreements. “We hope to develop further agreements in areas of recreation, building inspection, and other areas of mutual concern.”

Davidge adds that while the “revolving door” in municipal government and band councils is one the biggest challenges, he was glad to see that the CIPP workshop addressed it. He also liked that it stressed that component of partnerships and how it related to service agreements. “We got down to the nitty-gritty of our communities’ relationships,” he says. “It made us appreciate and understand each other on a different level than we have before.”

“Service agreements are not uncommon around here,” says Barry Gagnon, chief administrative officer for the City of Enderby in British Columbia. “We already have fire protection, water, and wastewater agreements with Splatsin First Nation, but we wanted them to evolve into multi-year agreements.”

Gagnon says Enderby currently supplies treated water to a couple of areas of Splatsin’s neighbouring reserve. The City also receives and treats wastewater from one area, and for fire protection, there’s a defined area that is served by contract.

“It’s always a challenge from a capacity perspective to get communities together to work on these initiatives, but it’s absolutely worth sharing the resources,” says Gagnon. “For example, the Shuswap River is a salmon-bearing stream. Both entities respect the fact that the river is a critical resource and environmentally important, and we agree that we need to protect the water quality. If we can work together to treat wastewater that may otherwise have a negative impact on the river, that’s in everybody’s interest.”

To advance the common interest, Enderby and Splatsin established a joint working committee to propel their ideas for collaboration. As part of the FCM workshop, the two communities renegotiated the three agreements. The next step? “Continued relationship building and exploring joint economic priorities would be our highest priorities,” says Gagnon. Enderby also wants to introduce metering to its (currently flat-rate) Splatsin customers, much like Port Hardy has done. The City’s residents already have metered water and will pay the same rate.

“CIPP is a good program; it helped create momentum for us,” says Gagnon. “It’s a process to plan for the long-term infrastructure and economics needs for both communities. Our relationship with Splatsin is good, but any time you can enhance awareness, understanding, and improved communication, it leads to better relationships.”

The future of CIPP

CIPP plans to continue delivering partnership training workshops across the country to interested First Nations and municipalities. In years three and four of the program, the CIPP team will also be returning to a few communities that have already held workshops to check in and facilitate next steps in their cooperation process.

The importance of CIPP continues to be bridging the gap between First Nations and municipalities by fostering partnerships and creating a collaborative approach that allows CIPP to fulfill its objectives and allow for increased community ownership of the CIPP resources. Moving forward CIPP will carry on working with First Nation and municipal governments helping them to build their capacity and find mutually beneficial solutions.  WC

By Kerry Freek, with files from FCM and CIPP

Are P3s an Option for First Nations?

A session on public-private partnerships (P3s) at the Assembly of First Nations national water conference in March raised some interesting questions. Could a First Nation use this method of procurement for water infrastructure projects? The answer: not likely.

“Many of these communities could not be bondable to a financing package unless they have significant sources of revenues that could be assigned as a payment stream,” says Cynthia Robertson of Parkridge Consulting. “Currently, funds roll into reserves based on population on the reserve. For infrastructure projects, it would require a different financial scheme. The reserve would have to be backed by a government guarantee from Aboriginal Affairs and Northern Development Canada (AANDC). This is due to the fact that a reserve may not able to finance an infrastructure project using a traditional P3 in Canada.”

Northern Ontario’s Bingwi Neyaashi Anishinaabek (BNA) First Nation is currently establishing a network of community-owned businesses and is making plans to build entirely new infrastructure on recently awarded land (see “Breaking New Ground,” www.renewcanada.net). “The BNA will have revenue from various businesses and potential power projects that will create revenues that may be able to securitize for infrastructure builds,” says Robertson. That means the BNA could be eligible for P3s, but could not likely use a CIPP-like service agreement, since partnership requires an adjacent municipality.  WC

Measuring Water and Climate Risk in an Uncertain World