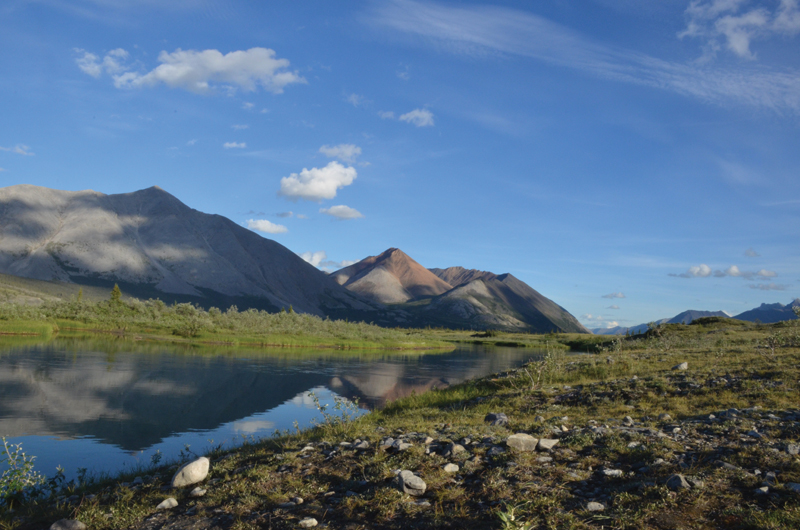 The size of the Yukon’s Peel Watershed is often compared to New Brunswick or Scotland, but the enormity of more than 67,000 square kilometres of land—or 14 per cent of the territory—is hard to digest by looking at a map. The watershed is home to the north end of the Rocky Mountain chain, a network of wild rivers that runs toward the Beaufort Sea, and populations of porcupines, caribous, grizzlies, and wolverines.

The debate over how much of the region should be open to industrial development has pinned northerners against each other since the land use planning process began a decade ago. Although the government manages more than 97 per cent of the Peel, there are four First Nations—Nacho Nyak Dun, the Gwich’in Tribal Council, Tr’ondek Hwech’in, and the Vuntut Gwitchin—with territory in the watershed.

Jimmy Johnny, a Nacho Nyak Dun elder, is worried about the water. He wants to make sure the rivers in the Peel are clean and pure for the communities upstream, like Aklavik and Fort McPherson in the Northwest Territories.

“The water is the most powerful thing. It gives us life, it gives us plants, animals, fish, everything,” he said. “That’s why I’m fighting this.”

For 15 years, Johnny worked for Chris Widrig, a hunting outfitter whose concession is at the headwaters of the Snake, Bonnet Plume, and Stewart rivers. Widrig takes only 28 clients (at just under $20,000 a head for 10 days) out on horseback each summer. They hunt Dall sheep, caribou, grizzly bears, and moose and drink water straight from the river.

Although Widrig spends more time in the bush than most Yukoners, he’s still embroiled in the land use planning debate. Everything, he admitted, is political when it comes to the Peel.

See also  A River Runs Through It

“Some people look at the land and all they see is emptiness. They think you need to build on it or dig it up,” he said. “That’s not the way I see it.”

The Yukon’s land use planning process is rooted in the Umbrella Final Agreement, the self-governing treaty signed in 1993 by the Yukon’s First Nations. It was created to minimize conflict within settlement and non-settlement land.

Conflict, though, has been at the core of the process. In 2011, after seven years of work, an independent, government-appointed commission released its final plan. They had already compiled a draft plan, and then a recommended plan, but were asked by the government to make it more “balanced.” The commission, they believed, was favouring conservation over development.

First Nations said they wanted complete protection but would compromise to 80 per cent in the spirit of co-operation. The final plan stressed that four-fifths of the land should be protected to maintain the ecological integrity of the region. Existing oil and gas and mineral claims could remain, but no roads to access them would be allowed.

In January 2014, the Yukon Party government released the newest version of the plan, almost completely flipping the commission’s work on its head: now, only 29 per cent of the watershed is protected while 71 per cent is open to claim staking. The new plan, the government said, is meant to maintain the ecological integrity of the region while allowing for carefully managed economic development.

The protected area is largely in the headwaters and corridors of the Wind, Bonnet Plume, Snake, Hart, and Peel rivers. No new staking is allowed in these areas, but roads to reach and develop existing mineral claims are permitted. The rest of the region is open to new staking, roads, and mines.

Nobody, it seems, is pleased with the new plan. Environmental groups say the government is ignoring the science of large-scale protection. The Yukon Chamber of Mines has said the plan is too restrictive and makes the region economically unviable. First Nations believe it’s a violation to their treaty rights.

Environment Minister Currie Dixon explained the government modified the plan because they wanted a better balance between conservation and responsible development. “The fact [that] various interest groups on either end didn’t get everything they wanted points to the fact that we did find a balance,” he said, stressing that people worried about the environment just need to look at the plan. The Yukon has more land-base protection—at 17 per cent—than any other province or territory.

The government argues that accepting the commission’s plan could bankrupt the territory. Denying industry surface rights to their claims could result in costly lawsuits.

“We didn’t want to expose Yukon taxpayers to that risk,” Dixon said.

The claim in question is the Crest iron ore deposit along the Snake River, owned by Chevron and discovered more than 50 years ago. Premier Darrell Pasloski called the size of the deposit “astronomical.” He said it would be irresponsible to declare this resource potential off-limits.

Chevron’s project is still highly speculative. A feasibility study showed that building a mine would require a new rail line to Alaska. Getting enough power to the site would be another expensive and tricky problem.

NDP environment critic Kate White said the new plan is undemocratic and throws out seven years of the planning commission’s hard work. “My problem is that they’re telling Yukoners their values don’t have any value,” she said. “Not 100 per cent of people supported the final plan, but I can say close to 100 per cent support the process. Now everyone is shaking their heads.”

She explained that land use plans guarantee certainty and are supposed to be about citizen participation and transparency. “The government is thumbing their nose to their entire process,” she said.

First Nations and environmental groups filed a lawsuit against the government a week after the plan was released. They claimed the government rejection of the commission’s plan amounts to a violation to land-claim agreements. Thomas Berger, the lead lawyer, said he believes the case will be a profound test of whether or not the Yukon government is required to live up to its agreements.

“We didn’t want to take this to court, but we felt like it was the only way,” said Gill Cracknell, the executive director of the local Canadian Park and Wilderness (CPAWS) chapter, one of the plaintiffs in the case. CPAWS believes the government is missing a huge opportunity to protect a rare, intact watershed. “This is an industry plan not based on science and ecology,” she said. “It’s so much against what the public is asking for.”

The court case to decide if the government’s plan is legal will be heard in the Yukon Supreme Court at the beginning of July. Until then, Yukoners—and anyone with their heart in the north—will hold their breath.  WC

Nadine Sander-Green is a writer based in the Yukon. She’s currently working on her first book of essays. This article appears in Water Canada’s May/June 2014 issue.