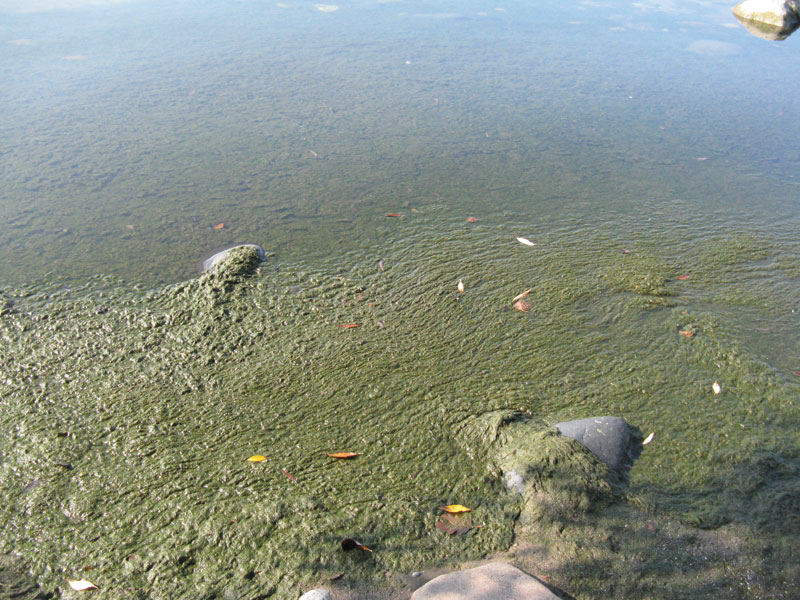 The Duffin Creek Water Pollution Control Plant was supposed to enhance phosphorus removal when an expansion was completed in 2013. Built by the province in the 1980s and later transferred to Durham and York regions, the activated-sludge facility replaced multiple smaller, legacy systems that were discharging into local waterways and seriously impacting water quality. The $600-million project was designed, in part, to increase the volume of sewage the plant could handle, from the current daily flow of 340 million litres to 630 million litres. Infrastructure Canada, which provided some funding, declared the expansion would protect the environment, accommodate new commercial and residential development, and significantly improve local wastewater infrastructure. The environmental group Ecojustice gave the plant a B+ rating, the second highest of a dozen facilities it ranked.

However, the plant’s environmental star has faded significantly. For several years now, a pungent, green algae known as cladophora and commonly attributed to high phosphorus levels has appeared in mid-summer along nearby waterfront areas in Ajax in relative proximity to the plant. Even though Ajax is a member of Durham Region, the town had challenged the plan to increase the plant’s capacity, and a local citizens group, PACT POW, formed around the issue. Federal Green Party leader Elizabeth May spoke at a rally the group held last summer, and a month later, Ecojustice clarified that its recognition was for overall sewage pollution management, including an end to combined sewer overflows, but the organization was not evaluating the plant’s actual net impact on algae growth.

Phosphorus and cladophora are no strangers to the Great Lakes. From the 1960s through the early 1980s, algal blooms were common in the lower Great Lakes. “That was mainly because we used phosphorus-containing detergents,” said Andrew Sinclair, an environmental scientist with the surface water team at Stantec. This led to dead zones in Lake Erie, where high nutrient levels depleted oxygen levels. By the 1980s, however, phosphorus and corresponding algal blooms began to decline. Sinclair attributes the improved water quality to various factors, including a move to phosphate-free cleaners, improved wastewater treatment, and steps by industry to control pollution. However, while phosphorus levels have dropped in Lake Ontario, Lake Erie’s concentrations have been rising, and cladophora has been reappearing in many areas of both lower lakes, especially in rocky areas near shore.

The beaches of Ajax have been no exception. The cladophora’s dramatic odour has left the towns at odds with their regional government. Each side, backed by its bevy of experts, is holding its ground. Ajax says the plant bears the lion’s share of the blame, while the plant’s regional management attributes the phosphorus to outside sources, including runoff from Duffin Creek and from elsewhere in the watershed.

“We have one of the most beautiful, publicly owned waterfronts in the Greater Toronto Area, and it’s been detaching from the rocks and washing up on shore,” said Paul Allore, director of planning and development with the Town of Ajax. “Our residents use that waterfront for special events and recreational activities. It’s seven kilometres long and there’s bicycle paths, benches, and picnic tables. The town’s invested significantly in it—it’s part of our culture—and by August, the rotting stench is driving residents away.”

Allore said his team has assessed area waterways, quantified the sewage-like odours, monitored local wildlife, and concluded the plant is responsible for 97 per cent of the soluble reactive phosphorus feeding the cladophora along the waterfront. “The science is behind us,” he said. “We have a problem on our waterfront, and we strongly believe it’s coming from the plant. Either the pipe needs to be extended further out into the lake, or additional treatment for phosphorus needs to be undertaken, or perhaps both.”

John Presta, Durham’s director of environmental services, sees it differently. “We think we’re doing an excellent job protecting the environment,” he said, describing ongoing monitoring of lake water and nearby tributaries. “It’s clear from the facts—these aren’t models or computer simulations but actual water quality results—that we’re meeting the effluent requirements for the [Ontario] Ministry of Environment and there’s no phosphorus hotspot coming from the effluent.” He pointed, instead, to the numerous smaller creeks and rivers. “When it rains,” he said, “all that runoff, all that murky water, sediment, and everything, there’s spikes of phosphorus loadings that go into Lake Ontario, and they hug the shoreline like a bathtub ring.” It’s been proven in other watersheds, Presta maintained, that wastewater plants produce just a fraction of the total phosphorus loading.

Lines in the sand? Perhaps, though the Ajax shoreline is largely pebbled. The plant is now in the throes of an environmental assessment as a follow-up to the expansion work, to provide additional detail regarding the outfall pipe and officially approve the capacity increase to 630 million litres. Earlier this year, Ajax filed a Part II Order with the environment ministry, requesting the assessment be bumped from a class one to a full one. “Essentially, that’s a request for further environmental study to be done,” said environment ministry spokesperson Kate Jordan. The request is currently under review, and she said the Ministry could deny the request for a full assessment, add conditions to those already imposed under the class assessment, grant a full assessment, or order mediation between the two parties.

Declining to address the Duffin Creek situation itself, Andrew Sinclair said phosphorus can result from non-point sources, such as lakebed sediment, flow from nearby creeks, and runoff from properties abutting the lake, as well as point sources like the outfall from a wastewater treatment plant. While cladophora benefits from nutrients like phosphorus, the algae tends to thrive in rocky areas close to shore. Sinclair even suggested climate change, noting that longer growing seasons and hot weather create great growing conditions for algae and other plants.

Still, he said, it’s beneficial to cut down on fertilizers and take other actions at the personal and local level to reduce the phosphorus load. “We’ve got quite a bit better at point-source control and we’ve improved the quality of some of the products that were causing the issue to begin with. Now we have to start dealing with how we manage our land and grow our food. It’s not necessarily straightforward, but that’s the nature of the new beast of water quality management and watershed management.”  WC