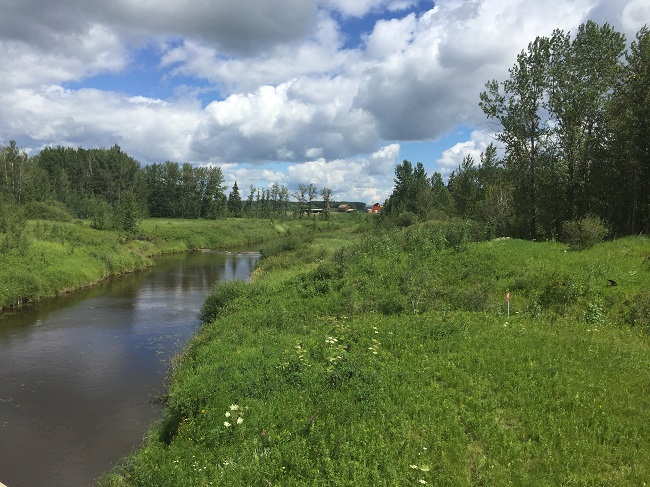 In 2002, Alberta farmer Don Ruzicka was facing the worst drought in recent history. Fortunately, five years earlier, Ruzicka had worked with Ducks Unlimited Canada to restore a wetland on his property which was now functioning as a natural reservoir to retain water. As the drought worsened, his neighbours whose man-made dugouts had dried-up, asked if they could use water from Ruzicka’s still-saturated wetland. Ruzicka immediately agreed. He recalls, “Within one week, Alberta Agriculture had a huge pumping system moving water from one place to another and we filled two dugouts.” Ruzicka also notes: “We still had water; the neighbours had water—it was a win-win situation for everybody.”

The drought of 2001 was the worst experienced by the prairies in the past hundred years, but according to predictive models it will not be the last. Wetlands are among several landscape features known as natural infrastructure (or natural assets), that play an important role in watershed and community resilience against drought. Along with riparian areas, forests, and aquifers, wetlands have the capacity to store water on the landscape and release that water slowly, attenuating the effects of drought and downstream flooding.

Maintaining healthy, resilient, natural infrastructure can provide additional benefits, such as source water protection and mitigating the costs associated with expensive natural disasters. Encouraging more conservation and restoration projects, such as Don Ruzicka’s, is the goal of a new project initiated by a group of provincial Watershed Councils in Alberta.

“Some of our provincial Watershed Councils co-created a new website where we can showcase conservation and restoration projects; and because the projects are showcased beside environmental datasets, we can draw the link between data and action,” says Mary Ellen Shain, Senior Project Coordinator at the North Saskatchewan Watershed Alliance. “Regardless of which stewardship organization leads the project, this website can bring together their projects to showcase the efforts of the collective stewardship community.”

In 2016, municipal leaders who work with the North Saskatchewan Watershed Alliance agreed that riparian areas play a key role in watershed health. Described as the “interface between land and water” by water professionals, riparian areas form a vital buffer of protection between actions on the landscape and downstream impacts to our water bodies. Yet, little was known about the local conditions of these important habitats. Though several municipalities were promoting and supporting riparian restoration projects in their jurisdictions, municipal councillors didn’t have a clear sense of how each of their projects fit into the big picture. This challenge inspired the North Saskatchewan Watershed Alliance to provide municipalities with big picture data of riparian conditions.

See also  Thinking Inside the Box

“Riparian areas are a key interest of our watershed stakeholders, so in 2016 we initiated the Riparian Health Action Plan. It began as a data-creation pilot project to help us gain a bird’s-eye view of riparian areas” says Shain. And as the project moved along, the NSWA councillors “wanted to ensure that the data was coming to them in a form that they could actually use.” Access to data was an issue for less technologically-equipped municipalities, so a user-friendly tool was needed: Thus, the genesis of the Riparian Web Portal.

The Riparian Web Portal is a space to showcase the data and connect to the people who can improve riparian health through on-ground projects. “We workshopped the idea with stakeholders to really clarify its use,” says Shain. Municipal councillors wanted an education-outreach component to the Portal to motivate residents towards action; ENGOs wanted to connect their programs to landowners excited to host on-the-ground projects. “And what better way to do that then on a map?” says Shain. Having map data side-by-side with local projects helps visitors to the Portal connect the dots between issues and how they are being addressed at a grassroots level.

Watersheds are at the heart of some of our most pressing development and economic challenges. As part of a well-functioning watershed, riparian areas—the shorelines at the edges of streams, rivers, lakes, and wetlands filled with plants—are essential to safeguarding communities in the face of flood and drought risks. These transition areas between aquatic and terrestrial land help filter and store water, prevent erosion, and support biodiversity. Understanding the connections between these natural areas and how human-driven interactions at the landscape level upstream result in downstream impacts, encourages partners to work together in support of key water outcomes that we care about most.

Watershed management in Alberta is a partnership-based, voluntary framework. Watershed Planning and Advisory Councils (also called WPACS) are an important part of the framework; for each of the eleven major river basins each Watershed Council brings together stakeholders from that area who are interested in its management. Each Watershed Council is autonomous and has fostered a unique approach to identifying watershed issues, needs, and opportunities; allowing them to explore innovative grassroots approaches to solving those issues. Watershed Councils also work collaboratively at both the provincial and regional scale to advance water and land management. The Riparian Web Portal was one such opportunity. Beginning as a concept with one council, each new additional partnership brought a suite of strengths that helped the Portal grow.

The Riparian Web Portal provides visitors with access to a unique digital library of riparian resources and educational materials. Visitors can also view examples of on-the-ground restoration projects by landowners and conservation groups and are able to upload their own projects to the Portal. Spatial data products and summary reports can help support riparian conservation and restoration, land-use planning, and extension activities by Alberta municipalities, landowners, and stewardship groups.

When Senior Biologist and Director of Fiera Biological Consulting (FBC), Dr. Shari Clare, was brought on to the project, she suggested modernizing the pre-existing methods. The new method, which uses satellite imagery, was validated against existing aerial videography and on-the-ground methods.

Clare calls this tool “strategic from a watershed planning and management perspective,” particularly for “larger spatial extents.” She adds, “This allows for targeting how municipal dollars are spent and prioritizing specific areas for on-the-ground action.” Clare also says that the Web Portal “mobilizes people to start having conversations about riparian areas and riparian conditions. And even if you look at the data and disagree with it, then at least you’re coming to the table to have a conversation about risk management.”

Different methods to evaluate riparian conditions have strengths and weaknesses, but when combined, can create a holistic picture of riparian conditions. While boots-on-the-ground assessments give a high-detail inventory of the plants and soil at a specific site, satellite assessments allow for the ability to scan more areas at once, which help identify priority areas for action or subsequent on-the-ground assessments.

Following the data collection, BlueGeo geoscientist and developer Devin Cairn was hired to create the Portal to house the data and mapping components. He points to the Portal as bringing “complex water issues and the idea of social networking closer together.” Cairn goes on to note that, “the general public is going to need this information in the future with issues like climate change, more pressure on watersheds, and land use change.” He adds that projects like the Portal will not only change how data is shared and built but will mean “public-driven content in the future when it comes to water.”

Although still an emerging resource, the Riparian Web Portal has been piloted to 33 municipalities and Watershed Councils have trained over 250 portal ambassadors, planning staff, and agricultural producers across the province, with positive feedback on the functionality for users. Ultimately, Alberta Watershed Councils hope that anyone interested in water and land management will consider using this new resource to support an ongoing dialogue about riparian management. For more information on this project, visit www.riparian.info.

Heather J. Marshall is a freelance writer and graphic designer.