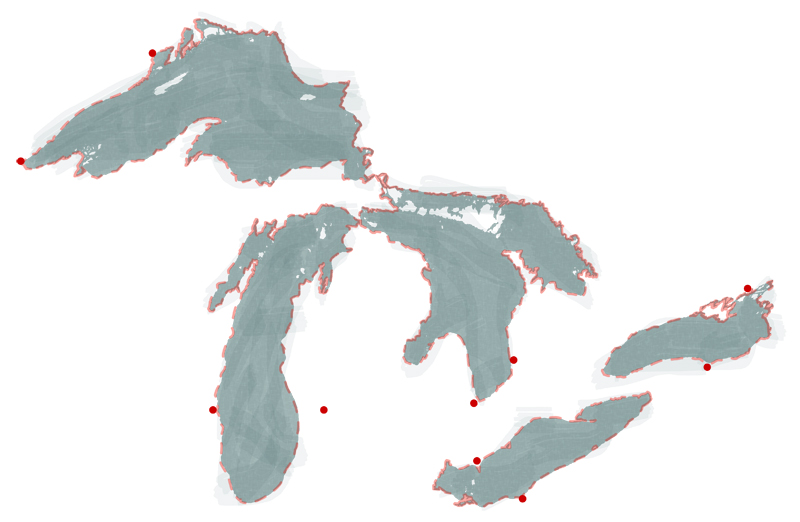 Bordered by two countries, eight states, one province, and more than a hundred municipalities, the Great Lakes hold more than a fifth of the planet’s surface fresh water. Formed some 10,000 years ago by retreating glaciers, this giant, interconnected body of water nourishes not only the surrounding land mass but also the St. Lawrence River and Atlantic Ocean even while enduring toxic hot-spots, eutrophication, and invasive species.

Few impacts of pollution, however, have generated more notoriety than the flow of untreated sewage. Grassroots efforts have worked their way through the halls of power since algal blooms became a problem in Lake Erie in the late 1960s and early 1970s, and finally there’s light at the end of the tunnel. Some particularly chronic wastewater discharges have improved considerably thanks to public awareness, infrastructure upgrades, toughening standards, and protracted legal battles initiated by governmental environmental protection agencies.

Water Canada looks at ten cities, two from each lake, and the infrastructure and programs they’ve implemented to chart a new course.

On June 20, ten inches of rain fell in less than 24 hours in Duluth, Minnesota.

Built along an escarpment and dotted with springs, Duluth knows wet weather flows well. Storm and sanitary sewers were separated from the get-go, yet aging and inadequate infrastructure meant even modest rainfalls caused overflows.

“We’ve spent in excess of $70 million in the past ten years and our sewer overflows are essentially gone,” Shaffer says. The June storm marks the year’s lone escape thus far.

“We’re working on the collection system both on the public and private side, and we plan to continue that into the future,” Shaffer says. “I’m confident that as long as we have normal, typical rain events the City of Duluth will not experience any additional sewage overflows.”

In Thunder Bay, Ontario, flash flooding from a thunderstorm in May overwhelmed drainage infrastructure and the Atlantic Avenue Water Pollution Control Plant.

Thunder Bay has a long history with wastewater management. In the 1980s, to address overflows into Lake Superior, the City began separating catch basins from sanitary sewers and building separate storm sewers.

In 2003, the City upgraded its primary sewage treatment plant and, in 2004, enhanced its secondary treatment plant to employ biological aeration filtration and reduce biological oxygen demand and annual loadings of dissolved solids to the Kaministiquia River and harbour.

The City also maintains downspout disconnection and rain barrel programs through its 1999 Pollution Prevention and Control Plan, which recognized that basements flood most often in neighbourhoods where downspouts connect to sanitary drains.

With combined sewers downtown and separated ones in newer neighbourhoods, Milwaukee, Wisconsin used to record more than 50 overflows a year. Then, in the early 1980s, the Metropolitan Milwaukee Sewerage District (MMSD) began digging new tunnels.

The first, completed in 1994, holds 405 million gallons of stormwater, and MMSD completed a second 89-million-gallon tunnel in 2008. A third phase in 2010 added 27 million gallons, and MMSD upgraded pipes and other sewer facilities.

“Over time these will help the Milwaukee region get to our goal of zero discharges,” MMSD executive director Kevin Shafer says, pointing to a 2035 target date.

Milwaukee recorded its last overflow in June 2011, and the Clean Water America Alliance recognized MMSD this year with a U.S. Water Prize for a watershed-based permitting pilot program that extends to the natural boundaries of Menomonee and Kinnickinnic Rivers rather than being confined to political jurisdictions.

“This is seen as having the potential to be more effective and efficient than traditional strategies in reducing water pollution,” Shafer says.

In the late 1980s, Grand Rapids, Michigan was recording up to 12 billion gallons annually in combined overflows to the Grand River, which flows into Lake Michigan.

Environmental services manager Michael Lunn says the City has spent $250 million to separate 97 per cent of its storm and sanitary sewers and opening a 270,000-gallon stormwater treatment facility.

In 2011, Grand Rapids recorded nine overflows thanks to the wettest spring in a century. However, it’s only happened once so far this year—during a 25-year rainfall in June.

“We’re a green community.” Lunn says. “We like to look at the triple bottom line on things.”

“We used to bypass for months at a time,” says Jennette Walker, the Town’s environmental services technologist.
Overflows became less frequent by the late 1990s, however, following the 30-year, multi-million-dollar separation of combined sewers. A $3-million upgrade to the water pollution control plant, including two new CSO tanks in 2006-07, sealed the deal, and Goderich hasn’t recorded a bypass since February 2009.

In 2009, after the federal government tightened federal chlorine effluent standards, the Town traded its disinfection system for an ultraviolet one. Additionally, the Town mandated eavestrough disconnection back in the 1970s and now sells rain barrels at cost to residents who want them. And, development requirements now include stormwater management.

Sewers aren’t the only factor at play. The Town’s three public beaches are close to an active port, and salt is mined underneath Lake Huron. The Ontario Ministry of Environment regulates wastewater effluent through Certificates of Approval, and the Maitland Valley Conservation Authority requires stormwater management plans in regulated areas.

In 1998, with combined and separated sewers, Port Huron, Michigan entered into discussions with the Michigan Department of Environmental Quality to address 19 outfalls discharging into the St. Clair and Black rivers.

The City decided to separate and upgrade century-old equipment by 2016, and work is nearing completion. Clegg says 17 outfalls should be closed and 94 per cent of the job done by year’s end. The project currently sits at about $170 million, and annual overflow volumes are down to about 10 million gallons.

In the 1970s, Cleveland, Ohio and its immediate suburbs were dumping an estimated nine billion gallons of overflow annually into local waterways. Large-diameter interceptor conveyance systems and in-line storage facilities cut that in half, and the Northeast Ohio Regional Sewer District is under court order to capture 98 per cent of overflows by 2035.

The Euclid Creek Combined Sewer Overflow Tunnel, the first of seven, is slated to open in 2015. Increases in secondary treatment capacity at two of three wastewater treatment plants are on tap from 2016 through 2020, and the sewer district is installing chemically-enhanced systems to treat and disinfect high volumes of wastewater at its three plants.

Separately, the City of Cleveland is planting trees and shrubbery when roads are rehabilitated in order to accelerate the bioretention of stormwater close to source.

When heavy rains left combined sewers discharging in Leamington, Ontario, upstream from Point Pelee National Park, the municipality knew it had to act.

Woods says the bypasses may even have spurred the federal and provincial governments to help finance $52 million in improvements to the sewage infrastructure.

An old aeration lagoon was converted to a stormwater retention basin to direct excess stormwater to the treatment plant for processing. Ultraviolet disinfection replaced an older chlorine system, and crews installed a new activated-sludge component.

From 78 bypasses one recent rainy year, Leamington recorded just one in 2011.

Now, Leamington is busy separating its combined sewers into storm and sanitary ones. Woods says work depends on funding and could take a couple decades to complete.

After more than a century of overflows, Kingston, Ontario is looking to separate combined sewers. It’s no surprise. Some of its infrastructure dates to the late 1800s, and some pipes are limestone block.

Jim Keech, president and CEO of Utilities Kingston, says a 1992 pollution control study noted frequent beach closures and urged an end to overflows. The department responded with more than a decade’s worth of upgrades to sewer pumping stations and trunk lines and the main wastewater treatment plant.

Completed in 2009, the refurbished Ravensview water pollution control plant cost over $100 million and improved treatment from primary to secondary, with biological aerated filters and a hydraulic capacity increase.

Instead of a piecemeal approach, Utilities Kingston works within existing budgets to tackle large areas as one- or two-year projects. Keech says the conversion could be completed within 15 years. “If you do a whole catchment area you can achieve separation at that point as opposed to doing a little bit now and a little bit later.”

Deep 175-million-gallon storage tunnels are key to a regional abatement program. These opened in 1993 and have significantly reduced the frequency and volume of overflows.

“There’s still a few overflows every year but it’s reduced by more than 80 per cent,” Spaulding says.

Getting to zero would take a huge effort, says Spaulding. “I don’t see that anytime soon.”

“But,” she adds, “I see more green infrastructure being put in place, and as we move in that direction we’ll definitely be reducing stormwater runoffs.”

“It’s been extremely difficult and taken longer than anyone would have liked but they’ve done a good job,” Ullrich says, recalling the algal blooms that helped get the ball rolling 40 years ago. He points out, however, that other sources of pollution, including stormwater runoff from rural and agricultural lands, share the blame. While municipalities remediate their sewage systems, Ullrich foresees challenges as 100-year-level storms increase in frequency due to climate change.

GLSLCI’s deputy director, Nicola Crawhall, points out that non-point sources of runoff are the largest contributors of phosphorus to the Great Lakes. “While municipalities have made enormous strides in reducing combined sewer overflows, the evidence suggests we need to work on stormwater management,” she says.

Indeed, climate change and stormwater are in the spotlight. The amended Great Lakes Water Quality Agreement that American and Canadian environmental representatives signed in September acknowledges effects from climate change, among a variety of threats. However, Crawhall says she wishes the agreement had gone beyond frameworks and set actual targets.

“Climate change turns on its head everything we’ve been trying to do…building big enough infrastructure and capacities to treat the water and reduce combined sewer overflows. All that was all well and good, but now we’re looking at another problem of a very different magnitude.” WC