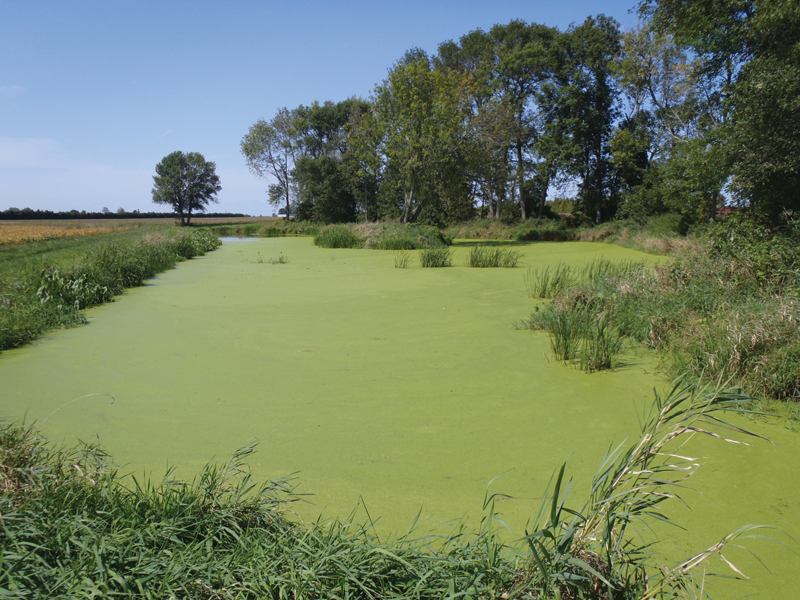 Situated in the agricultural heartland of Ontario, Rondeau Bay is an important ecosystem. According to the Ministry of Natural Resources (MNR), it’s an important spawning and nursery area for bass and pike, a major stopover for migratory birds and a refuge for a number of rare and threatened Great Lakes fish and wildlife species. Over the years, however, the watershed’s vegetative buffer zone has depleted. Increased nutrient runoff has resulted in frequent algae blooms, heavy sediment, and eutrophication—all of which can destroy an ecosystem.

With the help of government and conservation authorities, the Municipality of Chatham-Kent staff completed an analysis of Rondeau Bay’s shorelines. Once they determined the hot spots—largely farms, whose fertilizer runoff, heavy in phosphates and nitrates, can be the cause of algae blooms—they looked into mitigation and determined a solution.

As part of the larger long-term Rondeau Bay Wetland Rehabilitation Project, Chatham-Kent launched a project called Restoring Rondeau Bay’s Ecological Integrity. The plan received $90,000 from the MNR’s Habitat Stewardship Program for Species at Risk program and set out to construct and restore wetlands and ponds designed to capture and remove sediment and nutrients from agriculturally based drainage systems.

From there, the team designed the ponds and applied them to the ground using the municipality’s geographic information system. But it wasn’t as simple as plotting ponds on a map. The job required social innovation, and Chatham-Kent’s mayor, Randy Hope, was up to the task.

Recruiting farmers
For farmers, one of the biggest concerns is taking valuable land out of production. Farmers wouldn’t want the placement of a pond to affect their crop yield and, without their cooperation, the project might not succeed. The solution? “We identified tree-covered or swamp areas that wouldn’t affect their land,” says Hope. Then they communicated the benefits of these ponds in the old-fashioned way—individually, and around the kitchen table.

“It took quite a few conversations, but we gained the trust of the farmers,” says Hope. “In an agricultural community, the pitch gets easier once a few progressive farmers adopt the solution. Once we got a few projects up and running in 2007, they became our advocates.”

With a number of projects already in the ground and complete, Hope says the municipality continues to work with farmers to identify new locations, and they’re looking forward to digging seven to nine more ponds this year. The funds come from several sources including provincial ministries, Ducks Unlimited, and the municipality itself. “That way the cost isn’t borne by a sole partner,” says Hope.

The benefits
Natural filtration works in stages, Hope says. In this case, the first part of the pond collection system filters the water and allows nutrients to settle. The second part holds phosphorus and nitrate-rich water, which is perfect for fertilizer—farmers can capture their nutrient rich runoff and apply it back to their fields, keeping the waste out of the lakes, reducing fertilizer costs, and increasing yields.

“More farmers are moving to irrigation systems and they like the fact that they can draw this water from the pond,” Hope says. “When you draw from the lake you need a permit, but for these ponds no permit is required because they’re on the farmers’ property. It depends on the crop, but some farmers are already using the water.”

For the municipality, ownership holds another major benefit—with an agreement, there’s no need for a permit to dig the ponds and the farmers take care of the maintenance.

Is it working?
The municipality is already seeing results. “We can already see the reduction of algae growth in the bay,” says Hope. And while Chatham-Kent doesn’t have the funds for follow-up studies, Hope is content with confirmation from the farmers that the system is a success. “It’s wasting money to confirm what the farmers are telling you works just fine,” he says.

There will be subsequent studies on nitrates and water quality in Rondeau Bay, however. The pond system will take a while to mitigate the heavy nitrates, Hope says, so it’s difficult to do a year-by-year analysis of the solution’s effectiveness. He says the municipality will likely conduct a five-year analysis in cooperation with the Province. Nutrient modelling and tracking is now being conducted in one tributary of the Rondeau Bay watershed, and teams will be watching for signs of reduction.

Hope, who presented the project for the first time at the recent Great Lakes Week (October 11-14) in Detroit, is eager to share the model with other municipalities. “People need to understand how important it is to reduce phosphates and nitrates getting into the source water system,” he says.  WC