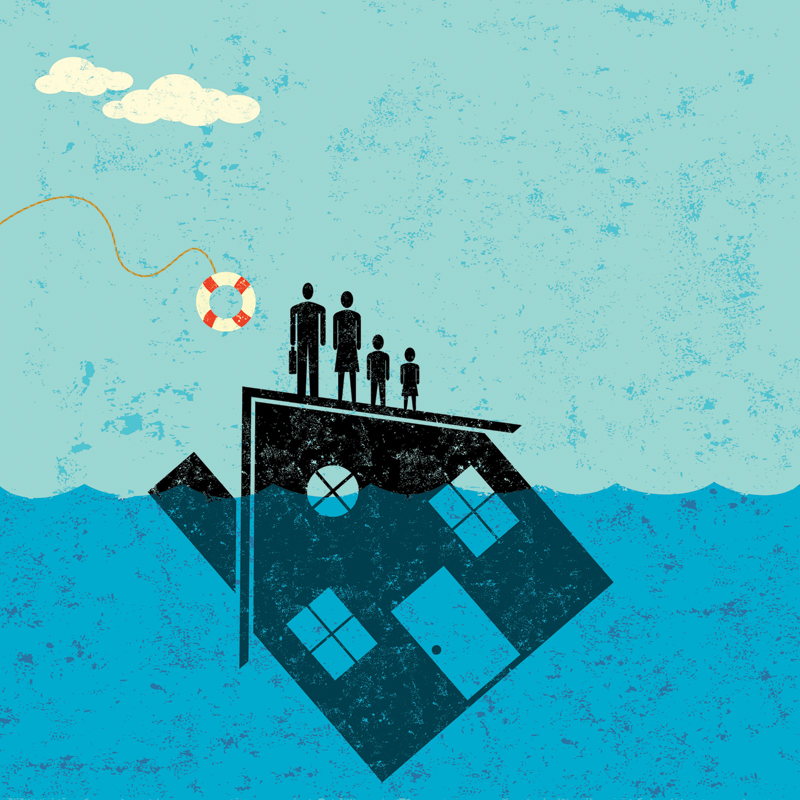 With the 2013 Calgary and Toronto floods still fresh in our minds, and the bone-chilling cold of the polar vortex lingering well into spring, Canadians have been walloped over the head with the realities of extreme weather. But rather than adapt and protect themselves from the potentially disastrous effects of this new reality, Canadians are instead opting to do nothing.

This finding comes from the seventh annual RBC Canadian Water Attitudes Study, which this year focused on extreme weather and flooding. According to the study, 74 per cent of the 2,074 Canadians polled—or three-quarters—agree that climate change will increase the frequency of extreme weather events, but only nine per cent of Canadians have actually taken precautionary measures to protect themselves and their homes.

“I was still astonished to see that, despite this awareness, individuals would not necessarily take measures to limit the impacts of extreme weather events by improving or restoring their water management systems and tools at home. This seems counterintuitive,” said Jean-Patrick Toussaint, the science project manager at the David Suzuki Foundation.

These findings indicate there is room for municipalities to modify water policy and practices in order to enact and incent behavioural changes among Canadians. But with the increasing emergence of extreme weather events, those windows of opportunity are becoming smaller and smaller.

“Now’s the time to move while the memory of [the] floods is vivid and before the next extreme weather event [occurs] because you run out of capacity if you’re struck with these too often,” said Bob Sandford, the chair of the Canadian Partnership Initiative of the UN Water for Life Decade. “I think it’s fair to say that we have a pretty good idea of what the cost of doing nothing is, and it’s mounting.”

The costs are in fact staggering. The Calgary flood alone cost roughly $6 billion, and the Insurance Bureau of Canada indicated in the fall that insured costs are $1.7 billion and growing, making the flood the costliest insured natural disaster in Canadian history. Despite the costs, and the social, mental, and physical toll on Canadians who have been affected, the study found that people continue to be woefully ignorant of water-related issues.

This may be in part because Canadians are largely ignorant about where their water comes from and the systems required to move water from source to tap and back. In fact, two in five or more municipal water users said they were unaware of their water supply, sewage, and stormwater management systems. Not surprisingly, this correlates to the finding that water infrastructure and issues are consistently low priorities for Canadians who tend to place higher value on health care and hospitals.

“Not surprisingly, Canadians don’t really have any awareness,” said Lynn Patterson, director of corporate responsibility at RBC. “We’re not seeing huge jumps in understanding, which seems to speak to the real difficulty in communicating about water in a country that looks so rich and where things go generally pretty well.”

Educating the public about its water supply and the value of water is undeniably important, but awareness campaigns and tours of watersheds and treatment facilities may do little to shift public perception and incent significant behavioural changes. For example, even when some Canadians were made aware of the benefits of having permeable pavement, the study found the majority still did not care. Fifty-three per cent of Canadians said they prefer paved driveways, an increase from last year, and 55 per cent said they wouldn’t change their preference for pavement even after learning that a water-permeable driveway would help mitigate the effects of flooding.

“When did we fall in love with paved driveways?” asked Anthony Westenberg, manager of public relations at Evergreen Brick Works. “Do Canadians think that once you get the water off your property, and it’s on the municipal road, that it’s someone else’s problem?”

Some experts believe the most effective way to get Canadians to value their water is to hit them where they’ll notice: their wallets. “We need to communicate with water users that there is a value to the system, that water is not free,” said Tanja McQueen, CEO of the British Columbia Water and Waste Association. “There is a cost to collecting it, treating it, and delivering it, and those systems need to be maintained and upgraded. We need to be willing to pay for that.”

Carl Yates, general manager at Halifax Water, said, “I believe incentives are the best approach to change behaviour, especially through price signals.” He added that this responsibility will ultimately fall on municipalities and utilities, who will have to raise water rates because he believes, “It’s not an option to do nothing.”

Halifax has recently introduced stormwater charges in the form of a service fee, which in Yates’ words, means, “If you pave over paradise with a parking lot, you pay more.” The city also expects to implement a credit system in the future where customers will pay less if they demonstrate reduced impact to the stormwater system—the most important being delayed runoff as a result of landscaping or on-site storage. (For more Water Canada coverage on water rates, see bit.ly/CDNwaterrates)

Westenberg added that the benefits of enforcing these service fees are that Canadians become “regulated, educated, and rewarded” into becoming more efficient and smart water users. “Taking steps to be efficient with the natural resources we have on hand can have a positive impact on their pocketbook,” he said. “These things don’t have to cost more. We should actually think of them as being ways to being efficient.”  WC

Rachel Phan is Water Canada’s editor. This article appears in Water Canada’s May/June 2014 issue. For more expert opinion on the 2014 RBC Canadian Water Attitudes Study, click here to download the special report, which was created by RBC in partnership with Water Canada magazine.

11 million: the number of Canadians affected by flooding, either personally or through someone they know

2 in 5: fewer than this number of Canadians feel prepared for flooding

19%: the percentage of Canadians that said they believed major immediate action was needed to prepare for major floods

1/3: the portion of Canadians not confident they hold adequate insurance coverage to protect them in the event of flooding

1%: the percentage of Canadians who said stormwater management should be the highest priority for government infrastructure spending