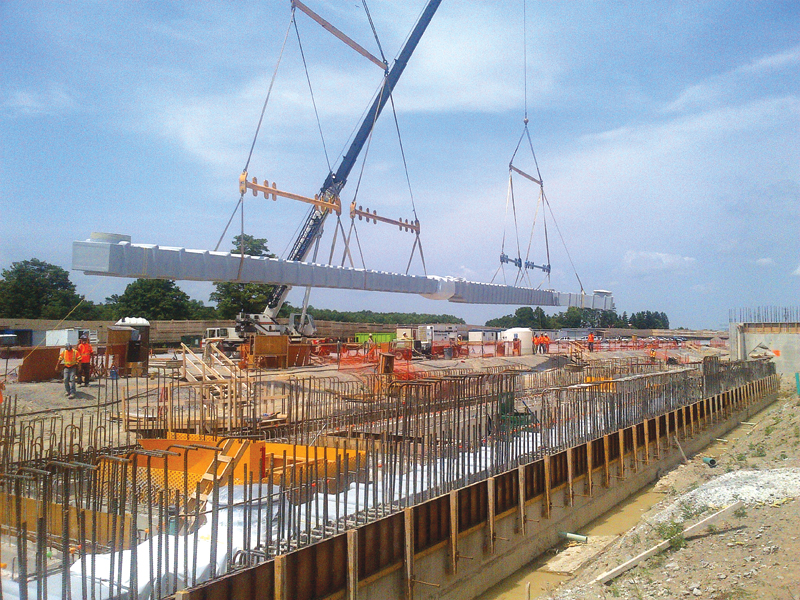 The Seaterra Program, also known as the Core Area Wastewater Treatment Plan (CAWTP), includes centralized, liquids-only treatment facility at McLoughlin Point in Esquimalt and a separate biosolids digestion facility, located at the Hartland Landfill. The existing pump stations at the Clover Point and Macaulay Point outfalls facilities will be expanded to include grit removal facilities and increase pumping capacity to pump wastewater to McLoughlin. The existing Craigflower pump station will be replaced and Currie Road pump station upgraded, along with force main additions and an underground tank to attenuate sewerage flows during storm events.

Currently, the sewage management system in the Capital Regional District (CRD) consists of a six-millimetre screen to remove inorganic material from the waste prior to it being pumped a kilometre offshore into the Pacific Ocean. For years, this solution has been the source of debate—is dilution a sufficient method of treatment, or should the region invest in facilities that treat wastewater to a higher standard? New federal wastewater regulations have rendered the debate moot. Under the regulations, all municipalities above a certain size must implement secondary wastewater treatment before sewage can be discharged into the environment, and these measures must be in place by 2020 for a location like Victoria.

Based on a request for qualification, three teams have been shortlisted and invited to submit proposals: Capital Clear, which includes Dragados Canada and Knappett Projects Inc.; Harbour Resource Partners, which includes AECOM Canada, Graham Infrastructure, and SUEZ North America; and PCL Partnerships, which includes PCL Constructors Westcoast Inc., Veolia Water Solutions, and North America Construction. A preferred proponent is expected to be selected by the spring of 2014.

“The commission is looking forward to receiving full proposals from the shortlisted teams,” CAWTP Commission chair Brenda Eaton said in summer 2013. “The McLoughlin Point Wastewater Treatment Plant will be the foundation of the core area wastewater treatment system.”

The plant will provide increased treatment for the region’s wastewater, and will include heat recovery for the plant and administrative buildings. The project is expected to reduce volume and incidents of untreated water being discharged, and will meet all of British Columbia and Canada’s wastewater regulations. It is expected that the plant will account for a full third of the $782.7-million price tag. Funding will be divided between the municipal, provincial, and federal governments: $253.4 million from Ottawa; $248 million from the province; and $281.3 million from the Capital Regional District.

Construction of the McLoughlin Point Wastewater Treatment Plant Project is anticipated to get underway in summer 2014 with completion in 2018.

Owner: The Regional Municipality of York

This project has been in development since 2002—though the EA was not approved until early 2010. The earth pressure balance tunnel boring machines, which avoid requirements for dewatering and impacting the aquifers, and the segmental precast concrete tunnel lining, have both been procured. Hatch Mott MacDonald and AECOM (in a joint venture) have completed design of the tunnel, shafts, and surface facilities, as well as conforming the contract documents. Project design involves a 15 kilometre long, 3,000 millimetres diameter tunnel with 17 access shafts ranging between four and 48 metres in depth and diameter varying from four to  14 metres.

One of this project’s challenges includes moving sewage between two municipalities. “The route runs through the City of Markham and the City of Pickering [in Durham Region],” Grant Robinson of the Regional Municipality of York said last year. As a result, a good community relations plan plays an important role.

“We’ve got 15 sites along the 15-kilometre alignment, and several of these compounds are close to residential areas,” Robert Kerrigan of Hatch Mott MacDonald said. “Additionally, we have to connect this new tunnel sewer into the existing one at two locations, both of which are in the middle of residential areas.” Odour management, he says, is a major challenge.

That’s where innovation comes into play. AECOM’s Christopher Sandink said that, upon completion, the odour management system will convey air countercurrent to the liquid flow to handle odour issues. “That hasn’t been done before,” he said. “Using large fan systems, the odour control program will ensure that air from the sewer doesn’t enter Durham Region and air is processed in York Region.”

Construction began in 2011 and is scheduled for completion by 2016.

Like the Southeast Collector Trunk Sewer, the Hanlan Feedermain (part of the larger Hanlan Water Project) is needed to service a growing population. It will supply water to the Region of Peel and neighbouring municipalities, such as York Region, and provide redundancy to the existing feedermain.

The Hanlan Feedermain will run approximately 14.5 kilometres from the Lakeview Water Treatment Plant on Lake Ontario to the Hanlan Reservoir and Pumping Station at Tomken Road and Britannia Road East. Part of the same project, the 1,500-millimetre wide Mississauga City Centre Subtransmission Main will run approximately six kilometres from the Hanlan Reservoir and Pumping Station to the intersection of Cawthra and Burnhamthorpe roads. As part of the York-Peel Water Agreement, Peel Region will provide water to York Region via the feedermain. In exchange, York Region will be funding 35.6 per cent of the feedermain costs.

The existing primary plant is only capable of removing 40 to 60 per cent of materials in the wastewater, which is then pumped directly into Burrard Inlet—a long-time matter of concern for some environmentalists—and is located on land leased from the Squamish Nation. The new plant will be able to remove more than 90 per cent of suspended solids and will be located on a site two kilometres east.

Construction of the new facility will enhance environmental protection and fulfill the commitment made in Metro Vancouver’s Integrated Liquid Waste and Resource Management Plan  (bit.ly/vanwaste). Decommissioning of the existing plant will take place once the new facility is commissioned.

Hamilton’s main wastewater treatment facility will be upgraded, which is a change in scope from last year’s guide when it included an expansion component. The main objective of this future work is to improve effluent water quality and increase treatment for wet weather flow. The program will be delivered through several sub-projects, including a new 1,700-megalitre-per-day raw sewage pumping station and improvements to secondary and new tertiary treatment (with the exact treatment technology yet to be selected). Also included is a new chlorine contact tank, a new tertiary effluent outfall, upgrades to the Red Hill Creek (such as widening the creek and works to mitigate erosion), upgrades to the power supply, electrical distribution system and standby power, and other ancillary upgrades. The long-term goal of this initiative is to improve the quality of effluent flowing into Hamilton Harbour, and ultimately, to make a significant contribution toward de-listing the harbour as an “area of concern” identified under the Great Lakes Water Quality Agreement.

*The project scope changed. The total project cost is now $332 million, down from last year’s estimated $600 million, with the federal and provincial governments each contributing $100 million. WC

These projects were researched as part of the Top100 Projects 2014 report in ReNew Canada’s January/February 2014 issue. They are ranked according to value.