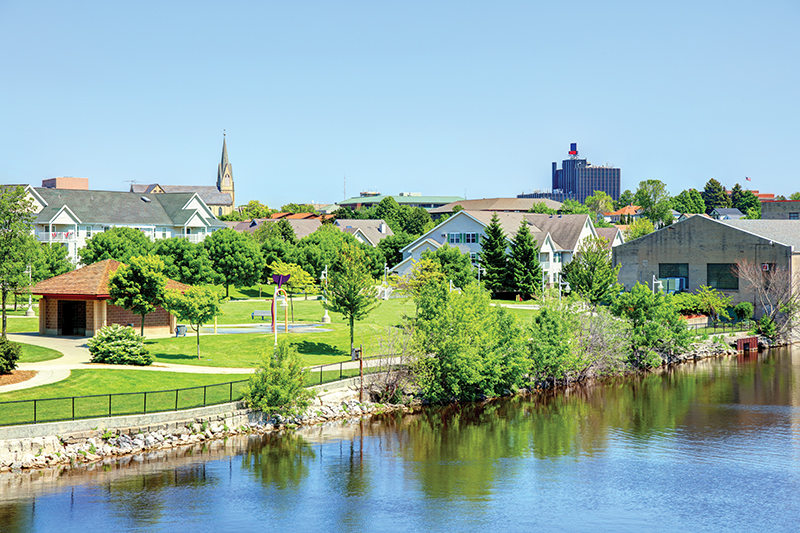 To better appreciate what that entails, and where the immediate needs for funding lie, Water Canada sat down with the chair of Great Lakes and St. Lawrence Cities Initiative, Mayor Michael Vandersteen of Sheboygan, Wisconsin.

First of all, can you provide some background on what  exactly the organization is?

Our major focus this year is infrastructure and erosion mitigation. We are calling on the U.S. Congress and (Canadian) parliament to include funding for water restoration priorities in upcoming stimulus programs. Our priorities are to fund safeguarding drinking water with modernized clean water infrastructure. This includes our wastewater treatment plants, our water utilities. Many of these systems are very, very old, and some of them are right on the edge of our lakes. And so, they are being challenged by the high water situations, and not only do we need to protect those, but we need to keep up with the replacement (of the infrastructure).

And then, we want to help communities respond to the coastal erosion and the impacts of extreme weather events. The Great Lakes are at one of the highest levels I’ve ever seen, and it’s really causing a lot of problems along the lakeshore: our beaches are disappearing, our bluffs are sliding in to the water, and it’s challenging much of the revetments and other things we have to keep the wake in its place. And communities need to respond to that to protect themselves and eliminate some flooding.

What is the greatest need for investment in the Great Lakes and St. Lawrence region?

The most immediate need is the flooding mitigation. That’s the challenge right now because of the high water. We are going to need several years of drier conditions in order for that lake level to subside. We’ll also need some years of very cold weather to cut down on the evaporation in the winter months.

Are there specific projects that need to receive targeted funding, or is the focus more on the general need for new infrastructure in certain sectors?

What we did in order to help our discussions out with Congress was that we asked all of the cities that participate to take a survey and give us information on the projects that they have ready to go. And we’ve specifically identified $500-million in projects for coastal erosion mitigation. We feel that, given certain formulas, that we create over 400,000 jobs in the region if all of those were approved and under construction.

There’s a greater need that we’ve estimated to be about $20.5-billion for water infrastructure, including this erosion mitigation, for future projects. Just in my city (Sheboygan is on the west side of Lake Michigan almost 60-miles north of Milwaukee), we’ve got a 100-year-old water intake to Lake Michigan into our water utility and that needs to be replaced. That’ll be a $29-million project.

And on the south side of our city we have a sewer line that’s right along the lake’s edge, and again that’s being challenged by the high water so that needs to be reinforced and re-lined, because the line is about sixty years old. So those are just two projects in this one municipality, and that last one is about a $13-million project.

How much of this investment needs to look inland, looking at the impacts of the rivers and streams that are feeding into the Great Lakes and the St. Lawrence?

I think that the rivers are going higher as well, so that’s causing flooding upstream in many of those rivers.

There is the phosphorous problem, and that’s something that goes further. We have to look at convincing people in the agricultural industry to change their practices so not all of that phosphorous goes downstream and gets into the lake. Lake Erie is the one that is having the biggest problem with that right now, and Lake Erie is a shallower body of water, so it’s affecting it much quicker.

There’s elements of that problem that exist in Lake Superior, Lake Michigan, and some of the other lakes as well. And so, it’s a growing problem that, if we don’t address it in these larger lakes, we’ll have a bigger problem every year.

Where do you stand right now with trying to get the government to support your funding requests?

The Senate has resisted some of our ask. They feel that they’ve appropriated quite a bit of money in the first COVID bill, but there were so many restrictions on it, many communities couldn’t use that money for some of these projects. They’re talking about maybe loosening the requirements that are on those monies. So that may help a little bit, but we still need another program down the road. There’s a new project coming out of FEMA called RISK (Risk Mapping, Assessment and Planning or Risk MAP); that might give us a way to fund some of these projects. And there’s also another that’s coming through, I think they’re calling it STORMS. Both of those could give us some further help but they’re probably not going to be approved until the next congressional year. It’s nothing that is going to give us an immediate lift to help the economy.

If we don’t take care of those erosion and flooding problems it’s just going to make things worse. It has been proven that a dollar that has been spent today to prevent these issues is going to save you ten dollars down the road.

It’s clear that there is still a lot of work to be done to convince governments on both sides of the border to invest in water infrastructure for the Great Lakes and St. Lawrence region, but thankfully there is a dedicated effort to address these issues amongst municipal leaders.