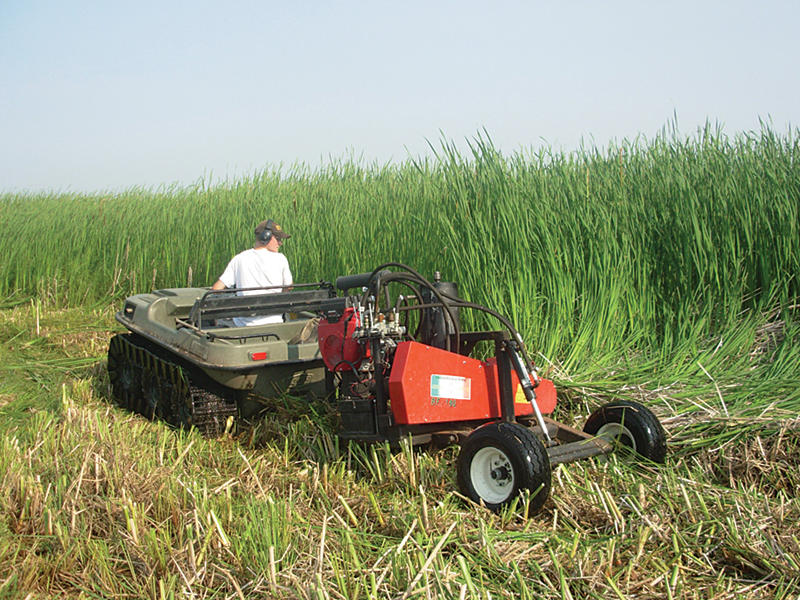 “Anybody who thinks this is a run-of-the-mill problem is wrong,” says John Fjeldsted, executive director of the Manitoba Environmental Industries Association (MEIA). “Make no mistake—this is a world-class problem. Maybe we should think of a world-class solution.”

He’s referring to Lake Winnipeg’s blue-green, eutrophified hue, which demonstrates that its phosphorus loading problem isn’t getting any better. Several non-point watershed sources, notably agricultural and stormwater runoff, are contributing two-thirds of the phosphorus that is posing an increasing danger to what has been called Canada’s “sickest” lake.

The answer, according to Manitoba’s International Institute for Sustainable Development (IISD), comes in the form of a sustainable development opportunity, resulting in a combination of economic and environmental benefits.

Last November, in partnership with IISD and the University of Manitoba, the provincial government pledged $150,000 in funding for one example of the bioeconomy proof of concept: a pilot project at Lake Winnipeg’s Netley-Libau Marsh. In the project, about 200 hectares of marsh grasses will be harvested. These grasses naturally store phosphorus—think of the wetland as the lake’s kidneys—and can be turned into a renewable, clean biofuel product, such as pellets, that can be used in place of fossil fuels for space heating. With similar projects, IISD and its partners could generate carbon credits.

In theory, the solution is a win-win: while encouraging the restoration and maintenance of wetlands for Lake Winnipeg’s clean future, it generates capital and provides an alternative to coal.

“This project is a practical example of the bioeconomy concept,” says Henry David Venema, director of IISD’s sustainable natural resources management and the Water Innovation Centre. “We’re not just spending on an environmental issue; we’re investing in new value chains. We estimate those to be in the multi-billion-dollar range.”

The initial goal, however, is to better understand the marsh, says Richard Grosshans, research associate with IISD and senior project manager for the Netley-Libau project.

“We’ve successfully shown that Netley is a critical part of the system, but we want to understand more about the nutrient cycle and its importance to the health of Lake Winnipeg,” says Grosshans. He says the two-year study will also help determine logistics, possible users, and regulatory requirements.

Some industry players, while confident in the technology and the bioeconomy concept, do not place confidence in continued support from the government.

“A federal official recently said that, with respect to Lake Winnipeg, provincial and federal officials are ‘like field mice scurrying away from a weasel,’” says Fjeldsted, who believes in the potential success of the Netley-Libau project. “Can we transfer the level of creativity and vision [of this project] to those who are going to make political decisions?”

Venema puts more weight on the Province’s recent gestures. “Not only was the funding announced at the Lake Winnipeg Basin Summit, it was also noted in the Throne Speech and described as a real opportunity for innovation. It’s an indication to me that [the Province is] moving past one-dimensional environmental thinking,” he says.  “When the premier was questioned about Manitoba’s commitment to carbon offsets, he referred to Netley-Libau as evidence of approaching mitigation projects from a co-benefit perspective.”

For Fjeldsted, it’s all about timing. He worries that, without more decisive commitments and swift movement from the government, Manitoba will lose its chance to develop the concept and be forced to look outside of its borders for solutions to Lake Winnipeg’s rapid disintegration. “I’m not fond of thinking about a future in which we lose our opportunity to develop solutions at home,” he says. “But it’s a risk.”

Glenn Crook, VP of commercial markets for RBC‘s Winnipeg operations, agrees. “If we pause to think about things for too long, there’s an opportunity cost. The greatest successes in the shortest period of time will create confidence in investors and the money will flow—right now, awareness is the number one challenge.” RBC’s Blue Water Project has made a $300,000 contribution to the Water Innovation Centre to address Lake Winnipeg’s challenges.

“We can’t afford to wait,” agrees Venema. “Unless we’ve got a strategy that generates co-benefits and an immediate benefit to the lake, we’ll dilute or lose any momentum we had.” He points out the difference between this solution and many others: it’s not expensive. Costly projects require more red tape and investment, and that’s one reason that Venema remains confident. “Netley-Libau will demonstrate that environmental programming doesn’t have to be expensive—it can pay for itself and make money.”

For now, Netley-Libau remains a lab-scale project. Venema says bringing it to the commercial pilot stage requires serious feasibility studies, and Lake Winnipeg Foundation board member Alex Salki claims that the wetlands must be restored before they can be utilized as a resource. “We have a long way to go before we can suggest those wetlands can be used for economic benefit,” he says.

Salki has a point, says Grosshans, but argues that Netley-Libau is merely a proof of concept. “This type of research could be applied anywhere,” he says. “Stormwater retention wetlands, polishing lagoons for wastewater treatment lagoons, tertiary wetlands—all of these areas are potential biomass sources.”

“We all understand now that the solutions are not in the lake, they’re in the watershed,” continues Grosshans. In the long run, application of the bioeconomy concept, as part of a broader solution that includes source water protection measures, means helping Manitoba better manage its nutrient loads. For instance, placing a dollar value on the natural protection that a wetland provides could convince farmers to stop draining and cultivating wetlands to maximize crop output on their properties. If the bioeconomy concept takes off, they could gain further income by harvesting the biomass. Finally, these savings could lead to the more expensive technological upgrades that would help deal with the phosphorus problem at the source. “It’s a slow process, but it’s definitely going in the right direction,” says Grosshans.

Despite his concern about government uptake, Fjeldsted is positive, too. “There’s work ahead, and I’m confident that with the right message, the people of Manitoba will care and we’ll get the momentum we need to move forward.”

Bureaucracy and funding aside, timing is an issue for the Lake’s health. “We can’t afford to do nothing,” says Venema. “Nor can we afford to go in the wrong direction, chasing phantoms. The urgency is an opportunity to do things bigger and better.”  WC

Climate Atlas of Canada Launched at the ROM Today