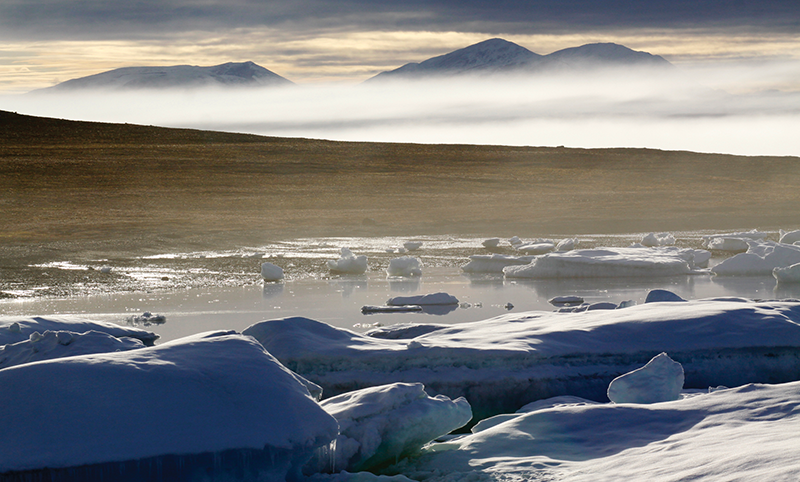 It is estimated that 37 per cent of Canada’s total freshwater is contained in the three territories. In spite of this abundant resource, water can be a scarce commodity, particularly in Northern communities that require a clean source of water year-round.

Winter can last eight to ten months of the year, and in winter, most of the surface water is frozen with ice up to two metres thick covering it. The north is also a desert with most regions receiving less than 250 millimetres of annual precipitation, most of it as snow.

Community water supplies come from lakes and rivers, and provide either year-round, or a seasonal water supply. To use lakes and rivers year-round as a water source, the surface ice, up to two metres thick must be taken into consideration. The ice formation can damage the piping in lakes if it is placed in water, which is too shallow, and in rivers it is vulnerable to damage, particularly during spring break of river ice. Lakes and rivers that provide a seasonal water supply are used to fill long-term storage reservoirs. Nine Nunavut communities have engineered storage reservoirs that have sufficient water stored for up to a year of the community’s needs. An allowance for the formation of ice must be considered in the design of these reservoirs.

Proximity of water to the community itself presents another challenge because of the cost of roads and pipelines, including the operation and maintenance to keep the roads and pipelines functioning. At nearly $1 million (Canadian) per kilometre to build for a road and a pipeline in some locations, the economics places distant piped water sources beyond the reach of most communities. Add to this cost the potential for pipeline freezing, and the severe operating conditions during blizzards, and closer becomes a lot better.

Drinking water is disinfected in Nunavut before delivery to the users. More substantial treatment using filtration technologies is being introduced into Nunavut communities to provide a multi barrier against the potential for drinking water contamination. Water treatment improvements are encouraged by public health officials, and may ultimately be mandated by public health regulations.

To read the full article, check out the January/February 2020 issue of Water Canada.

Ken Johnson is the director of Arctic engineering at EXP.

Government of Nunavut declares state of emergency for Iqaluit

Government of Canada Releases Report on the State of Marine Ecosystems...