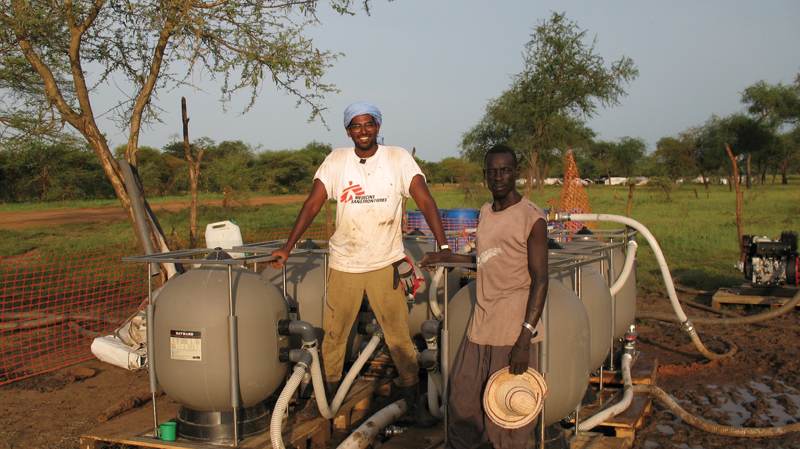 Despite its name, Médecins Sans Frontières (MSF) is not just doctors without borders. When recent Ph.D. Syed Imran Ali became involved with the organization, he learned that professional water and sanitation engineers have something important to contribute to MSF’s international work.

Water Canada: How did you become involved with MSF?

Syed Imran Ali: I’d been doing my Ph.D. research [on safe water and public health] in India quite steadily for some time. In the summer of 2010, the floods in Pakistan began. These kinds of floods devastate 20 per cent of the country—there are mass displacements, stories of cholera outbreaks, and waterborne diseases everywhere.

Pakistan was on my mind for a week or two. I went to a lecture about a probabilistic model for predicting flood events. It was very abstract, very mathematical, very sophisticated; I didn’t understand it. It felt very strange sitting in a lecture hall when there was a real flood happening next door.

Eventually I left the lecture and started calling NGOs, telling them I was a Canadian engineer of Pakistani origin working in India who wanted to go to Pakistan to work in the floods. “We can’t do anything for you,” they said. They were confused by me! I called a dozen places and eventually connected with MSF Pakistan.

I got [in touch with] the head of the mission. “Can you run a water treatment unit?” he asked. I hadn’t done it before, but said I could probably figure it out. He asked for my CV, I got a call from London, they vetted me, and two days later I was flying into Pakistan.

That one-month emergency mission was my first experience working with MSF. My task was simple—to set up a water treatment unit to provide a water supply to MSF facilities, the camps in the area, and the network of oral hydration points. I got the distribution system operational, trained the local staff, and left.

Since that time, you’ve been on another mission, right?

Yes. I finished my Ph.D. last year and completed the official MSF training, and then I was offered a mission in South Sudan. I went to Maban County, on the border between Sudan and South Sudan. This area is virtually untouched. When the refugees first arrived, the United Nations had to build a road. It could take about three hours to travel between camps within 40 kilometres because it was rainy season and the road was just mud.

Those environmental conditions must have made supplying water very difficult.

It was. The refugees are settled in an area called Jamam. In the Maban language, jamam means swamp. Huge swaths of the camp were flooded, latrines were flooded, and the conditions eventually led to acute watery diarrhea issues and a hepatitis E outbreak. When [refugees] arrived in the camps, things got a little bit better. People had access to medical services and food, but the environmental conditions were such that an outbreak was just waiting to happen.

How did the NGO teams bring water to the camp?

Because you can’t build wells in black cotton soil, Oxfam volunteers were using water from a borehole 15 kilometres away. That borehole was very productive, but it was expensive to truck water to the camp. Eventually, the Red Cross built a pipeline to the camp, which cost a couple million dollars and took a long time.

By September, the pipeline was ready. People’s heath really improved, but the system was vulnerable. You had one borehole, one pipeline, and one pump. If any failure happened, it would affect the camp’s entire water supply.

Eventually, the pump failed, and Oxfam asked us to supply water for the camp. We had the same kind of emergency water treatment units I used in Pakistan: assisted direct pressure filtration units. We took water from hafirs, manmade ponds that collect water during the dry season. People use them locally to feed their livestock, but sanitation becomes problematic when a camp is situated around a hafir. Obviously, we had to implement a lot of treatment. For three weeks, we supplied water to half of the camp. Oxfam took over until the pipeline was back in service.

Now that you’re back from South Sudan, what’s your plan?

At the camp, I started noticing another problem. Household monitoring of the chlorine levels showed that even when the chlorine performance improved at the camp’s tap stand, some decay was happening between it and the household. I designed a study to look at the rate of decay and see if the chlorination guidelines are justifiable. Now I’m trying to build a stronger evidential base for what the guidelines should be. The decay doesn’t seem to be linked to water-handling practices—it might be temperature driven. When I left South Sudan in the dry season, the temperature was around 50 degrees. In the tents where they keep treated water, it’s probably 55 to  60 degrees. In that setting, it might not be effective to chlorinate. Within six hours, the chlorine is mostly gone, and you have no protection.  WC

Kerry Freek is Water Canada’s editor. This article appears in the September/October 2013 issue. Visit Syed’s blog, A WatSan in South Sudan. If you know of a young professional you’d like to see profiled, please send an email with the details to kerry (at) watercanada (dot) net.