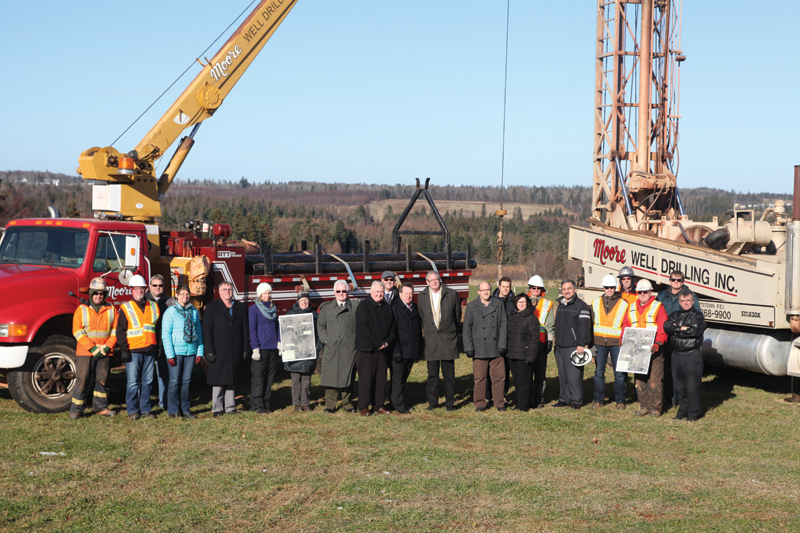 The birthplace of Confederation is gearing up for a major change—at least in regard to the monthly water bill. In October 2013, Charlottetown city council approved plans that will place all homes and businesses on water meters by December 2019. Many islanders believe such metering regulations will help conserve precious groundwater reserves in quickly drying watersheds.

Currently, all of Prince Edward Island uses groundwater for their water supply. Charlottetown, a town of 40,000, specifically relies on the Winter River watershed, which has declined significantly in recent years. Levels have remained so low that the city has begun the process of drilling five new wells into the neighbouring Miltonvale Park watershed.

Don Mazer, co-chair of the Winter River-Tracadie Bay Watershed Association, says low water levels in the watershed relate to “the amount of extraction by the city of Charlottetown.” But Edward Rice, Charlottetown city councillor and chair of water and wastewater, maintains water usage in Charlottetown is not increasing. Instead, he blames hotter summers and decreased rainfall for the watershed’s failure to regenerate.

While the reason for the water shortage may be up for debate, there is no doubt that metering provides a sense of fairness and can contribute to more sustainable water usage when implemented correctly.

The move towards a metered system started decades ago with businesses and commercial properties. In 2010, the city began a voluntary metering program to encourage residents paying a flat fee to adopt a metered system. The newest mandate will address Charlottetown’s more than 7,000 remaining flat fee customers, requiring the installation of meters at no additional cost to the consumer.

Charlottetown residents have been aware of the need for water conservation for more than a century. In 1880, the Water and Sewer Utilities Commission was formed at the request of local residents, who worried that water and wastewater on the island required better management. Ramona Doyle, projects officer with the Charlottetown Water & Sewer Utility, recounted the city’s numerous modern efforts, including a toilet rebate program, the sale of rain barrels, a showerhead exchange program, a leak awareness campaign, city-wide water restrictions, and the hotel water audit program, to name a few.

Councillor Rice spoke proudly of his constituents and their open-mindedness in accepting water-saving initiatives. “I think they’re driving us,” he said in regard to the many messages he has received on grassroots efforts to conserve, including the use of air conditioner condensate to water indoor plants.

But in a place that has already dedicated many years and significant efforts to water conservation, will metering make a discernible difference? The answer may be in the dollars and cents. Very high rates could force unprecedented conservation without savings for consumers, while lower rates could be a step backward in managing water consumption. The successful reception of the metered system likely depends on wise choices by the utility as they adjust rates going forward.

Charlottetown’s move toward mandatory water metering will take place slowly over the next seven years. About 1,000 customers will be switched to the new system each year to allow for the gradual adjustment of rates. “It’s going to cost somebody, somewhere,” David Zetland of Aguanomics says, implying that the cost of installing meters will likely be reflected in new water rates.

Many one or two-person households have requested to move to metering because they are currently charged a flat rate that assumes every house has four people. This raises the question about whether customers are genuinely motivated to conserve water since they will likely see an immediate and drastic reduction in their monthly water bill. Zetland believes there will always be an incentive when potential savings are involved, saying, “It’s like comparing an SUV to a compact car. Your gas bill will drop, but if you leave your car running, you’ll notice.”

Does Charlottetown’s receptive attitude toward metering have implications for other blue initiatives? It’s an important question for a city whose potable water concerns are, perhaps, second only to their need to prevent future incidences of stormwater/wastewater overflow into the city’s harbour at Navy Quay. The separation of these lines, already underway, could be a first step toward implementing a city-wide greywater system.

At this point it seems there is little hope that conservation alone will lead to a solution for the depleted Winter River watershed. Critics assert that with the long-standing watershed so far gone, Charlottetown’s sustainable drinking water solution depends on innovative technology. Doyle believes that even with a mandatory metering system, “As time advances, there is no doubt that provincial regulations will open up to consider more opportunities for recycled or greywater use.”  WC