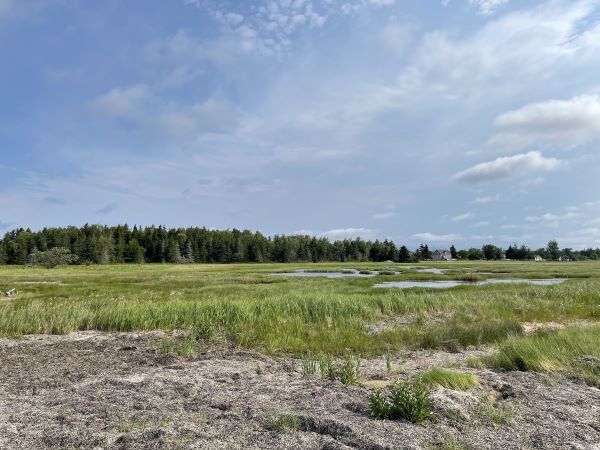 Fredericton, NB – More than 250 acres (101 hectares) of coastal habitat near Village-des-Poirier on New Brunswick’s Acadian Peninsula is being conserved by Ducks Unlimited Canada (DUC) thanks to a donation by the estate of Bernard and Corinne Jean and funding from the Government of Canada’s National Heritage Conservation Program, part of Canada’s Nature Fund.

Since the 1700s, more than 65 per cent of New Brunswick’s salt marshes have been lost to coastal development. This is an alarming statistic: not only are these increasingly rare ecosystems important habitat for wildlife including migratory birds and marine crustaceans like young lobster—they’re critical pieces of natural infrastructure in the fight against climate change.

Rising global temperatures are melting glaciers and sea ice, pouring an excess of water into Earth’s oceans. This is being exacerbated by the fact that southern Atlantic Canada is slowly sinking in response to the last ice age. Here in Atlantic Canada, sea levels are expected to rise by one metre by 2100, leaving many of our coastal communities vulnerable to storm surges and flooding. This is where salt marshes come in.

These ecosystems, including the newly conserved habitats near Village-des-Poirier, can act as a barrier between coastal communities and an increasingly unpredictable ocean. But it’s becoming increasingly evident that restoring and conserving salt marshes—as DUC has been doing for more than 15 years—isn’t enough. We need to conserve the lands around them too.

As ocean waters creep higher and cause erosion, salt marshes are being forced to migrate inland. But when their path of retreat is blocked by built infrastructure like roads, dikes and buildings, many of these wetlands are lost in what is known as “coastal squeeze.”

“Conserving these at-risk habitats and their neighbouring inland retreat is critical to ensuring these important ecosystems continue to thrive. Extensive shoreline hardening has left no room for salt marsh migration, which will lead to further loss,” says Adam Campbell, DUC’s manager of provincial operations in Atlantic Canada.  “We are extremely grateful that the Jean family has entrusted us to care for this important system and to access important funding support from the Government of Canada in order to purchase additional surrounding lands.”

About the Jean Family

Every fall when Maurice Jean was a teenager, he and his parents and siblings would drive 20 minutes to a stunning salt marsh on New Brunswick’s Acadian Peninsula to pick cranberries.

Jean’s parents, Bernard and Corinne, bought the land near Village-des-Poirier more than five decades ago for its beauty, imagining the local Scouts troop camping there, or a theatre group performing in the summer. Whatever the land’s ultimate purpose, Bernard knew one thing: he would protect it and donate it for conservation.

“My father owned other land,” says Maurice, “But this land was for everyone.”

After Maurice’s parents passed away, he and his siblings inherited the more than 75 acres (30 hectares) of salt marsh and coastal upland. Remembering their parents’ love for the place, and their father’s ultimate wish to ensure the land would be protected for generations to enjoy, they decided to donate the marsh to DUC.

About the Natural Heritage Conservation Program

The Government of Canada’s Natural Heritage Conservation Program (NHCP) is a unique public-private partnership to support new protected and conserved areas by securing private lands and private interests in lands. The program is managed by the Nature Conservancy of Canada (NCC). Federal funds invested in the program come from the Canada Nature Fund and are matched with contributions raised by NCC and its partners, Ducks Unlimited Canada and the country’s land trust community.

“The twin crises of climate change and biodiversity loss are two sides of the same coin, and we must tackle them together,” says the Honourable Steven Guilbeault, Minister of Environment and Climate Change. “By working with partners like Ducks Unlimited Canada and the Jean family, we are helping to protect the natural environment in New Brunswick and across the country. Through programs like the Natural Heritage Conservation Program, our government is helping progress toward our goal of conserving a quarter of lands and oceans in Canada by 2025.”

DUC and our conservation partners are continuing to conserve and restore salt marshes with undeveloped supporting lands across Atlantic Canada and save them from coastal squeeze.