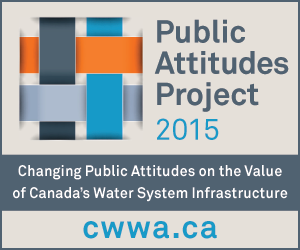 The Canadian Water and Wastewater Association (CWWA), with the help of Water Canada and the Actual Media team, has completed a new report titled Public Attitudes 2015 to be released on June 3. The report will act as a guidebook for communities developing communications plans around their water and wastewater services and will help bridge the gap between public opinion and the reality of our water infrastructure challenges.

At the 2014 Canadian Water Summit in Toronto, Actual Media Inc.—publisher of Water Canada—brought together a roundtable of formidable Canadian water thinkers to brainstorm and discuss public messaging around water. While the formal decision of how public funds are spent rests at the political level, those decisions must be supported, or at least understood, by the general public. The Public Attitudes 2015 report highlights messages and communications approaches that will bring water and wastewater infrastructure to the front of the public’s mind.

Public Attitudes 2015 joins other recent publications tackling water infrastructure issues in Canada. The British Columbia Water and Waste Association (BCWWA) released its report—Are Our Water Systems at Risk?—in February 2015; RBC released its eighth annual RBC Canadian Water Attitudes Study in March; and the Federation of Canadian Municipalities (FCM) is expected to release its second Infrastructure Report Card this fall. Together with Public Attitudes 2015, these reports will give us a complete overview of Canada’s municipal infrastructure situation and will help guide municipalities looking to build support for solutions to their local challenges.

Water Canada is proud to have played an integral role in the development of this report. We are confident that the CWWA Public Attitudes 2015 report will help municipalities improve public support for water and wastewater infrastructure projects, and provide an important stepping stone to the overall improvement in the state of public infrastructure in Canada.