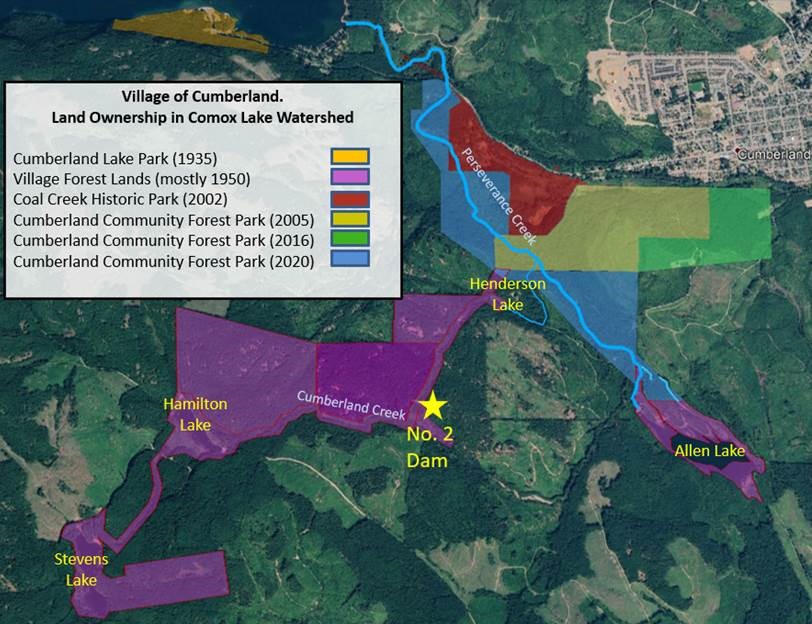 The Village of Cumberland has been successful in two major grant applications for infrastructure funding:

The dam reconstruction works are required under Provincial Dam Safety Regulations for the purpose of seismic upgrades; additionally, the project will consider opportunities for changes in flow regime in the Cumberland Creek system (a sub-watershed of Perseverance Creek) in consideration of other creek health and fisheries values, including restoration works in an adjacent creek subject to an existing diversion. This will help mitigate erosion in the Perseverance Creek tributary that has contributed to the turbidity events in Comox Lake that have impacted the Comox Valley regional drinking water system.

“We are excited to embark on this project to not only improve dam safety and manage this important drinking water supply asset, but also to enhance other important values in the Perseverance Watershed,” says Mayor Leslie Baird. “We have been looking to move forward on this project for several years now.”

While concept plans have previously been developed for the project, further work remains to finalize design details. The Village looks forward to working with the K’ómoks First Nation in this process. Additionally, the Village will be engaging watershed stakeholders including the Comox Valley Regional District, neighbouring landowners, and conservations organizations.

The Village of Cumberland operates its own drinking water system, including from surface water sources in the Perseverance Creek basin, a sub watershed of Comox Lake. The original No. 2 dam was constructed in the late 1800s and forms part of the Cumberland Creek side of the system, which also includes dams at Henderson Lake, Hamilton Lake and Stevens Lake. The Village’s waterworks system is independent of the Comox Valley Regional District’s drinking water service that draws water from Comox Lake.

View the Government of Canada Backgrounder and the BC Government news release.

The Union Road watermain project will bring water servicing to the undeveloped lands along Union Road in the Village of Cumberland. The project includes the construction and installation of approximately one kilometre of water main infrastructure along Union Road between Cumberland Road and Royston Road.

“The Village is grateful for the funding from the Province of British Columbia in support of this important water infrastructure expansion project, say Mayor Leslie Baird. We look forward to future engagement with residents on land-use planning for village-owned lands in the vicinity, as well as on the development of a village-operations facility on Union Road.”