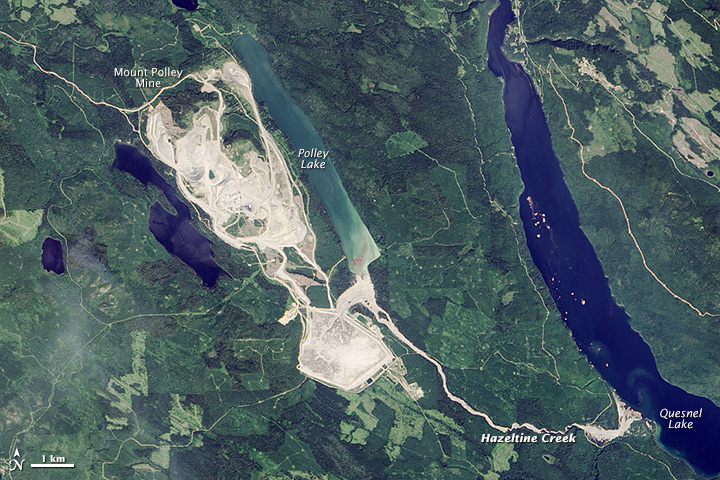 In the aftermath of the August 4, 2014, Mount Polley mine disaster, the communities of Mount Polley and Likely, B.C., approved the diversion of the mine’s effluent into Quesnel Lake.

In mid-October, in keeping with legislation, Mount Polley Mine and its parent company, Imperial Metals, released a proposed water management plan to address effluent drainage on a longterm basis. Area residents were discouraged to find that the mine proposed a continued outflow of effluent to Quesnel Lake.

According to Doug Watt, director at the Likely Chamber of Commerce, the approval for the mine’s effluent to drain into Quesnel Lake wasn’t meant to be a permanent arrangement. Watt said it would be much better to drain the effluent to Quesnel River as the lake’s western arm has a 90-day retention time and residents are worried about exacerbating any damage already done to the lake as a result of the spill.

Moreover, a comprehensive assessment on the impacts of the spill has yet to be conducted. The spill, released upwards of 30 million cubic metres of wastewater into the environment, and since then, Mount Polley Mine and Imperial Metals have been working to restore Hazeltine Creek, the primary channel between Polley Lake and Quesnel Lake. The disaster caused the two-metre-wide creek to become a 50-metre-wide “wasteland” according to an August 5th article in The Williams Lake Tribune.

While rehabilitation efforts at Hazeltine are progressing, Watt and Likely residents are concerned that the impact of the spill on Quesnel has been insufficiently addressed by both the mine and B.C.’s Ministry of Environment (MoE). Citing changes in staff organization at MoE, Watt said that the Ministry has been unable to sufficiently devote the scientific resources needed to understand the impacts of the spill.

Since the spill, residents have noticed both quality and clarity problems in Quesnel Lake. In an interview with the CBC, Watt noted that where residents on the lake previously changed water filters once per year, they are now having to replace filters every two-to-three weeks.

For its part, Mount Polley Mine has ensured that the effluent entering Quesnel Lake meets ministry standards and has been active in communicating with residents, presenting to residents of both Mount Polley and Likely in late October and early November. The company also hosted a telephone information session on November 15th. Which, according to Watt, gave residents “the opportunity to ask technical questions.”

Mount Polley Mine’s permit to release effluent into Quesnel Lake expires in November 2017. The water management plan currently under consideration will determine their practices after that date. Residents have until November 26th to comment on the proposed plan.

Water Canada has contacted both B.C.’s MoE and Mount Polley Mine for comment.

Water Canada’s coverage of the disaster and its impacts.