Canadian cities received a C+ grade on flood preparedness in a study conducted by the Intact Centre on Climate Adaptation at the University of Waterloo.

The study shows that many cities have made little progress to limit their risk of flooding over the past five years. In a survey of 16 municipalities, cities scored an average C+ in flood-readiness in 2019/20—the same score a near-identical study found in 2015.

The general lack of readiness means that if a large-scale flooding event were to occur this spring alongside the COVID-19 pandemic, the impact on Canadians could be “catastrophic,” said Blair Feltmate, co-author of the study and head of Waterloo’s Intact Centre. “Many people could find themselves in harm’s way with a basement full of sewer water.”

The municipalities’ scores were calculated based on detailed interviews with 53 municipal officers responsible for managing floods and emergency services across the 16 largest municipalities. Respondents included representatives of municipal governments such as city managers, directors, and senior planners. Some representatives of public utilities and conservation authorities who had relevant expertise were also included.

The study found that:

Municipal officers repeatedly warned that cities must do a better job of preparing for floods or risk another spring of sandbagging, generally at the last minute. 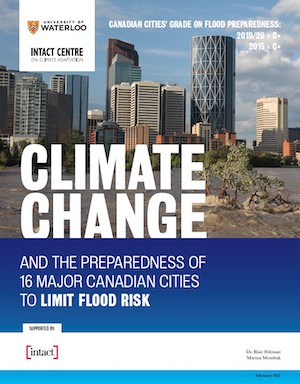 There is some positive news: Edmonton, Regina, and Toronto improved their flood-preparedness scores. They each achieved a B+, primarily for protecting health-care facilities such as hospitals, clinics, and retirement homes. These cities also put in place measures to maintain continuity of electricity, telecommunications, and water and wastewater services during floods. Edmonton also provides free flood-risk assessments for homeowners through its municipally owned utility, EPCOR. It is the only city to do so.

“Flood-readiness is key to societal resilience,” said Veronica Scotti, chairperson of public sector solutions at Swiss Re. Scotti is also a member of the Intact Centre Advisory Council. “By learning from one another, these cities could make much-needed progress on climate resilience. This would include maintaining a city-level risk management framework and outcome-oriented adaptation plans.”

In 2020, insurable losses in Canada reached $2.5 billion. This made 2020 the fourth-worst year for insurable claims since record keeping began in 1983. Climate change, aging municipal infrastructure and residential housing, and the accelerated loss of protective natural infrastructure like wetlands contributed to flooding. These factors also contributed to the rising costs to governments, businesses, and homeowners.

Get Smart on Stormwater to Save Billions