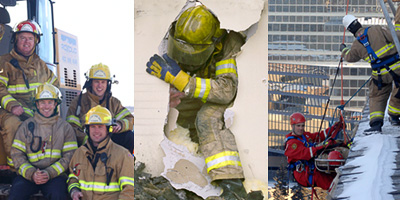 The City of Calgary was awarded the National Municipal Environment Award from the Canadian Association of Municipal Administrators for its water reuse project. City manager Owen Tobert received the award on behalf of the Calgary Fire Department and City of Calgary Parks.

The Calgary Fire Department’s water reuse project has also been named a finalist for other awards including, the Globe Awards for Excellence in Urban Sustainability and the Emerald Awards, to be distributed on June 15 in Edmonton.

Recognizing an opportunity to reduce its environmental footprint and to participate in the City’s 30-in-30 Water Efficiency Plan (to reduce Calgary’s per capita water consumption by 30 percent from 2003 volumes by the year 2033), a system was constructed to capture and reuse the large quantity of water expended by the Calgary Fire Department’s Training Academy in practice fire exercises.

“We are very pleased that we have been able to implement such an environmentally responsible and sustainable program into our operations,” said acting fire chief Ken Uzeloc. “The fact that it is now attracting recognition from our counterparts across Canada is a real honour.” The Calgary Fire Department’s training operations use up to 150 million litres of water per year. In essence, the training academy will virtually cease consumption and waste of potable water for training exercises.

The City of Calgary’s Parks Department assisted in the design of the treated wetland and associated infrastructure and will operate the water treatment system, as well as oversee the irrigation and maintenance of the grounds. The systems works through a series of ponds that capture, treat and put water used in training exercises back into an internal hydrant system. There are three reservoirs that water must pass through before it can be put back into the system and reused again.

Using gravity, the first pond collects spent water from training courses on the tarmac area. The water is then pumped into a second shallow treatment wetland. Third, the water goes into the clean water reservoir. This is covered to keep the water clean and to keep fowl off the water. From here, this non-potable water then goes into a pump system to supply the hydrants at up to 40,000 litres per minute.

A final system upgrade includes the installation of a training manifold system, which allows the fire department to train pump operations without one drop of water hitting the ground. Since it’s a closed-circuit system, no water is lost through evaporation. Training can take place year-round without putting ice on the tarmac or wasting water.

The Calgary Fire Department’s project, which began construction in June 2009 and opened July 2010, is the first of-its-kind in Canada.

Beer Made from Reused Water Produced in Alberta