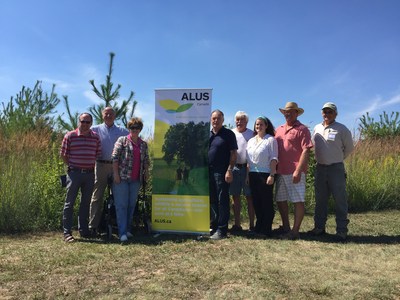 Today, the ALUS program announced its Ontario relaunch as ALUS Canada, an independent not-for-profit organization supported by The W. Garfield Weston Foundation. Gilvesy unveiled the organization’s new branding and new website. “ALUS is rapidly expanding,” said Gilvesy. “There are now 20 ALUS communities in six provinces. And with our Quebec launch on August 10, ALUS is becoming bilingual and truly national.”

In Ontario, ALUS has grown from the province’s original community in Norfolk Country to a total of five programs: ALUS Elgin, ALUS Grey-Bruce, ALUS Ontario East, and ALUS Lambton. More than 200 Ontario farmers and ranchers now participate, including the event’s hosts, Tracey and Shelley Boerkamp, who have established several ALUS projects at Springview Farm, a corn and soy cash crop operation with a golf course on part of the property.

“It’s been wonderful to see the transformation of our property over the years,” said Boerkamp. “We went from a traditional tobacco farm to a more naturalized site where our grandchildren can enjoy all the natural benefits like butterflies, birds and other wildlife.”