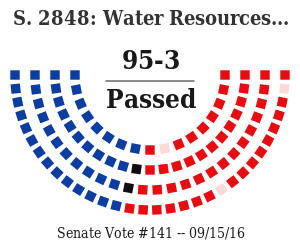 The U.S. Senate has passed a bill that includes several provisions that would support Great Lakes protection, including the establishment of a Great Lakes Algal Bloom Coordinator to address the issue of harmful algal blooms.

Passed by a 95-3 vote, the bill reauthorizes the Water Resources Development Act (WRDA) for two years.

“The Great Lakes are the bedrock of our economy, support a thriving ecosystem, serve as a source of drinking water for more than 48 million people and directly generate more than 1.5 million jobs and $60 billion in wages annually. We urge the House to pass similar Great Lakes provisions in its version of the legislation swiftly, so that the House and Senate versions can be reconciled and signed into law.”

Other provisions in the Bill include:

The bill must also be passed by the House of Representatives and White House before it becomes law.