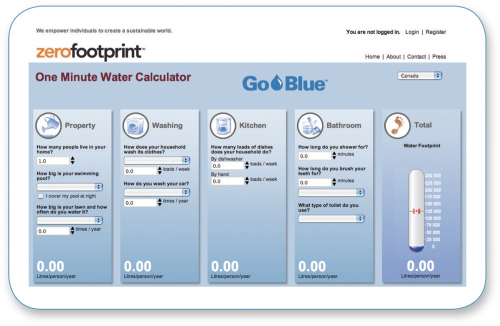 According to one of the world’s largest consumer products companies, Canadians are huge water wasters, second only to Americans, and most of us don’t even realize it.

On April 16, Unilever Canada launched GO BLUE, a campaign designed to encourage Canadians to do a better job conserving water.

“Water, for us, has always been seen as a really critical component of our business,” said John Coyne, vice president of legal and coprorate affairs for Unilver Canada. “If you think about the consumer products in our business — tea, laundry detergent, soap, soup, ice cream, margarine spreads — you’ve got all kinds of products that either directly or indirectly use water.”

Supported by groups such as Waterlution, Water Matters, Polis and the Canadian Partnership of the UN Water for Life Decade, GO BLUE encourages Canadians to cut their home and garden water use in half. Coyne said the campaign includes national TV, print and in-store communication, as well as a website — goblue.org — that offers water-saving tips and an interactive “One Minute Water Calculator” which shows individual users approximately how many litres of water they use per year. By adjusting the data entered into the calculator, consumers can see how how big a difference they can make, just by making some simple changes (for instance, by cutting shower time down from 10 minutes to five can save over 17,000 liters per year).

See also  A Designers Experience with Designing Large Systems for the U.S. and Canada

“If we can surprise people and get them thinking about this, I think we can make some really interesting strides,” Coyne said.

He added that what he found surprising were the results of a survey commissioned by Unilever, the Canadian Partnership Initiative of the UN Water for Life Decade and RBC (which started its 10-year, $50 million Blue Water Project grant program last year). The IPSOS-Reid poll revealed that only six per cent of Canadians consider themselves to be a threat to Canada’s long-term supply of fresh water.

“To find out that over 80 per cent of the people in this country don’t think we have any kind of water problem, I find that to be startling,” Coyne said. “I want everybody who’s out there buying and consuming consumer products to be aware of this, I want everybody who’s tapping into this issue on the Internet to be aware of this — but more than that, I want people to find out how it is they can make individual choices, because part of this is persuading large numbers of people to act on an individual basis.”

Stacie Smith, who runs a Toronto-based eco-social marketing company called Greensmiths, said she supports Unilever’s campaign because it allows Canadians to analyze and track their own individual water behaviour.

“I think if more people spent more time actually analyzing how much water they use, they’d be shocked and more apt to change their behaviour,” she said, noting that individuals can make a big difference by just shortening time in the shower, not having baths on a regular basis and not leaving the tap running while brsushing teeth. “From a mass consumer perspective I’m pretty happy with the tips they came up with because it’s do-able.”

Smith added that Canadians need to stop using drinkable water for “ridiculous uses” such as watering lawns and power-washing driveways.

“I think we forget that there are developing nations all over he world where (people) actually have to walk kilometres to get water and then treat it or boil it to make it drinkable — and here we are literally putting it down our sewers,” she said. “I think there is so much water in Canada that we take it for granted.”

Level 3 Drought in Okanagan Region and Across B.C.