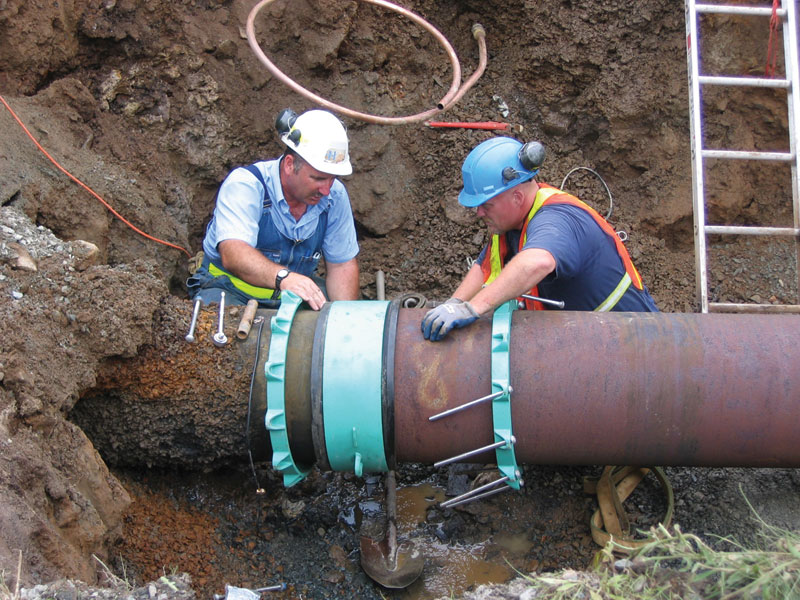 “Water loss is a reality, and it’s going to get worse,” says Shaun McKaigue, vice president at FER-PAL Construction Ltd.

McKaigue is talking about leaky pipes, an issue that’s costing $700 million a year in Ontario alone. A 2009 Residential and Civil Construction Alliance of Ontario study said leaky pipes cost the province 25 per cent of its drinking water—enough to fill 131,000 Olympic-sized swimming pools.

“People have to start investing now,” says McKaigue. “Our infrastructure is quickly approaching the point of complete failure—when we get to that point, all of the king’s horses and all of the king’s men couldn’t do the work to repair it.”

Yet the average Canadian city isn’t doing much to fix water loss, says Marc Bracken, VP and general manager of Echologics Engineering Inc., an Ontario-based company that develops acoustic technologies for non-invasive underground leak detection. “If water is coming up onto the street, they fix it,” he says. “It’s mainly reactive.”

In “Know Your Network,” [March/April 2012]   authors Gohier, Adams, and Papa say that municipalities tend to track the number of watermain breaks as a sign of service level, and also as a way of protecting the deteriorating state of the infrastructure. They argue that this concept can be misleading, and it can be—especially if it causes managers to ignore what the data is saying.

Carl Yates, general manager of Halifax Water, says it’s always worth looking for leaks to repair. “While it’s very dramatic when you have a large failure, it’s the small leaks that will skin you alive.” Leaks, he says, can run undetected for a long time. “You’d be amazed by how much water you’d save by fixing them—or how much can be lost by ignoring them.”

Yates speaks from experience. In the late 1990s, Dartmouth opened a brand new water treatment plant, and that made the city’s water more expensive to produce. “We didn’t want to be wasting it,” Yates reasons, “so we went looking for the best-in-class for water loss control.”

That journey turned Halifax Water into a North American leader in water loss prevention. The utility recaptured in the range of 38 million litres of water per day, saving $600,000 to $650,000 per year. In 2005, it won an award for water loss and control from the Federation of Canadian Municipalities. Reducing leak run times, Yates says, is the utility’s rally cry.

To begin, Halifax Water adopted the International Water Association (IWA) water balance methodology (see Figure 1) that helps utilities to apply their documentation to see where they stand in terms of water loss. From there, they can make adjustments to improve.

“Trying to quantify your loss before getting a system assessment is very important,” says Colin Powell, principal at Alliston, Ontario-based Watermark Solutions, a company that specializes in pipe inspection and leak locating services and technologies. “Especially for systems that rely on a limited or expensive source for their water supply, conducting a water loss assessment and the resulting water savings can help offset the need to build additional capacity for growth.”

Since 1999, Halifax Water has used roughly $1.5 million in capital expenditures such as new software and metering equipment. The utility modified some of its existing chambers, and employed its supervisory control and data acquisition (SCADA) system in a big way. It also applied the district metered area system, breaking up its distribution area into roughly 65 manageable zones. Master meters monitor everything that goes into those zones, while other meters tell the utility what leaves the zones. “When our water audit comes into play, we have a good idea of what’s being used. With hydraulic attributes coming in real time, we’re able to do trends and analysis to find our lowest flows,” says Yates.

Yates says the team is particularly interested in what’s happening between two and three in the morning when people aren’t using much water. “When flow creeps up during the night, we have indication of a leak. That’s when we send a leak protection crew on a hunt-and-destroy mission. We can generally fix that leak within two days.”

Does leak repair save money?

The concept of finding the economic level of leakage requires caution, Bracken says. If a leak is losing a small amount of water, it will cost more to repair—he estimates a minimum of $1,500 to $5,000. “That being said, even the smallest of leaks could turn into a bigger leak or cause more damage to infrastructure. Keep in mind that the average leak runs for six to eight months before it surfaces.”

Bracken isn’t the only person who feels conflicted about the concept of an economical level of leakage—in fact, it’s a source of great debate. Powell adds that “background” leaks, such as weeping at joints where pipes come together, are uneconomical to repair. “Personally, I want to find everything. But if the price point is low enough, [utility owners] are not going to be too concerned.”

The sentiment is echoed in academia. In a 2010 paper on the topic, environmental engineer Alan Wyatt argues that if water production is relatively inexpensive and consumers are not metered (and, therefore, revenue isn’t tied to consumption), there are fewer financial incentives to reduce the occurrence of leaks. “Water is cheap in Canada; there’s no motivation to fix the entire system,” says FER-PAL’s McKaigue. “A lot of asset managers decide it’s cheaper to run a system with water loss than to replace a pipe.”

In contrast, Wyatt says, reducing leaks makes some sense from an economic perspective, since households typically derive a higher benefit from water than what they pay for it. However, reducing leaks to the lowest possible level is only appropriate if the cost doesn’t exceed the benefits. That depends, of course, on what counts as a benefit.

Why run such a tight ship?

For Halifax Water, the economic benefits provide the initial argument for water loss control—if you’re not leaking, you’re not pumping as much, which means less money wasted on treated water, as well as a lower carbon footprint.

But there are other benefits, including improved customer service. Yates says that being proactive helps. When his team locates a leak, it informs customers right away, giving them advance notice about repair dates. “They appreciate having an opportunity to prepare,” he says.

Additionally, addressing those small leaks before they become disastrous sinkholes means less disruption of public and private property. “When the street erupts, you’re disrupting traffic, residences, and businesses. Customers are quite vexed when they have to shut down operations. This way, we’re preventing that from happening and minimizing physical disruption.”

Another benefit is fewer liabilities. Yates says documentation and action means that the utility has more solid footing during water damage claims due to leaks. On a related note, having fewer leaks means better public health protection. “If you have a system that leaks like a sieve, you’re more prone to contamination,”  he says.

The Halifax Water system, Yates confirms, is in good shape now—and the utility is taking its control up a notch. “There are more breaks in the nighttime than during the day because pressure can creep with without system use,” he says. “We’re doing a lot of research in pressure management and starting to control pressures at night.”

Given the increasingly scarce financial resources at the municipal level, it’s hard to convince every city to invest in leak prevention. Yates’ reasoning? “There’s no reason to be wasting such a precious resource. It’s shameful.”  WC

Kerry Freek is the editor of this magazine.

New Members Appointed to Waterfront Toronto Board of Directors