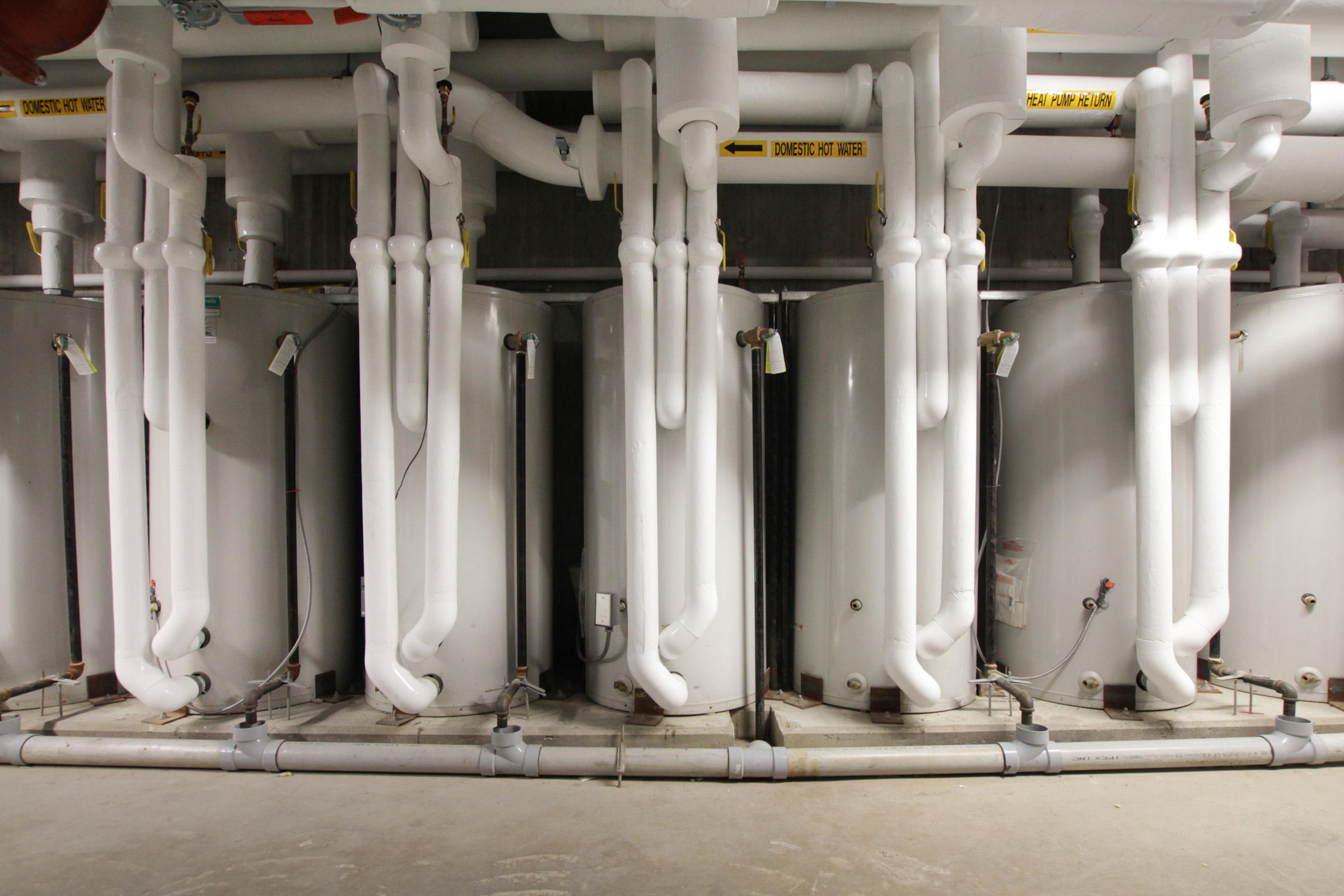 It has been estimated by the U.S. Department of Energy that Americans flush 350 billion kilowatt-hours of energy into sewers each year. This wasted energy would be enough to supply 30 million homes. In fact, the typical North American pours 75 litres of hot water down the drain every day.

For a regular household, this can cost homeowners hundreds of dollars per year since water heating is the second highest source of energy demand in a home. But unbeknownst to some, it is now possible to capture 95 per cent of this wasted heat and recycle it back into our buildings using sewage heat recovery, which means the heat energy flowing down our drains never has to leave the building. Unlike solar or wind power, this technology doesn’t require a quantum shift in the way we live or the way we think—it can simply be plugged into our existing infrastructure.

Water enters our buildings at 7°C to 9°C and leaves at 20°C to 25°C. Sewage heat recovery captures the heat in water leaving the building and uses it to reheat our hot-water tanks and the building itself. This technology is not complicated. First, a filter is used to separate out solids, which make up about two to three per cent of sewage. Then, with the help of a heat exchanger, the heat is transferred into clean water, and this warm, clean water is sent back into the building. At the end of the cycle, the clear sewer water picks up the solids extracted at the start and flushes it back into the municipal sewer system.

In the summer, buildings with sewage heat recovery systems can reverse their heat pumps and use the wastewater to reduce a building’s air-conditioning costs. In this scenario, the pumps extract heat from the building and transfer it through the exchanger into the sewer water.

The potential reusable heat in wastewater has largely been ignored because sewage has “dirty” and negative associations. But today’s sewage heat recovery systems are hermetically sealed, meaning there is no associated smell. They are also designed to be clog-proof with an automatic back flush to filter sewage simply and effectively. Moreover, a monitoring system will flag any potential problems long before they become an issue.

Sewage heat recovery is gaining in popularity with operations underway in Norway, Japan, and China’s Beijing South Railway Station. North American cities are now waking up to the fact that there is a valuable energy resource currently flowing under the city streets. Vancouver, Seattle, and Philadelphia have all started experimenting with sewage heat recovery systems.

In Vancouver, International Wastewater Systems has already installed sewage heat recovery systems, called SHARCS, into several public and private buildings, including the Gateway Theater in Richmond. The Gateway installation will be the first application in Canada that will use raw wastewater directly from the municipal sewer rather than the wastewater coming out of the building.

The option of using sewage heat recovery on a district-wide scale is also being explored worldwide. District energy systems are large-scale, multi-building heating projects that can supply energy over a large area using either recovered energy from other buildings, industrial sources, waste, or by burning carbon-neutral fuels. Sewage heat recovery could easily plug in to district energy infrastructure.

While sewage may not be as exciting as fuel cells or tidal energy, the fact that it has a payback period of two to five years makes it perhaps the most cost-effective renewable energy system currently available. Sewage heat recovery systems also work at 500 to 600 per cent efficiency, meaning that for every dollar spent on operational costs, $5 of heat is recovered. Moreover, current systems are demonstrating consistent energy saving performance of 76 per cent. WC