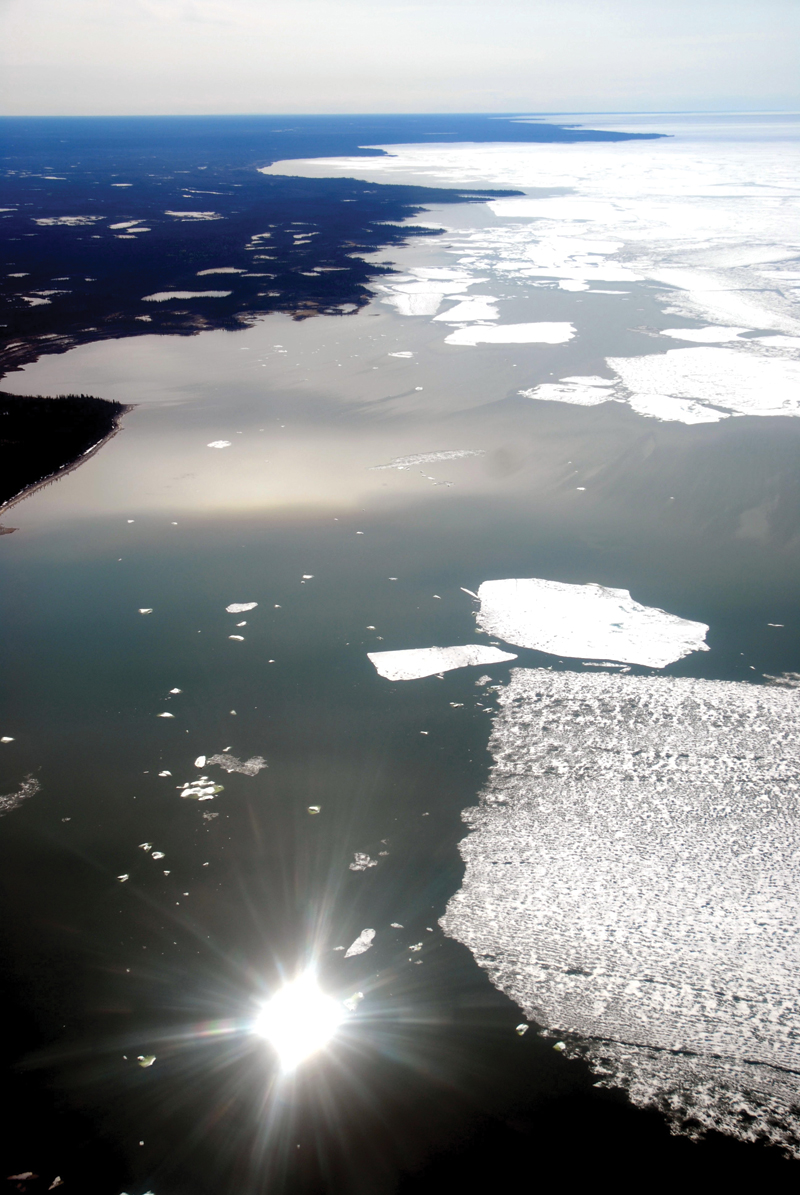 Named Deh Cho, or “big river,” by the Dene people, the Mackenzie River is one of the world’s few remaining large, free-flowing rivers, and one of remarkable continental and global importance. At 1.8 million square kilometres, the Mackenzie River Basin (MRB) drains 20 per cent of Canada’s land mass, and collects and delivers over 9,000 cubic metres of water to the Beaufort Sea each second. The river provides 11 per cent of freshwater flow into the Arctic Ocean, playing a significant role in regulating ocean circulation and Arctic climate systems. The waters and ecosystems of the Mackenzie Basin are also of critical importance locally—they are a foundation of local livelihood and culture.

The Mackenzie system gathers waters from British Columbia, Alberta, Saskatchewan, Yukon, and the Northwest Territories (NWT), which means that the natural boundaries that define the Mackenzie River Basin intersect many political borders and jurisdictional boundaries. Tensions are now arising at the intersections of these borders and boundaries.

While the Mackenzie basin certainly lacks the large urban centres that most Canadians call home, it is no stranger to development. The landscape of a significant part of the NWT has been dramatically altered by oil and gas development and by the growing presence of metal and diamond mines.

In addition, it appears there is a new blue gold rush mounting in the upper reaches of the Mackenzie basin. British Columbia Premier Gordon Campbell’s announcement that Site C—the on-again, off-again dam project on the Peace River—is on again. The plan is to have the 900-megawatt, $6.6-billion project located near Fort St. John operational in a decade. Causing less of a buzz, but of equal concern, is Alberta’s proposed Slave River Hydro project near Fort Smith. Largely absent from discussion is what the cumulative downstream impacts of these two projects will be, particularly when piled onto growing water demands on the Athabasca River due to oil sands development. We must consider and understand what these two new proposed major hydropower projects—in combination with impacts of oil sands development—will mean to the future of the larger Mackenzie River system.

These new hydropower projects are being pitched under a range of rubrics: as green energy; as the solution to climate change; as economic development and job creation. If and how these projects measure up against these claims is a question for another day. What is indisputable is that these projects are moving forward in the absence of comprehensive long-term planning and with a narrow perspective on the sites themselves, without commensurate consideration of the impacts these projects may have on the integrity of the larger basin as a whole and on the people who live within that basin.

The most significant threats to the fresh water resources and ecosystems of the Mackenzie Basin—hydropower development and oil sands operations—are located on, or planned for, the upstream reaches of the river the system. They begin on what Canadian novelist Hugh MacLennan referred to as the “two great tails” of the Mackenzie, the Peace and Athabasca rivers, and they carry on downstream, beyond where these tails meet in the Peace-Athabasca Delta, in the Slave River. While the projects sites are upstream in Alberta and British Columbia, the impacts may very well find their way downstream to the Northwest Territories, which poses some potentially messy politics.

Recognizing the need to address transboundary water issues, the governments of Canada, British Columbia, Alberta, Saskatchewan, Yukon, and NWT developed the Mackenzie River Basin Transboundary Master Agreement, which came into effect in 1997. It commits its signatories to a set of principles under which neighbouring jurisdictions are to negotiate bilateral agreements to manage shared waters.

Unfortunately, to date only one bilateral agreement is in place, between the Yukon and the NWT.

Protecting the Mackenzie will depend on strong bilateral agreements between neighbouring provinces and territories. Legal analysts point to the need for stronger federal participation to ensure that such agreements are reached. Without federal leadership, upstream jurisdictions are likely to delay negotiations, or agree to only modest commitments, so as not to constrain their own future uses of the shared waters of the Mackenzie watershed.

Such developments as Site C and the Slave River Hydro project are particularly problematic. If British Columbia and Alberta have the infrastructure they want approved before bilateral transboundary negotiations begin, the likelihood of a fair and equitable agreement that respects the ecosystem and the people that depend on it downstream in the NWT will be greatly diminished. Indeed, the Territories may very well bear the costs while those upstream reap the benefits—this despite the great strides taken by the governments of the NWT and Canada to set in motion the protection of the territory’s waters with the new Northern Voices, Northern Waters strategy.

The Mackenzie River system is one of a few big river systems remaining where we have the opportunity to plan for the conservation and sustainable management of fresh water in advance of development. It is one of the few remaining places in the country where it is still possible to create a water management framework that protects fresh water and the many benefits it provides—before deciding what developments move forward and how. It would be irresponsible to move forward with initiatives like Site C and the Slave River Hydro project without a solid understanding of the cumulative impacts of these and other developments on the entire Mackenzie River system, and without a fair, equitable and functional transboundary water agreement in place.

In the Mackenzie Basin, Canada has the opportunity to get it right—to plan ahead in order to avoid bitter tensions over the need for expensive restoration or compensation. Getting it right will require that federal, provincial, territorial and Aboriginal governments come together at the scale that matters most for water—the watershed. They’ll need to transcend political boundaries and develop a plan that protects these remarkable rivers and respects the established rights of the peoples who depend upon the Mackenzie for their livelihood and cultural identity.  WC

Robert Sandford is the director of the Western Watersheds Climate Research Collaborative.