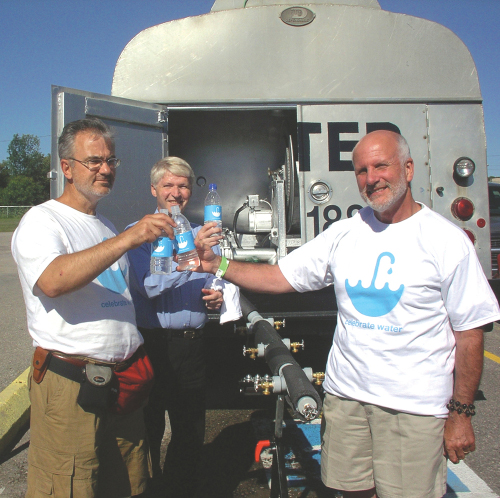 After oxygen, water is our most important molecule — the source of all life on Earth and the key to all great civilizations. But clean water for drinking is in short supply and under threat worldwide because of population growth and pollution. Abundance and scarcity, drought and flood, waste and want; all of these may become increasingly problematic as a result of global climate change. Communities with abundant clean water are extremely fortunate indeed. In the farming communities of the Simcoe Lowlands surrounding Elmvale, Ont. pure spring water emanating from artesian flows is cause for celebration, and a unique opportunity for environmental education.

Water quality can be assured only through expert testing, and the accurate and precise measurement of trace constituents requires not only skill and understanding, but also specialized instruments and equipment. The University of Heidelberg in Germany has long been a leading centre for analytical chemistry: in the 19th century, Robert Bunsen (inventor of the gas burner which bears his name) pioneered trace analysis when he developed the spectroscope, leading him to discover the elements rubidium and cesium. In this science city, at the Institute of Environmental Geochemistry, a “clean” lab was recently built to allow trace metals to be reliably measured in the cleanest waters on earth: ancient ice from the arctic of Canada. By testing ice samples from a 300 m long core from Devon Island, in collaboration with the Geological Survey of Canada, we have reconstructed the record of atmospheric lead (Pb) deposition extending back in time more than 15,000 years. These studies have shown that Pb has gone into decline during the past decades due to the elimination of gasoline lead additives, but during the same period of time the extent of antimony (Sb) contamination of the arctic atmosphere is actually increasing.

See also  Workshop Focuses on “The Value of Water”

The ability to reliably measure metals such as Pb and Sb at extremely low concentrations combined with scientific curiosity led to a series of measurements, over a four year period, of a number of artesian flows centred around the Elmvale area. Much to our surprise, the concentrations of many trace metals in the groundwaters – including cobalt, chromium, and vanadium — are at levels comparable to the cleanest layers of ancient arctic ice. In the case of Pb, the concentrations found in the groundwaters are sometimes even lower than the cleanest layers of ancient arctic ice, and comparable to the lowest levels ever measured on Earth.

At these extremely low levels — parts per trillion and less — there is very little reliable data available for comparison. After testing 132 brands of bottled waters from around the world, it was found that bottled waters in polyethylene terephthalate (PET) plastic were contaminated with antimony (Sb), and bottled waters in glass contaminated with lead (Pb), because of leaching from the containers. Although these metals are generally found in packaged waters at levels well below drinking water guidelines, the findings raise new questions about the relative merits of bottled water versus tap water. In the meantime, the pure spring water of the Elmvale area has provided a new “reference level” against which other waters may be compared.

The extremely low concentrations of metals such as lead begs the question: what makes this water so clean? Some experts initially suggested that perhaps the groundwater is ancient and therefore not yet impacted by industrialization, but further tests showed that the water is not more than 20 years old. In other words, this “pristine” groundwater is in fact, rainwater from the 1980s that has slowly percolated through the glacial debris that makes up the local hills and acts as the source area of these groundwaters. Filtration through the soils — where chemically reactive surfaces provided by organic matter (humus), iron oxides, and clay minerals abound — purifies the water to a remarkable extent. The “multibarrier concept” of groundwater protection, it would seem, was developed by Mother Nature through rock weathering and soil formation, long ago.

See also  What Does Reconciliation Mean for Safe Water Governance?

How many people on Earth have the tremendous fortune of water resources of this quality, literally bubbling out of the ground around them? This precious natural resource is cause for celebration, and the ability of the soils to purify the water an opportunity for environmental education.

The Elmvale Foundation is a federally registered charity created in 2007 for environmental education. The foundation uses water as an educational tool to describe and explain the intricate connections that exist between the atmosphere, biosphere, pedosphere, and hydrosphere.

The Elmvale Water Festival is the annual fund-raising event for the foundation, and the main outreach program for public education. With presentations by leading speakers, exhibits and displays, live musical entertainment and great food, plus a children’s water education centre and games for kids, there is something for everybody. Pure spring water from a local source is available for free all day, and admission includes a non-toxic, dishwasher-safe Enviroclear polypropylene water bottle.

The 2008 Elmvale Water Festival will be held on Saturday, Aug. 16. The event’s keynote presentation will be given by Maude Barlow of the Council of Canadians, who has authored of 16 books about water and is the recipient of six honorary doctorates).