There are a number of emerging challenges and opportunities in the Canadian water industry. Some communities are dealing with water shortages and boil water advisories. At the same time, many organizations, governments, associations and water tech companies are helping pave the way towards a brighter future.

To discuss what needs to happen in order to ensure the prosperity of the Canadian water industry, Water Canada hosted the Building the Blue Economy webinar in February 2021. Sanexen’s Martin Bureau and Matrix Solutions’ Steve Braun joined Actual Media’s Todd Latham for the discussion. Together, they dove into these questions: What types of demonstration platforms are available for municipalities and water technology companies? How do we value water? 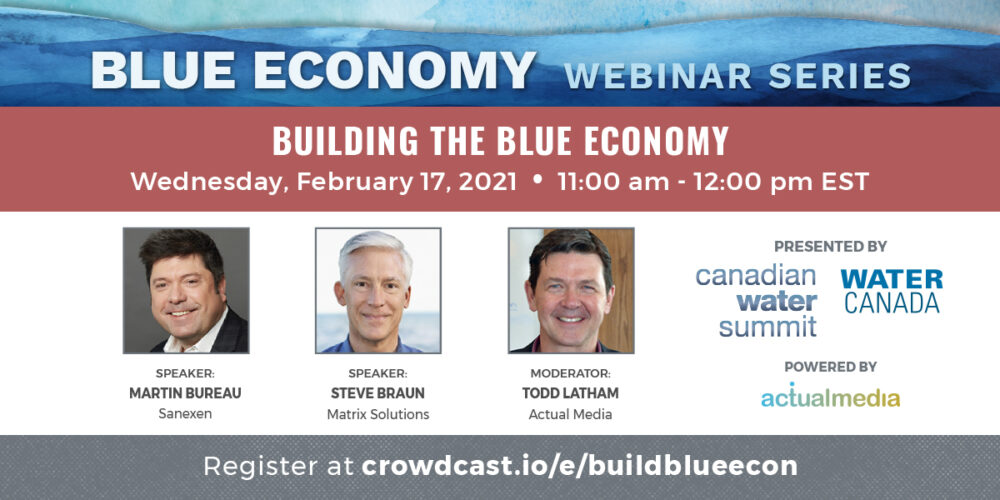 “Is there anything going on in municipalities that allows that to happen?” asked Latham.

According to Braun, “the importance of successfully bringing forward good, new technology is important.” He noted that there is a lot of good work happening. For example, Ontario Water Consortium is an organization that provides demonstration platforms.

Braun also noted programs, like the Scientific Research and Experimental Development Tax Incentive Program, are offered by the federal government. In addition to this, the Federation of Canadian Municipalities offers programs that allow municipalities to apply for a certain percentage of funding for innovative solutions.

Similarly, Bureau noted some programs that are offered by governments and other organizations. He noted Sustainable Development Technology Canada is pushing for showcasing technologies that have been developed in Ontario. The program is starting in Ontario but may be expanded throughout Canada. Bureau also added that the Ministry of Economy and Innovation in Quebec is organizing a forum for addressing tertiary and quaternary water treatment in our systems.

One of the takeaways from this discussion was that demonstration projects could help municipalities overcome risk adversity and bringing them up to speed with what’s available. Traditionally, municipalities have said that “we’ve never done it that way before so why change now mentality,” said Latham. “That’s probably because there’s this risk adversity to adopting new technologies or trying new things. I think having these demonstration projects would be helpful.”

How do we value water?

One of the topics Water Canada’s team has talked about is the value of water. “The perception of most Canadians is that your turn on your tap, you flush your toilet, and you don’t really think about it because we’re probably not paying enough for our water,”  said Latham.

Bureau added that he believes that water is a public good. “It should be given the value that it has but we’re not seeing that right now,” he said. For example, Bureau noted there are no records that indicate how much water is being consumed in each home in Montreal and that there’s a long way  to go there.

“We see where we have public utilities, the awareness of citizens is much higher,” said Bureau. In these cases, Bureau noted utilities are being asked for proof that they are dealing with leaks as an example.

“In Canada, utilities are losing 20-30 per cent of their water to leaks,” said Bureau. “I know in some cities in southern California where five per cent is totally unacceptable. So there is a place for a separate administration and management of water systems. I would certainly love to see that happening.  I believe [water] should remain public but it should be recognized as the key resource it is.”

Braun added the important role that organizations like Living Lakes Canada, among others, play in supporting integrated watershed management. “One of the recommendations we’re making to the Canada Water Agency is that some stable funding or consideration about how they collect their data to make sure that we can support these initiatives and make sure they’re ongoing.”

These types of organizations keep us in check and help us find where the problems are, noted Braun.

“I’ll bring it back to what I do in the flood world a lot,” said Braun. “One of the greatest things we’ve had available to us as flood modellers is citizens out posting to YouTube what happens during a flood. We can model all day long about where we think water might go during a certain rainfall event after certain wet conditions in a watershed. It’s really valuable when we see citizens posting a flood video downtown in a city or out in the country somewhere that shows where the water levels go. This will become more and more valuable to us as citizens.”

Given the challenges Canada is currently facing, and is expected to face in the future, understanding the value of water will be an important foundation for ensuring we can effectively build the Blue Economy.

The original article was featured in the May/June 2021 issue of Water Canada. The full recorded version of the webinar can be found here.

Simran Chattha is the editor of Water Canada.