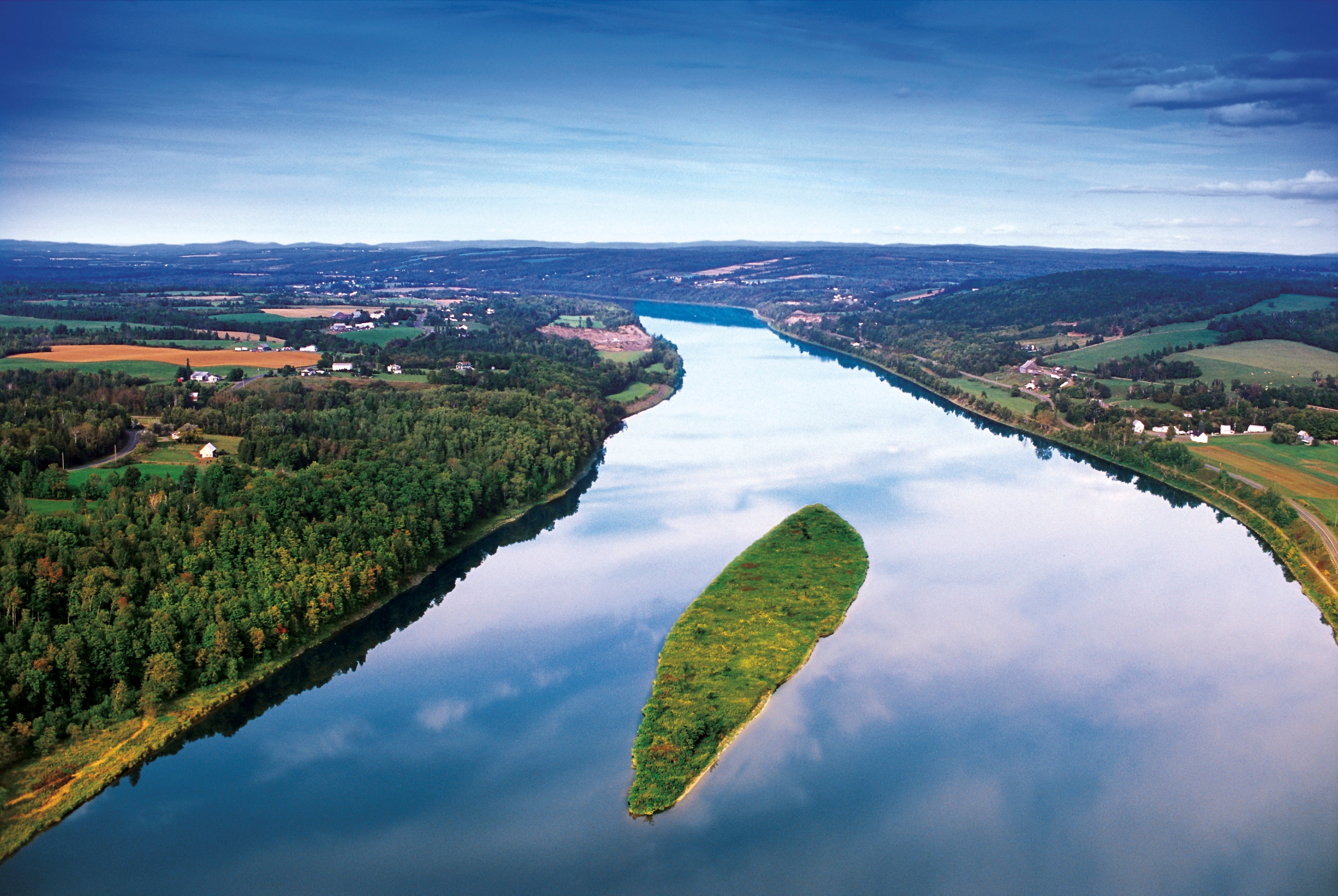 In 1966 author Esther Clark Wright wrote in her seminal work The St. John River and its Tributaries, “a river is something more than a feature of the landscape. Interesting as it may be aesthetically, geographically, geologically, what matters is its relationship to the people who come upon it and who live beside it. Who they are, where they come from, why they come, what use they make of the river, what kind of communities they develop, what they do to the river, what it does to them—these are the considerations that give purpose and vitality to the study of the river.” This resonates with many of us who value the spiritual, cultural, and natural values a river and its watershed provide.

The Wolastoq, which means beautiful river in Wolastoqiyik, winds its way from the state of Maine, collects water from Quebec, and travels through New Brunswick to the famous Bay of Fundy and the world’s highest tides.

The Wolastoq is a priority region for the Government of Canada under the Pan-Canadian approach to transforming Species at Risk conservation in Canada and is a Parks Canada designated Canadian Heritage River. The Wolastoq is under the jurisdiction of the federal, provincial, and municipal governments along with NB Power, which manages most of the hydroelectric dams along its tributaries and mainstem. As an impounded system, the river plays a key role in the production of energy while providing critical ecological, social, and cultural benefits to plants, wildlife, and communities along its banks.

Like many places around the world, there are river stewards working toward the health, management, and betterment of this waterway—Rights Holders, governments, non-profit organizations, academia, and community groups are all working in this watershed. As elsewhere, these agents tend to act independently. This siloed approach is often detrimental to the long-term health of a waterway, whose very nature is interdependence and connectivity.

The Ecological Limits of Hydrologic Alteration (ELOHA) framework is designed for impounded systems. It gathers knowledge to inform management practices for a given waterway, including e-flows data that describe the water quantity, quality, and timing that is necessary to support various organisms and life stages. It also includes social-cultural data that describe flow needs from a human perspective. Often, management frameworks are grounded in either environmental science or social science and use that information to make decisions. This can highlight usage conflict points but does not necessarily lead to sustainable management decisions. An extensive literature review revealed that the social-cultural component of the ELOHA framework has been difficult to complete, and many jurisdictions had small successes. Could we do any better? We had one thing going for us—the Maritimes is small, people are friendly and want to help, and everyone knows everybody. Could we use this to our advantage?

The group of five project partners decided it was worth a shot. We received project funding and moved ahead tapping into the vast experience and expertise in our region by identifying a Project Advisory Committee. With the people and funding in hand, we were ready to start.

The ELOHA framework has two components that feed into it—the environmental piece and the social-cultural piece. The environmental factors associated with the Wolastoq were continuing to be developed by researchers through the Mactaquac Aquatic Ecosystem Study (MAES) and the Canadian Rivers Institute (CRI) at the University of New Brunswick. These researchers first identified the ELOHA framework as being suitable for the Wolastoq.

The task at hand was to determine how we could successfully collect the social-cultural data in English and French, since we are the officially bilingual province, to feed into the framework. The group determined we needed to collect two different sources of information: usage data from Rights Holders and stakeholder groups, and values and perception information from the public using Ecological Goods and Services research as the base.

We started with usage data and worked up a plan. The project used Maptionnaire, a mapping software, to develop usage-based questions that correlated with GIS layers and began working toward a series of meetings along the length of the river. By March 2020, we were ready to schedule our in-person meetings. The cookies and tea were ordered, and then the world shut down. The lesson we learned is that technology is very often a good thing, and meetings were held online with enthusiastic participation, waving of fingers at the map on the screen, and sharing of critical information about how groups and their members use the river in different geographical locations. This information was then overlaid with the environmental data to determine areas of potential conflict between plants, wildlife, and people.

The other piece of information to collect was the public’s values and perceptions of the Wolastoq. In consultation with the Project Advisory Committee, literature and other experts, the group determined that an online survey, advertised through Facebook was the best choice. The data told us this was the social media platform of choice for New Brunswick and Quebec residents. A survey of 10 questions was developed and targeted to river residents in New Brunswick and Quebec. While 200 respondents may not sound like a lot, remember we are a small place.

The project took the social data, aggregated it with the previously collected environmental data, and screened it for potential management impacts. This data aggregation can be used to identify areas of potential improvement between environmental needs and human activities, where a shift of how the resource is managed could result in improvements for all.

At the end of this three-year project, we can tell you a few things. First, our hypothesis about a small place yielding big things proved true. Diversity and interdisciplinary backgrounds of the project management team, partners, and the overseeing Project Advisory Committee allowed for a range of environmental, cultural, and social perspectives. They also played an important role in envisioning a better way to manage the river.

Second, our goals at the beginning of the project seemed simple: collect data, strengthen relationships, and complete the framework. But simple things often become complex: competing uses and values, climate change impacts, water quality and quantity in an impounded system, and its impact on the flow regime all contributed to the challenges.

Third, if we never have another Zoom meeting again, that will be great. We can’t wait to have a cup of tea in person with these caring groups. They are collectively moving toward the common goal of creating a framework for a healthy and resilient watershed using their scientific expertise, sense of place, and desire to make their communities the best they can.

This article was written by Molly Demma and Jamylynn McDonald for the September/October issue of Water Canada. Demma is the executive director of The St. John River Society, a non-profit in Fredericton, New Brunswick. McDonald is a climate change project coordinator at ACAP Saint John. They acknowledge the contributions of all the project partners and funders. The header image credit goes to the Government of New Brunswick.