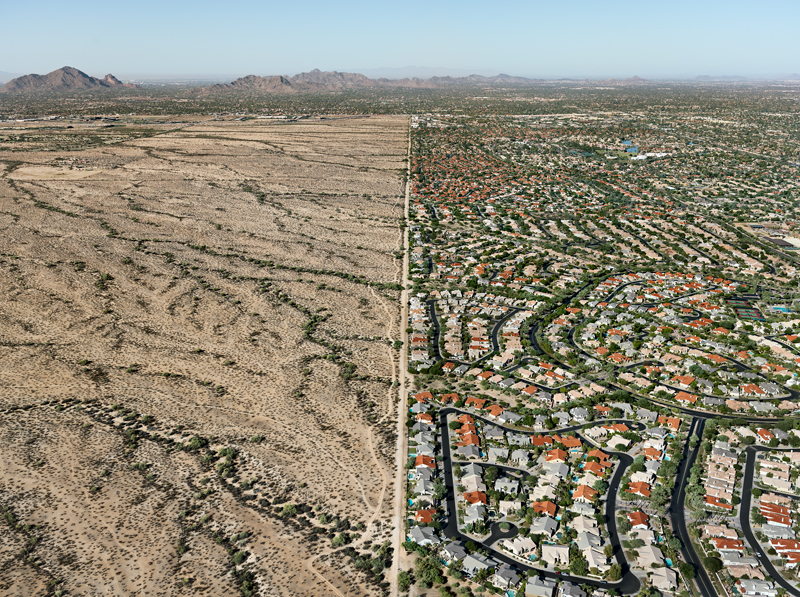 A dry Navajo reservation and a lush Phoenix suburb stretch side by side. The divide between the two patches of land looks so precise, at first the image seems like a trompe l’oeil, a trick of the eye, but it’s only too real: these distinct landscapes are separated by merely a dusty road. As a photographer interested in human systems imposed on landscapes, Edward Burtynsky draws attention to our own compositions, hoping we’ll see what we’ve managed to create.

This September, St. Catharines, Ontario-born Burtynsky’s five-year study of water culminates in three offerings: an exhibition (Water), a film (Watermark), and a book (Burtynsky – Water). As the RBC Water Attitudes Study annually confirms, and as water practitioners are already aware, the public is a tough nut to crack. But by showing us water—and lack thereof—from this perspective, does he expect a shift in the way the public understands and values this natural resource?

The first step is raising awareness. Burtynsky refers to Manufactured Landscapes (2006), director Jennifer Baichwal’s documentary that features his work on the impact of large-scale human activity on landscapes. The film is mainly shot in China.

“Somehow the film keys you into ideas. When you see the ‘Made in China’ sticker on a toy or something you just purchased, it raises your consciousness. You begin to understand what ‘Made in China’ looks like. The meaning becomes deeper than ‘my stuff comes from over there.’”

He, Baichwal, and producer/cinematographer Nicholas de Pencier are trying to do the same thing with Watermark. “No polemics, no finger-pointing. We live in a complex society with a whole lot of competing interests. It’s not a simple right or wrong,” Burtynsky says. “The film doesn’t offer conclusive answers, but it certainly brings forward a lot of the core relationships that we have with water. The measure of its success would be if someone never quite sees water coming out of the tap in the same way.”

As he finished his Oil series, Burtynsky says it was “a natural progression” to turn his focus to water: “It’s ubiquitous, it’s all around us, it touches everything we do. It’s critical to life.”

So what, then, did he want to reveal to people about water? “When I first started the project, I really didn’t have any fixed ideas as to images. There were obvious things that came to mind—we divert water, we build dams, aqueducts, these mammoth projects, like the Three Gorges Dam in China which diverts water on a superhuman scale—but I let my research guide me.”

He recounts working on a project in Australia during the country’s most recent drought. “Farmers had to abandon farms for almost 200 or 300 kilometres. They were dry inside and out; this was indeed a continent experiencing water shortages front and centre. It drove home importance and consequence of what happens when water’s not there.”

Through his research, Burtynsky learned the single largest human use of water is for agriculture, and it became one of the project’s important focuses. Circular pivot irrigation plots, greenhouses, and aquaculture, for instance, are shot from above to convey the enormity of the agricultural and food operations that feed the planet. He reflects on their sustainability:

“In the United States, we’re depleting the Ogallala aquifer to grow corn in the desert, while the rice terraces of China’s Hunan province have been sustainable for over three thousand years—and we still may be getting rice for another two to three thousand years. It’s an interesting way to think about water and the human impact on the landscape.”

During the project, the photographer met and worked with several people who work in water management and was moved by their commitment. “They were happy to help raise consciousness about water, and they understand what can happen if we don’t manage this resource properly,” he says. “While water is forgiving and can rehabilitate, it’s not infinitely resilient.”

So what about inspiring a massive shift in how the public values this critical resource? “My hope is that these pictures will stimulate a process of thinking about something essential to our survival; something we often take for granted—until it’s gone,” reads Burtynsky’s artist’s statement.

Photographer Ansel Adams is often quoted as having said “a photograph is usually looked at—seldom looked into.” We can take Burtynsky’s photographs only so far, but smart communicators will see how his work is a gift, a tool to further the conversation. When the house lights come up in the theatre, or when patrons leave the gallery, hopefully they will be ready to pick up where the artist left off.  WC