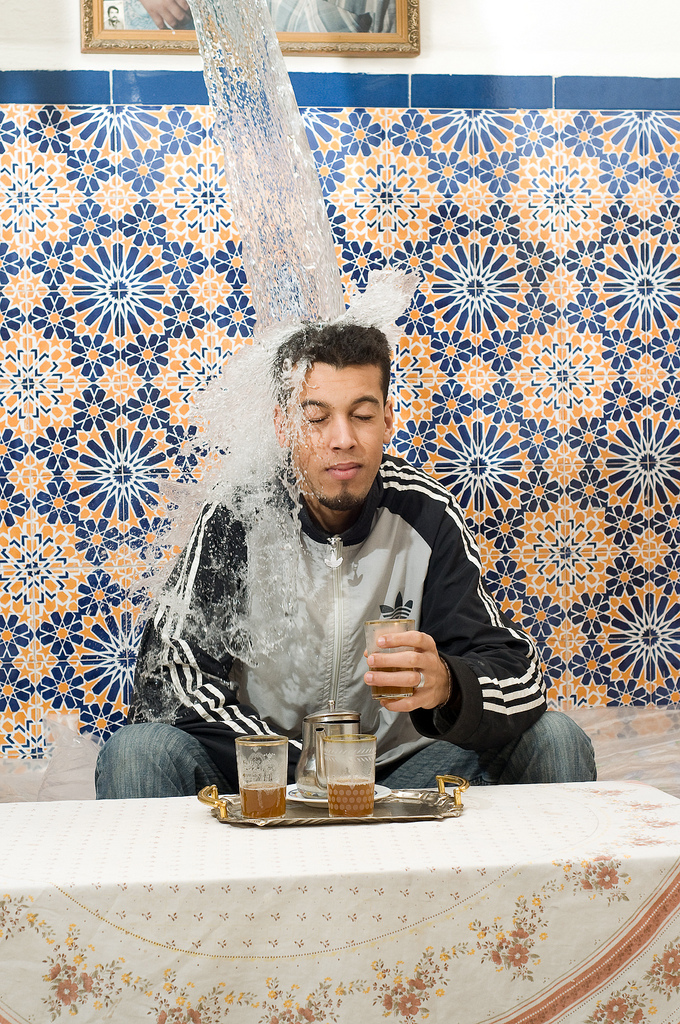 Vancouver-based photographer Peter Holmes was doing his political science undergrad at the University of British Columbia when he concluded that academic research was having very little influence on policy. At the time, he was enrolled in an environmental politics class and a modern art history class. Inspired by art’s ability to communicate in way that academic papers, news articles, and plain statistics can’t, Holmes decided to take a cue from Bertold Brecht: “In one who is astonished, interest is born.”

In order to make statistics relatable and astonishing, Holmes translated his own interest in water consumption rates and devised his Water Portraits series, which depicts people doing everyday activities, interrupted by a surprise soaker consisting of the average hourly amount of water consumed in their geographical location. “I wanted to generate primordial interest and invoke questions in the viewer,” Holmes says.

Water Canada spoke with Holmes in early January to learn more about his series.

Water Canada: How does water interest you?

Peter Holmes: It’s truly is the most important resource. Wars are fought over it, people die for lack of it, it’s required in the manufacture of virtually everything from apples to apple computers. Paradoxically, water may be the resource that we think about the least, but it won’t be that way for long. Now more than ever, it’s important to get it in the public mind to allow politicians to make smart decisions and investments.

You say you want to make water consumption “visible.” How do your portraits achieve that goal?

Most of the water we consume, we don’t see. Dishes come out of the dishwasher clean, like magic. A lot is lost through leaks in the city’s distribution system. These numbers I used are a calculation of the municipal input into city or town divided by the population. This statistic is often divided into a “per person per day” average. In Canada, it’s 327 litres. For most people, this number is invisible—it’s not really meaningful because we can’t envision that amount. By dividing it into hourly use (13.6 litres), the amount becomes less abstract.

How many times did your subjects have to be soaked in order to get these shots? Were they surprised by the timing?

Each portrait was done only once, there were no second takes. I love how their reactions are all different. In the Alberta portrait I forgot to make the water warm, so the subject is getting dumped with ice cold water!

What was the most difficult thing to control?

The way the water fell. The speed and direction was different every time. I also used different buckets every time because I was always in a different location around the world, so it’s hardly a scientifically controlled experiment. There were plenty of variables that make comparison difficult. There’s also very little in common with how the water statistics themselves are generated. There is no international standard of calculation for residential consumption, and the census data for some regions may be significantly different.

Is there a message you’d like to convey through these portraits? Would you like them to influence a certain type of behaviour? What kind of feedback have you received from viewers? What are they most surprised to learn?

Like most art, the message is left up to the viewer to interpret. The statistics are provided as if they were extracted from a news article. We read statistics like these all the time but they rarely soak in. Ideally, viewers would question how it’s possible that Canadians can use 13.6 litres per person per hour. I don’t have any of those answers, but the key thing is to encourage questions and interest.

Are you planning to exhibit the series anywhere in Canada in coming months? Elsewhere?

I had the premiere exhibition here in Vancouver last September. They were also part of a group show in Washington, D.C. in November as part of FotoWeek DC. I’m currently looking for spaces to hold more exhibitions in Canada and around the world. I’m also considering the possibility of making the project more open source, where people can create their own water portraits and upload them, perhaps using a Flickr group and Google Map combination.