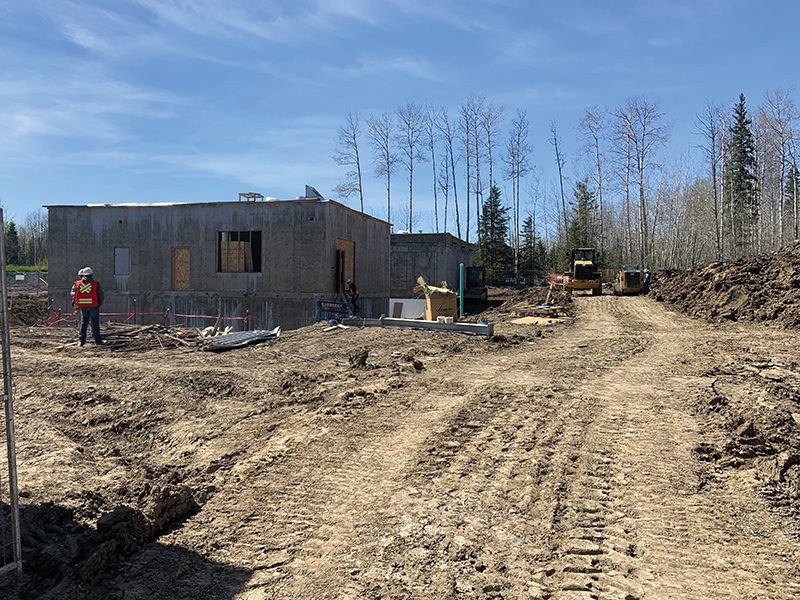 Most of North America takes potable water for granted, but for many of Canada’s First Nation communities, access to clean drinking water is not a given. While many Indigenous communities continue to wait for water service, residents of the Fort McMurray #468 First Nation recently witnessed the construction of a water reservoir and pump station that will deliver clean, reliable, potable water to its nearly 600 residents. The pump station, scheduled for completion in early 2022, is part of a project that will bring life-changing water and sewage service to the area, improving the quality of life for residents and opening up community and economic development opportunities.

The Nation’s leadership had a vision for a new future that included secure, reliable, and safe drinking water and safe sewage servicing. They acted to achieve their goals in 2016, engaging McElhanney, an engineering and land surveying firm based in Western Canada, to take on the challenge of delivering these essential services. At the time, residents received water and sewage servicing via a truck haul system. Although well-intentioned, the system could be unreliable, offered limited development and service opportunities to the community, and due to significant handling requirements, increased health and environmental risks.

Around this time, the Regional Municipality of Wood Buffalo (RMWB) was interested in constructing a regional water and sewage system in the area, which could also provide the Nation service access. After evaluating options, the Nation selected a servicing plan that involved connecting to the RMWB system and constructing an onsite/on-reserve water reservoir and pump station. The relationship between the Nation and the RMWB was strengthened during this process, advancing the spirit of collaboration and mutual support.

According to McElhanney Project Engineer Andy Tenham, the overall project manager, project engineer and project coordinator, “This was a traditional project with extraordinary consequences.” With the completion of this facility, “this community gets drinking water that is safe and reliable for years to come.”

Construction on the pump station began in the summer of 2020 as part of a broader infrastructure plan that will be carried out on both federal (Reserve) and provincial lands. The project comprises a new potable water reservoir and pumping station, water distribution piping, and sewage collection piping, a retrofitted sewage lift station, and a new sewage force main to the RMWB regional infrastructure. When completed, it will provide water and wastewater services that will improve the standard of living for current residents and future generations.

As with many projects with complex funding mechanisms and multiple stakeholders, working out the pre-construction project details took more time than expected, which meant that the general contractor, Chandos Construction (mechanical sub-contractor Goldbar Contractors Inc.), started work on the project slightly behind schedule.

According to Goldbar Project Manager Chris McInroy, working with Victaulic helped make up for lost time. The Victaulic Virtual Design and Construction (VDC) team expanded on the 3D design models produced by McElhanney and generated detailed 3D models that were shared with Goldbar via video conferencing to virtually work through the project design. Together, the team was able to identify assembly issues and resolve them before construction began.

“Victaulic was really focused on minimizing waste,” McInroy said. “When we were in the design phase, there was overhead piping running above some large 12-inch suction lines for the pumps. There was no way to see how operators would be able to access the valves above the suction lines within the model.” The VDC team pointed out the issue and suggested a design change that rerouted the piping so the valves could be easily accessed, simplifying maintenance and eliminating a safety risk.

The changes VDC made to the drawings made it easy for Goldbar to make a case for modifications in the original design. “Once they modified the piping, I could take screenshots and send them to the engineer to explain why we wanted to relocate some of this piping,” McInroy said.

With the final design changes approved, VDC coordinated with the Victaulic manufacturing facility in Edmonton, Alberta, to ensure all the components were prefabricated and prepared for shipment.

“It was a big weight off my shoulders,” McInroy said. “Having these items broken down into manageable spools that were palletized and itemized made it easy to stack them in the building and have everything available as we needed it.”

Receiving the prefabricated material in this way also simplified the process of moving large components down a stairwell and into a basement where they were to be installed, and the coupling design simplified assembly and disassembly. “It was very easy to undo two or four bolts and break the spool down,” he said.

“Our typical method of installation would have been to weld fittings,” McInroy explained, and that would have compromised their ability to meet the project schedule. Breaking down welded assemblies into smaller, more manageable lengths would have required more flanges and more welding, which would have added time and cost and would have meant adding welders to the crew. “Being able to break the spools down into manageable pieces made it easier for our guys to handle the material and get it to the location where we needed to install it,” he said.

Even though McInroy knew the grooved couplings would deliver efficiencies, the time required for the crew to install the piping exceeded his expectations. “The installers found it very easy to make adjustments,” he said, and that made it possible to complete the job with only two journeyman plumbers in a matter of a few days, enabling Goldbar to make up for much of the delay incurred at the front end of the project and finish the process piping portion of the project in a significantly compressed schedule.

From an engineering point of view, it is always a challenge to retroactively install major civil works in an existing residential/urban setting. Water and sewer servicing is an earthworks-heavy undertaking, and although enormously advantageous in the long run, it is very invasive during installation. Everything that can be done to speed up the construction phase translates into real quality-of-life improvements and reduces impact on the community.

Setting up for Success

The stainless steel system designed for this installation was not only constructed quickly, it also is aesthetically appealing, something that was important to the Nation, according to Tenham, who noted that making sure the local community was pleased with the result was important to McElhanney and to him as the project engineer.

“After many years of hard work, the Nation will finally be able to see this long-awaited goal come to fruition. Watching the Nation take pride in a functional and good looking pumphouse – which I know is also high quality – after all these years, is very satisfying,” he said.

“There was an awful lot of hard work the Nation did at the beginning. This has been their goal for a very long time” Tenham said. “With the completion of this project, they’ve been well set up for their next success story”