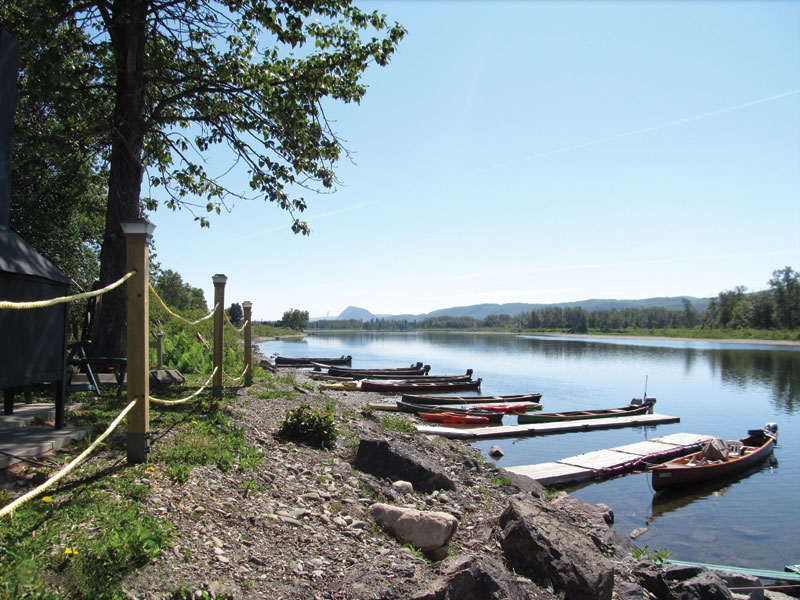 Ristigouche-Partie-Sud-Est (hereafter “Ristigouche”), a small municipality of 168 inhabitants located in Gaspésie, Quebec, is facing a lawsuit of $1.5 million by Gastem, a local private oil exploration company. This sum is more than five times the community’s annual budget. The reason? The municipal councial wanted to protect citizen’s rights to both safe drinking water and a healthy environment against the risks of drilling.

In this “David vs. Goliath” lawsuit, the short-term profits perspective of a private company is directly adverse to the sustainable development of the community and to the power of the population to protect its water.

In the spring of 2011, Gastem met on a few occasions with the authorities of Ristigouche and informed them about its intention to explore the grounds. In July 2012, the company obtained a drilling permit from the Natural Resources Minister of Quebec and proceeded to prepare the grounds and began the construction of some infrastructure, notably a drilling platform and a tailing pond.

In the winter of 2013, citizens of the municipality were informed that the drilling site chosen by the company was very close to their homes and their artesian wells. Truly concerned about the risks associated with drilling and oil exploitation, a large majority of citizens—92 out of 168—signed and deposited a petition to the municipal council. This petition asked that elected representatives pass a bylaw to protect their water, health, river, and global environment against the drastic consequences that an oil leakage would have on their territory.

Local governments are not obliged to wait for an ecological disaster to regulate an activity that may cause damages to the environment and to public health. The Quebec Court of Appeal recently ruled that the precautionary principle allows governments to regulate private industries’ activities that present a risk of polluting the environment, even if there is no uncontested scientific proof that damages will or can occur. This precautionary principle is now recognised in public law in Canada, as well as in Quebec, as a non-written guiding principle that can be used by judges in the interpretation of the law.

Despite the principle that Canadian municipalities can only exercise the powers delegated by provincial government—since the Constitution Act of 1867 gives provinces the power to regulate “[m]unicipal institutions”—many local governments in Canada are benefiting off large powers granted by provincial laws. In 2005, the Quebec Legislative Assembly adopted the Municipal Power Act that “assigns general […] regulatory powers in various areas of jurisdiction to local municipalities […] in order to give them more flexibility” and, should we say, more autonomy. In virtue of that law, local municipalities have jurisdiction over many fields impacting citizen lives, including the environment.

In March 2013, in accordance with the powers delegated to municipalities by the province of Quebec, and considering the legitimate preoccupations and expectations of its population, the Ristigouche municipal council adopted a bylaw regulating oil exploration and exploitation.

“In the absence of any provincial law protecting water, a majority of residents firmly took their stance to council demanding protection of their drinking water,” said Mayor François Boulay. Among others measures, the bylaw forbade any drilling within a perimeter of two kilometres from drinking water sources and required companies to provide information to the municipal council regarding any chemical, organic, or mechanic process that could alter the quality of water. Also required is the submission of an environmental study attesting that planned activities do not present any risk of contaminating the drinking water and a cautionary provision of $1 million in the event of a leakage or other damages to the environment. All the conditions imposed on private oil companies have been adopted to ensure the respect of the citizens’ fundamental rights to safe drinking water as well as their rights to consultation, participation, and information regarding the development of their territory.

Gastem is now suing the municipality of Ristigouche and alleging that the municipal bylaw prevented it from pursuing the exploration in which it had invested $1.5 million. The company is claiming compensation without having investigated the feasibility of their project on other sites within the said municipality. Since then, the Government of Quebec adopted its own bylaw that forbids any ground drilling within a limit of 500 metres from drinking water sources, removing this topic from municipal jurisdiction. With this new provincial bylaw, Gastem would still be prevented to pursue its activities. However, the company is not suing the provincial government and the provincial government has not offered any support to the Ristigouche municipality.

When the government aligns its interests with those of private oil companies against the common good and collective rights of communities, from which it hold its mandate, citizens must rely on each other to enforce their rights.

Boulay said it was “unequivocally preposterous” that inhabitants of a rural community “should not have the democratic right to legally protect their water.” He added that, as the single most important resource to life, water should be more valued than “the thirst for profit of private sector investors.” Instead, he said, the government continues to look the other way.

David Robitaille is a professor of constitutional and human rights law at the University of Ottawa. This article appears in Water Canada’s January/February 2015 issue.