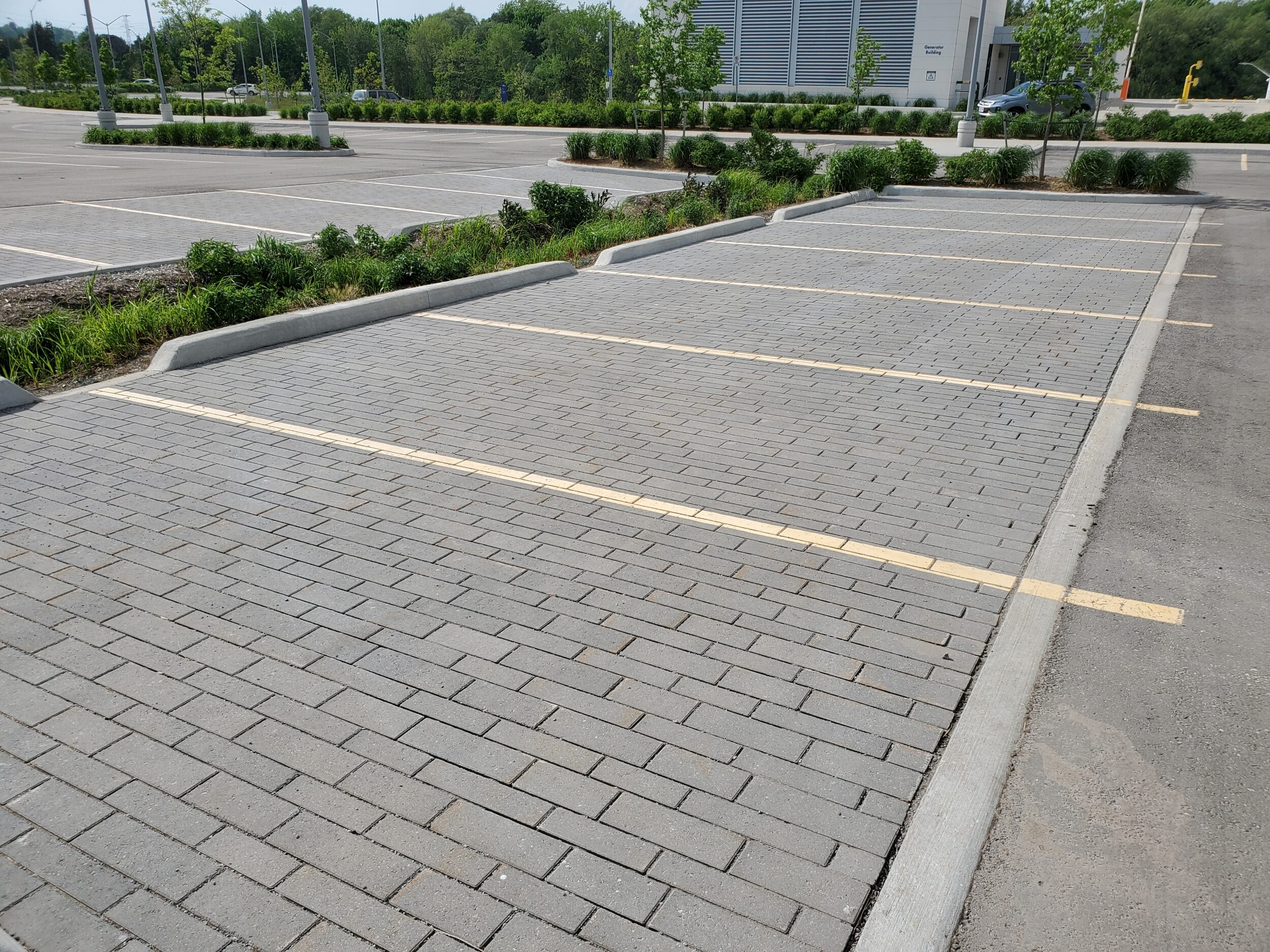 We need to think differently about roadways.

Linear roadway and street corridors are often constrained in approaches to providing traditional stormwater management (SWM) measures. Yet these corridors can make up about 40 per cent of the urban area of a large city and contribute most of the dry weather pollutants that impact our lakes and rivers. Corridor widths are often standardized by municipal requirements and determined by the required number of traffic lanes and standards for boulevard design, not by SWM requirements. The demands of the trafficked area are such that integrated runoff management systems inside the road corridor that would best approach a source control definition are discouraged or very short lived. The items best suited to addressing runoff management, such as large trees, are often viewed as obstacles or impediments to traffic design and flow management or they conflict with utility requirements.

Green infrastructure approaches are a step in the right direction, but right-of-way dimensions and the required roadway functions can limit their effectiveness. In addition, most green infrastructure design approaches to existing roadways are retrofitted, with all of the built-in limitations that retrofits bring.  An alternate approach that incorporates street character, corridor setting, and vehicle and active transportation functions is required to ensure runoff impacts from these urban areas is addressed in a manner that doesn’t impact the vehicle and active transport needs of the street users.

The Green Streets design approach that has been developed for the City of Toronto moves away from the concept of collecting roadway runoff with a storm sewer system and moving it to a central location, such as a SWM pond, as the only method to address precipitation impacts. It also removes the idea that certain classifications of roadway should receive similar approaches based on a potentially limiting set of previously approved measures or standards. A newer method that systematically determines which approaches to use based on street “reaches” (from intersection to intersection), its setting, its character, the population it serves, and the functions it provides, presents an opportunity to “dial in” performance while passively supporting corridor vegetation that is often otherwise neglected.

The Green Streets design process is based on a capture of small but recurring volumes of runoff associated with common precipitation events (i.e., “rainwater management”). This is as opposed to larger, but less common storm events that deliver substantial volumes of precipitation in relatively short periods of time and require traditional drainage infrastructure (i.e., stormwater management).

The smaller volume but more common precipitation events deliver the largest component of annual rainfall. As an example, in southern Ontario, approximately 95 per cent of annual rainfall falls in events of 25 millimetres (mm) or less rainfall depth. Of these, 70 per cent fall in events of 10mm or less. These events can be captured and utilized in multiple smaller scale areas along a street reach, before runoff is generated and directed to the public drainage sewers or receiving water systems. This can be accomplished using distributed low impact development or vegetative systems that fit with the roadway corridor but do not impede its functions. Think of it as a series of sponges. When exposed to the larger storms, these distributed systems will simply overflow to the drainage system.

The selection process begins with an inventory of surface and subsurface corridor features compared with municipally-prepared mapping of its natural features, including soil type and identified flooding hazard zones. It then follows a long-list approach to available runoff reduction and treatment options that mesh with and complement the street’s characteristics, resulting in a customized approach that integrates green infrastructure functionality into the street fabric. This process then leads directly into the conceptual design process followed by preliminary and detailed design and subsequent construction.

This approach was applied to Winnett and Schell Avenues in Toronto, two residential street areas with different street characteristics. Winnett Avenue is a densely developed, one-way street with virtually no boulevard area and a constant southerly grade. Houses along the street have small front yards with numerous trees that will benefit from passive irrigation of road runoff in the street. Schell Avenue is a two-way residential street with relatively less density, but larger traffic volumes. Trees are fewer but larger, with larger turf areas in larger front yards. The process is helping to understand how the Green Streets process is implemented across varying street types, with extension to main thoroughfares, arterial roadways, and destination spots or “famous” streets.

At the north edge of Winnett Avenue, near a school block, where the boulevard area widened sufficiently, a bioswale treatment is planned for water balance and water quality treatment. It will be installed as a future project extension. Downgrade, where the street boulevard narrows and houses are present close to the street, a strip of permeable paving for parallel parking areas is being installed prior to oil/grit separator units for infiltration and water quality treatment. On Schell Avenue, the available boulevard area is elevated so a bioswale treatment for roadway runoff isn’t feasible and another strip of permeable pavement for parallel parking was installed. Oil/grit separators will perform backup water quality treatment prior to discharge to storm sewers.

There are types of roadways where the implementation of Green Streets can be most effective. Road corridors located in sandy soil areas are better suited to Green Streets as infiltration-based measures have the greatest cost-benefit ratio. Similarly, marquee streets and “destinations” can benefit from century-old trees in their boulevards that are passively supported by green streets approaches such as continuous soil trenches where each tree has a minimum soil volume availability. Roadways with large external drainage areas should bypass runoff from those areas around the Green Streets designs to avoid overwhelming them with runoff.

However, municipalities will require high quality background and characterization of their roadway assets to allow for a systematic evaluation of how to apply these measures.

Runoff reduction and use of available runoff for passive area vegetation support provide a greater return on investment from the perspective of reducing the urban heat island effect, avoiding future downstream infrastructure upgrade costs, and improving street character. Without those systems, the downstream receiving water systems will need to absorb those impacts.

Using a full-parameter consideration approach in designing a runoff management system that complements street functions is a challenging task, which requires thinking beyond the direct issue focus of drainage design. Each street requires a customized approach derived from a systematic consideration of its individual characteristics for each reach, rather than a standardized approach based on roadway classification (local, arterial, collector, etc.). The corridor setting will establish the potential of the Green Streets approach to be effective, but the systematic approach will ensure that each street can maximize its overall benefits and minimize its runoff footprint.

This article was written by Steven van Haren, manager of land development/water resources at WSP in Canada, for the July/August 2021 issue of Water Canada.