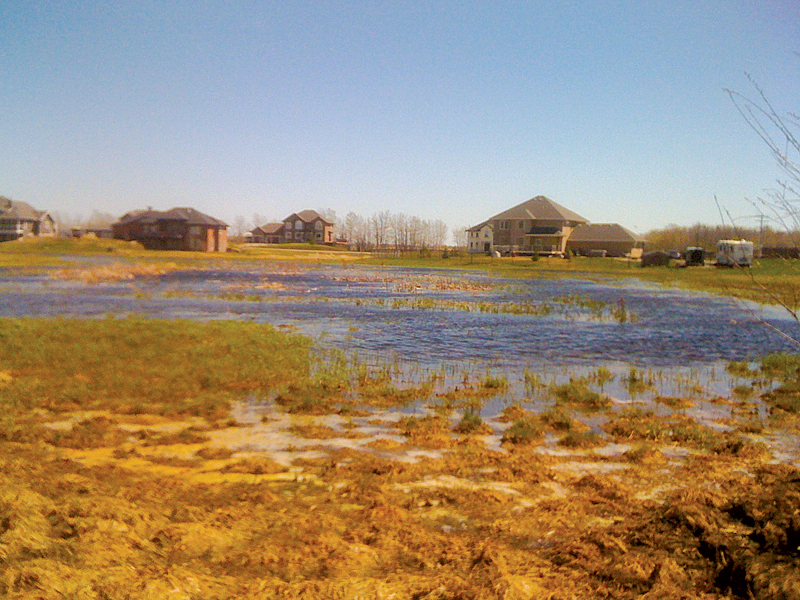 Albertans might support the XL Pipeline as a means to move one resource out of the province, but at the same time, there’s a struggle to protect and sustain another resource—water—within provincial borders. Groundwater supplies are now a key consideration in the approval process for all new subdivisions in the province. In order to move forward, developers must prove that their projects will not deplete local groundwater aquifers or contaminate the local environment with untreated wastewater.

One solution to both issues is to design and install large on-site community wastewater systems, which recycle the treated effluent and put it back in the local hydrologic cycle. Depending on the disposal method, on-site community wastewater systems prevent depletion of local aquifers by keeping the water on site and thereby reducing overall water loss in the region. Because these systems are designed and presented as part of the initial development plan, this approach puts water use and the wastewater treatment process in the forefront of development planning and raises awareness about sustainable water management with regulators, developers, and future homeowners.

Over the last three years, a growing number of counties and municipal districts in Alberta have started to support community wastewater systems. Rocky View, Lacombe, Clearwater, and Leduc counties have established policies for owning and operating community wastewater systems under their development authority. Other counties, such as the Municipal District of Foothills, Warner, Beaver, Yellowhead Counties, and the Kananaskis Improvement District, allow systems to be constructed within their borders, but do not take over ownership. Alternatively, the systems can be owned and operated by the developer or homeowner’s organization provided they contract a certified operator to provide required system maintenance and reporting.

Although there is a transition period between initial construction and the point at which there are enough homes to fully pay for system maintenance, ownership of community wastewater systems can be profitable at full capacity and with the ownership of multiple systems. More importantly, county ownership is an innovative way to control and effectively manage the wastewater infrastructure in new rural developments unable to connect to regional wastewater treatment plants. Counties already have billing services and most have the capital resources to fund significant capital replacement projects, should they be necessary. In addition, the counties provide a more stable long-term ownership organization compared to homeowners. This is the reason that county ownership is the preferred approach by Alberta Environment.

Thanks to a streamlined approval process (due to education and an increased number of projects), community on-site wastewater systems have been approved in three of the five regions of Alberta Environment. Two projects have been approved by the Northern region, two by the Edmonton region, and one large project, Silverhorn, by the Calgary region. The other two regions, Red Deer and Lethbridge, currently have pending projects expected to be approved by the end of 2013.

Alberta Environment has also released a much needed design guidance document for large soil disposal systems. This supplements the design guidelines in Alberta’s Standard of Practice for Onsite Wastewater Systems (2009), which focuses on smaller systems. The new guidelines focus on the required hydrogeological investigation required for large soil disposal systems in order to fully understand the fate and transport of the infiltrating wastewater.

In Alberta, the largest on-site wastewater treatment and disposal system serving a residential subdivision was approved in 2011. The Silverhorn Development, which is currently under construction, will consist of 87 three or four-bedroom homes connected to a community treatment system. Wastewater will be collected via septic tank effluent pumping (STEP) units, which will pressure dose the liquid effluent to the community treatment site, a nine-acre public utility lot (PUL). The solids will remain in the STEP tanks at each lot, which will be inspected on a yearly basis by Rocky View County operations staff and pumped out as needed. Although not uncommon in Alberta, this will be the first STEP system in Rocky View.

Secondary treatment was designed using Orenco’s AdvanTex Technology. Eight AX-100 units will be installed in two phases to treat a wastewater flow of 158 m3/day. This is an average installation size for Orenco, but will be the largest AX-100 installation in Alberta. Following secondary treatment, effluent will be pressure dosed to trenches incorporating Infiltrator subsurface chambers installed at five-foot spacing in a seven-acre field.

Due to the size of the development, several regulatory hurdles were encountered in the project, mostly due to the operational requirements of the alternative technologies and hydrogeological concerns related to the large disposal field. A comprehensive hydrogeological investigation determined potential impacts on nearby wells and surface water bodies. Now a series of monitoring wells identify baseline groundwater conditions and provide long-term monitoring and compliance points.

When enough homes are constructed to fully finance the operation of the wastewater system, Rocky View County will take over ownership. In the meantime, Rocky View will provide the required operations of system to ensure a smooth transition at the appropriate time.

A first-of-its-kind alternative disposal method was recently approved in Leduc County. Country Lakes Development, an existing 15-unit subdivision, will now discharge its treated and disinfected effluent into a natural wetland. The discharge, which will simulate natural hydraulic flow into the wetland, will enhance the wetland by providing a nutrient source to encourage plant diversity and a stable water supply. Before the discharge was approved, the developer treated the effluent in a Bionest treatment unit and hauled the treated effluent to a receiving facility. Most of the year, this involved three trips per week and was a costly approach. With this new approach, the Bionest units will remain in operation with the addition of a UV disinfection system.

Due to this project and with assistance by SD Consulting, Leduc County recently issued a policy for ownership of community wastewater systems. Leduc County will operate the Country Lakes project on a two-year pilot basis. If the system is working as expected at that point, the County will take over ownership and operations. Due to the innovative use of the water and the alternative approach, the system monitoring will be intensive during the first two years to ensure properly treated effluent is reaching the wetland and not impacting downstream water bodies. The developer, Bob Thiessen, will continue to operate the system and provide the required reporting to Leduc County and Alberta Environment.

Water sustainability continues to be a paramount issue in Alberta. In order to maintain existing water supplies and natural features and protect them for future generations, it will be important to have sustainable approaches to water and wastewater infrastructure in new rural projects. Wastewater systems that recycle the water for beneficial uses, whether it is replenishing groundwater or improving local wetlands, should be a preferred approach by both regulators and developers.  WC

Shane Sparks is a principal and founder of SD Consulting Group.