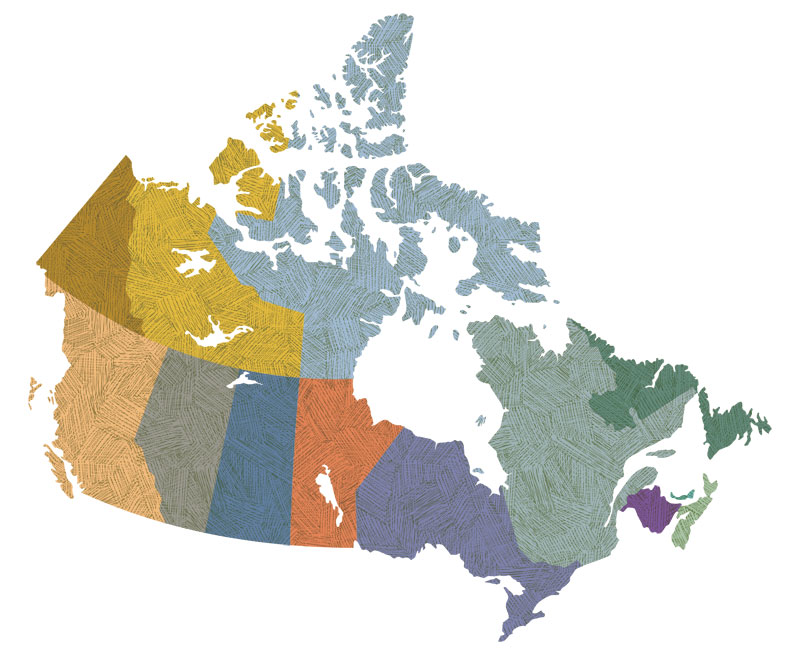 Canada’s water challenges and the ways provinces and territories address those challenges can be so similar yet entirely unique. Each jurisdiction’s positions on issues of supply, conservation, and management will determine what regulations and policies are priorities. While it may be difficult to keep track of the latest updates in every region, the Living Water Policy Project provides a snapshot of updates from across the country:

After six years of public consultations and government-led discussions on water management and policy reforms, the Government of British Columbia passed Bill 18-2014, the Water Sustainability Act, after being introduced in March 2014. The act updates more-than-100-year-old legislation that addressed relics like the gold rush and ranching. For this legislation to be effective, a number of critical regulations must be passed, including those related to groundwater licensing, defining use requirements, governance, and planning and protecting environmental flows. It is likely that over the next three years, those critical supporting regulations will be developed and finalized. Oliver Brandes from the University of Victoria’s POLIS Water Sustainability Project said, “We have to stay vigilant, because there’s lots of work ahead, but this is definitely a milestone worth celebrating.” These regulations will be critical to ensuring that the framework set out in the Water Sustainability Act becomes fully and effectively implemented.

In September 2013, the Alberta government introduced a new and much-awaited wetlands policy. The new policy made a shift from the previous principle of “no net loss” in settled or white regions of the province to a system of valuing wetlands to inform management, protection, and restoration provincewide. A wetland value seeks to reflect the relative importance of a wetland from both an ecological and anthropogenic perspective. It is determined by assessing various metrics, including biodiversity and ecological health, water quality improvement, hydrological function, human uses, and relative abundance. This value then determines appropriate ratios for wetland replacement should loss be unavoidable. According to Thorsten Hebben, the section head of Surface Water Policy for Alberta Environment and Sustainable Resource Development, the change was made to enhance the rigour around the application process as the relative value of the wetland increases. He described how the changes may work in practice: “The proponent would need to state a stronger case on the need for development activity to take place on a wetland where higher value is established.” He added that, “In the event that development is approved, we would be getting a higher proportion of wetland replacement.” This shift is more comprehensive than a simple 3:1 replacement ratio that was in effect in the previous no-net-loss policy. The policy will come into full effect in settled areas by late summer 2014 and in “green” areas by September 2015.

See also  Can We Rely on Technology to Guarantee Future Water Resources?

The Government of Saskatchewan released the 25 Year Saskatchewan Water Security Plan in 2012 that seeks to ensure the sustainability and quality of the province’s surface and ground water supplies while protecting drinking water supplies from the source to the tap. But the key to all of this is new water legislation, slated for release in 2014. Dale Hjertaas, executive director of the Saskatchewan Watershed Authority, said the current Saskatchewan Watershed Authority Act needs to be modernized to deal with policy changes identified in the new plan. “You need regulations and policy, but you can’t go forward without changing the legislation,” he explained. While the province begins the process of updating legislation, the Water Security Agency Plan for 2014-2015 outlines standard strategies and key actions.

Manitoba: Managing drainage to save an ailing lake

In 2013, Lake Winnipeg was named one of the most threatened lakes in the world by Global Nature Fund. As blue-green algae blooms continue to plague the fifth largest lake in Canada, the Manitoba government has announced new measures to curb nutrient loading in the lake caused by surface water drainage. In June 2014, the Surface Water Management Strategy was released, identifying 50 actions to control nutrient loading in the lake alongside management strategies to address drainage and flood control. “Manitoba’s proposed regulatory process for drainage and water retention will improve wetland protection and help to mitigate the effects of climate change, flooding, and nutrient loading on our lakes,” said Scott Stephens, director of regional operations in the Prairies at Ducks Unlimited Canada. “The Manitoba government’s commitment to a no net loss of wetland benefits approach should be commended as it demonstrates their resolve to mitigate environmental problems that are costing Manitobans significantly.” According to Ducks Unlimited, it is estimated the protection of Manitoba’s 275,000 acres of seasonal wetlands would prevent more than 200 tonnes of phosphorus from entering waterways annually. The strategy is open for public consultation. Visit gov.mb.ca conservation for more information.

Ontario: Stalling on the Great Lakes

The Great Lakes Protection Act is a piece of legislation that promises to establish targets and tools to protect and improve the health of the Great Lakes. The Ontario election has halted the process, and it is uncertain if the effort to pass the act will survive a new Ontario government. The comment period for the Ministry of the Environment closed June 9 for a proposed regulation that will limit the ability to make large water diversions from one Great Lake’s watershed to another. The Ontario government committed to such regulations years ago and has not prioritized finalizing these new regulations, despite making changes to legislation in 2007 to allow for them. “It is imperative that Ontario finish these regulations and get the 2007 amendments to the Ontario Water Resources Act proclaimed. We are now the last to act of the eight states and two provinces who signed the agreement in 2005. All of them are waiting for us in order for that region-wide agreement that protects against large-scale diversions to take full effect,” stated Theresa McClenaghan of the Canadian Environment and Law Association.  This regulation would prevent new or increased intra-basin transfers that, if allowed, would provide little motivation for Ontario municipalities to seek to reduce existing intra-basin transfers.

In 2002, the Government of Quebec released the politique nationale de l’eau (National Water Policy), and in the 12 years since, the government has made significant progress on implementing a watershed governance structure. The Regroupement des organismes de bassins versants du Quebec has been established and is making progress on regional water initiatives.

In June 2012, Quebec enacted a moratorium on fracking exploration and drilling to better understand the technology and the risks to groundwater. This moratorium is still in place while studies and research continue.

Also in 2012, Bill 71 was passed in the legislature requiring wetland compensation for projects affecting wetlands. Unique to this law is that the government made Bill 71 retroactive. Section 3, therefore, provides that any compensation measure imposed in an authorization or a certificate of authorization before March 12, 2012 is valid.

Newfoundland and Labrador: Understanding and adapting to flooding

As part of the 2005 Climate Change Action Plan, flood-risk mapping was updated for the region around the City of St. John’s. The completed study provides flood lines for the one-in-20-year and one-in-100-year annual exceedance probability (AEP) flood event, flood lines based on current climate change projections, and flood inundation depth mapping. While the study incorporated climate change scenarios, it did acknowledge the uncertainties around forecasting. For municipalities located within the study area, the adoption of the new flood lines into municipal planning and development regulations was recommended.

As per the government’s commitment in the Water Resources Act (2002), there has been regular reporting on drinking water quality data and efforts to protect source to tap drinking water. Drinking water projects valued at nearly $9 million are currently underway in the province, including new watermains, portable water dispensing units, and other projects in six communities. This contributes to the $650 million spent on more than 1,200 water, wastewater, recreational, and municipal infrastructure projects invested in by the province since 2008.

Commitment on progress toward a completed provincial water strategy continues to stall under the current provincial government. Debate on fracking exploration and the west-east pipeline proposal has left many communities concerned about the vulnerability of their groundwater and aquifers. Stephanie Merrill of New Brunswick’s Conservation Council said, “Groundwater monitoring and aquifer mapping [are] necessary fundamental knowledge to understanding the risks of energy production.” After three years of a multi-stakeholder engagement process, there has yet to be a wetland conservation strategy produced. This comes after the 2011 release of a predictive wetland map generated huge public backlash. A longer-term wetland mapping solution was promised by then-Environment Minister Margaret-Ann Blaney, but no results have been released yet. Finally, a newly released provincial forestry management strategy, which increases harvesting and decreases forest conservation, could impact stream and waterway buffers currently protected in the Clean Water Act. Details on the strategy’s implementation have yet to be released by the provincial government.

The Department of Environment released a progress report on the 2010 Water Strategy in May 2014. While some progress has been made in flood mitigation and the community-based monitoring program, it is felt that the overall progress of implementation of the water strategy has been slow. The sparseness of this progress report suggests the province is no longer committed to making water a priority. Jocelyne Rankin, water coordinator at the Ecology Action Centre, said that, “After committing so many provincial resources to developing the strategy, including comprehensive public consultations beginning in 2008 and the release of multiple reports, we should be reporting on great progress toward cleaner, safer water.” Yet serious concerns are increasingly coming to the forefront for Nova Scotians. Challenges include an effluent spill and the toxic legacy of the Abercrombie Point pulp and paper mill, runoff from mink farms causing blue-green algae pollution, and the risks posed by fracking developments.

The past year has seen a number of significant changes to laws that govern Canada’s waters at the federal level. Here are some examples:

The Navigable Waters Protection Act was renamed the Navigation Protection Act. Changes also redefined “navigable” to exclude “minor waters” and “minor works” and reduce the number of waterways that would be protected under the act.

The Safe Drinking Water for First  Nations Act was approved as an enabling piece of legislation that will allow the government to develop, in partnership with First Nations, enforceable federal regulations to ensure access to safe, clean, and reliable drinking water; the effective treatment of wastewater; and the protection of sources of water on First Nations lands. WC