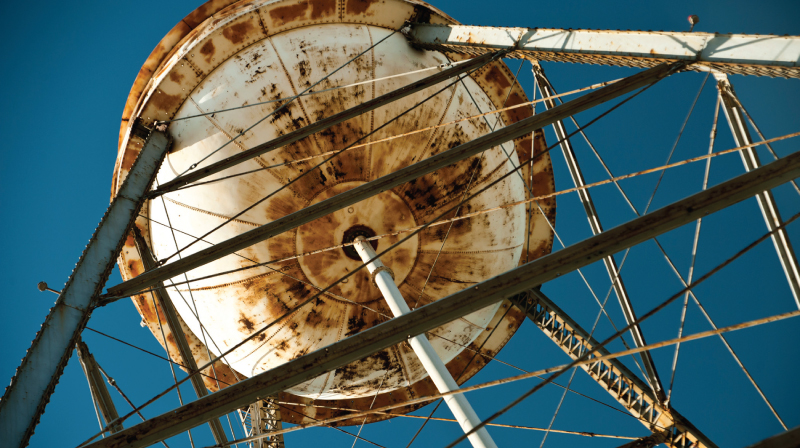 Canadian cities may be booming, but according to Statistics Canada’s findings, smaller communities are experiencing a widespread drop in population. In Nova Scotia, the rural-urban gap has widened immensely since 1851, when 93 per cent of provincial residents inhabited rural areas. In 2006, only 45 per cent lived outside of urban centres. The demographic has been slowly and steadily shifting for over a century, bringing with it the emerging challenge of supplying water to areas geographically distant—and sometimes geologically distinct—from the nearest city.

In January 2011, the Nova Scotia Utility and Review Board (URB) heard an unusual case related to one rural area served by an aging water treatment facility. The Municipality of the District of Chester applied, on behalf of the Mill Cove Park Water Utility, for permission to discontinue provision of treated municipal water to a small community on the Aspotogan Peninsula, Mill Cove Park. The reason for the application was a combination of two factors: excessively high fluoride levels in the groundwater, paired with a customer base too small to afford the ongoing costs of treatment and infrastructure maintenance. The water utility in question was part of a former military base, built in 1967. The federal government transferred ownership of the base to the Aspotogan Heritage Trust in 1996 and, in 2003, it became a municipal responsibility.

Consulting engineer Gerry A. Isenor told the hearing, “We simply have too few customers. If we had [400] or 500 customers, it might be a possibility to make [ the Utility] work at some kind of a reasonable rate structure, but utilities with around 50 or 60 customers are going to struggle unless they have a water supply that’s naturally treated from the day that they pump it out of the ground.” The water at Mill Cove Park exceeds the 1.5 milligram per litre (mg/L) fluoride maximum specified in the Canadian Drinking Water Guidelines (CDWG), as set out in 1996 and again recommended in 2008, likely due to naturally-occurring fluorite in the area.

While educational materials and even online maps are widely available to alert the public to the risks of naturally-occurring arsenic in Canadian groundwater, the same cannot be said for fluoride, a very reactive anion. Fluoride is not regarded as a common groundwater contaminant in Nova Scotia, although some areas, notably near the Carboniferous Sedimentary Basin, have elevated levels.

Bruce Forrest, municipal director of solid waste and former director of public works, informed the URB that increasingly rigorous national standards for water treatment (in the CDWG) posed an insurmountable challenge to Mill Cove Park Water Utility, from a population and cost perspective. “What has caused us the most difficulty is trying to stay current with the regulations as they change,” he observed. “The Province of Nova Scotia adopted a Canadian drinking water standard, which is a fairly onerous standard, and it’s been difficult for us to maintain and meet those current standards. And then we also discovered fluoride in the water. As those guidelines became law, the standards for fluoride were difficult for us to reach.”

The means to remove fluoride from groundwater are available to utilities across the country. In 2009, Health Canada suggested three methods to address fluoride: “Blending of fluoride-rich waters with waters of low fluoride content, the selection of low-fluoride sources and the removal of excess fluoride concentration by treatment processes at public water supply or household level.” It also mentions activated alumina (AA), ion exchange, softening with lime, and reverse osmosis as viable options for its removal.

Nonetheless, fluoride remains a tricky substance to control—especially when a water treatment budget is disproportionately low in relation to the cost of implementing the national standard. Forrest’s statement on the CDWG illustrates an emerging problem in rural areas: what happens when new criteria can’t be met without a major population or water rate increase?

In the case of Mill Cove Park Water Utility, the answer was cessation of service. The Nova Scotia URB approved the “application to abandon delivery of water to [Mill Cove Park’s] customers” on March 28. At the public hearing on the matter, the one formal intervener, representing a local property management company, supported the shut-down. When users’ water rates became the second-highest in the province in 2009 ($830 per household annually), but barely made a dent in the current operating deficit of $240,000 and costs of replacing deteriorating infrastructure, the lack of sustainable operations all but sealed the fate of the utility. Thirty-seven wells and pumps will now be installed at a cost of $3,500 each (to be repaid by users over four to five years), with maintenance responsibilities and costs now delegated to residents. The local school will retain municipally-provided maintenance, testing and treatment of its water, but only via a service contract between its owner and the municipality.

On the question of what this decision means for other rural water utilities, it appears that a precedent has been set in Nova Scotia. The transcript of the hearing shows that the URB itself anticipated that applications for abandonment of services might become more common: “The Board expressed a concern that the situation faced by the municipality might encourage other utilities to seek to abandon their customers due to factors, such as, the high cost of compliance with environmental regulations.”

One board member, Roberta Clarke, asked Isenor, “Is there going to be a movement to abandon systems and let people fend for themselves?” He responded that the Mill Cove Park Utility was a “relatively unique” case because it served so few customers (approximately 60). Yet if Statistics Canada’s population data trends persist in Canada, there will be many more rural areas facing this identical conundrum in the near future—unable to sustain a regional water utility due to too small a customer base, and unable to grow a customer base because the area is unattractive to people who want a home with municipal water supplied.

Since the Mill Cove Park ruling, the sparsely-populated town of Canso, Nova Scotia has opted for a 100 per cent increase in water rates over decommissioning its water treatment facility. It remains to be seen whether Nova Scotia’s first-ever approved abandonment of service proves a harbinger of the future of rural water utilities.  WC