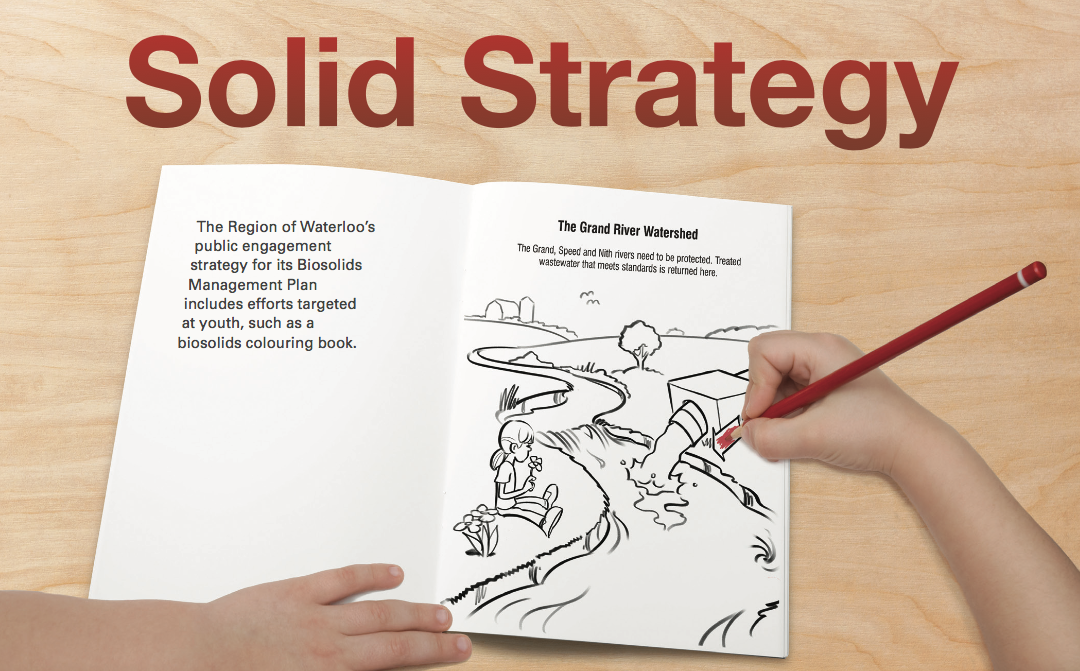 On a chilly April evening in 2013, a large group of residents filed into a crowded room at recreational facility in Cambridge, Ontario. The mood was beginning to intensify, as the lineup expanded down the hall. To an outsider, the scene resembled a checkout counter at Toys “R” Us on Boxing Day.  But it wasn’t cheap toys that roused these residents—it was a proposed $80-million biosolids plant that was to be built at the southeast end of town.

Kaoru Yajima, senior project engineer for the region, was at the centre of it all. As the project lead who championed The Biosolids Master Plan, he was there to answer questions and describe all the benefits of the project. By the end of the evening, he was surrounded by irate residents demanding answers on why they weren’t consulted.

“In our eyes, we did the discretionary public consultation early in both of the two locations that were closest to the two [site] options that were identified,” said Yajima. “This was more than what was required under the class EA process. We had asked the public for their input. A lot of people told us that this was too much information and that they weren’t agreeable to the preferred station,” he said.

The top three concerns voiced were odour, trucking, and public safety. “Obviously we do our due diligence to have the answers for those types of things, but what we found was by the time we got to the public consultations, many people already had their minds made up and were dead set against the facility.”

In the months that followed, the public’s malaise did not go away. Instead, it deepened, and had become the frequent topic of debate on local radio shows, social media groups, and during the regional elections. Of the tri-cities that were to benefit from the project, it was if Cambridge was the poor stepsister, fated to assume the unwanted waste of her sisters.

At a June 17, 2013, Cambridge council meeting councillor Neil Ritchie, of North Dumfries Township, and resident, Harold Drewitz told Waterloo Region’s director of water services, Nancy Kodousek, that they were unsupportive of the project, because of the cost, inadequacy of the public information sessions, and the transparency of the process.

By September, the Region of Waterloo council decided to scrap the plans for the proposed facility and start the process over. The lesson was this: certain kinds infrastructure projects require a more deliberate and concerted effort to gain input from the public, above and beyond what is required, and that complex issues can’t be explained in one session.

A new direction
Although the Region has a biosolids Master Plan in place (and has since 1990), the community’s growth projections necessitated a new, forward-looking plan. At present, the Region operates three large distributed wastewater plants that produce 18 Olympic-sized pools worth of biosolids every month. The existing biosolids treatment facility has only about a day’s worth of storage, and it costs about $4.7 million to ship the excess biosolids for agricultural land spreading and northern mine reclamation (both beneficial uses). However, both of those uses are seasonal. In off-seasons, the waste must be trucked away to landfill.

Under the proposed plan, a new facility would be built that creates pellets out of the biosolids. This material could also be used to deliver agricultural nutrients, with the added potential to be sold for energy production. The plant itself would use heat from a steel smelting plant, a form of recycled energy that scored well in the Region’s assessment of option using triple bottom line criteria. Though the proposal had been deemed the best and most economically and environmentally responsible choice for the Region, all options would go back on the table.

“Typically when the Region does this kind of technical study, it is predominantly engineering teams that we involve. But the second time around, we questioned how we were going to engage the public. It’s that old adage of knowing where your blind spots are. That’s why we brought Dan in, to look at the task at hand and bring a different view,” said Yajima.

Dan Meagher has been a communications coordinator of water efficiency in the Water Services branch at the Region of Waterloo for twelve years. Meagher joined the biosolids team to advise on the engagement process. “The public wanted to be consulted early and often,” said Meagher.

“What went off the rails [in the first Master Plan] was that people didn’t really understand what it was we were talking about. When that’s your starting point, you are kind of doomed to failure. So, we wanted to go through this with an open mind and to make sure that we were all having the same conversation,” he said.

The group put forward a bid for consulting services to produce a second, revised Master Plan. Only this time, they included a strong emphasis on communications and engagement in addition to the engineering services required for the technical assessment. In June 2015, the Region entered into agreement with Dillon Consulting Limited to provide the services for $1.4 million.

“We understood that there are really two audiences: the people who have a stake in the project, and maybe have a very fixed idea of what they want to happen, and the community at large. The community at large is a mixture of people who don’t care, don’t understand, and/or do care and haven’t had the background,” said Meagher. To meet the needs of both groups, the plan would try to build a much greater community understanding of the issues at large.

Colouring outside the lines
With the help from Dillon Consulting, the team created a multi-faceted plan to reach as many people as possible. First, they branded the strategy with an easily identifiable green-brown-and-blue logo to symbolize green energy, brown for earth, and blue for water. They also dropped the use of the term Biosolids Master Plan, recognizing that it sounds institutional and intimidating.

“The Master Plan only refers to the big binder that you have at the end of the project. We called it a Biosolids Strategy to convey that it is a work in progress […] Even that slight nuance—as an engineer, I would not have picked up on that,’” said Yajima.

The new strategy included an online survey (that reached over 500 people), webinars, youtube videos, a theatre-style presentation on biosolids by CBC host Bob MacDonald (that drew over 100 people), a biosolids school science fair, a biosolids colouring book, and dozens of pop-up events at community gathering points such as the farmer’s market, Strawberry festival, and EcoFest (where over 400 people stopped to learn about the initiative). They even hired a telemarketing team to phone people at their homes for feedback.

“The old way of doing this was to go to a town hall or a church and set up some poster boards and invite the community out,” said Yajima. Meagher added that, “Sometimes you get a bit of tunnel vision when you’ve been [at] this a while, in terms of who you hear from […] If you don’t make the effort, then you only hear from one pocket of residents,” he said.

Karla Kolli, a partner at Dillon Consulting Limited, and leading consultant on the project explained, “The Region is using this as an opportunity to address the longer-term vision, for example, by reaching out to youth. When we hosted a science fair for grade seven and eights, we used the biosolids project as a way to teach young people about what happens to water after it goes down the drain. Now there are efforts underway to pool resources to continue to teach that,” she said.

Morgan Boyco, a community and environmental planner at Dillon, added that the Wellington Science and Engineering Fair reached over 200 kids from around the region. “That kind of approach has the potential to expand out the message to their parents and friends. With the colouring book, there is the potential their parents will look over their shoulder and read it, and visit the project website,” Boyco said.

Technical experts delivered the information that was necessary for the public to understand, but then Meagher and Dillon worked together to make it as simple as possible.

“The overall philosophy is always about trying to reduce confusion. When you dump a whole lot of information on people, or you make it hard to locate, there is a certain perception that goes with that. Everything we are doing is trying to break down that wall and say: ‘we really did make our best effort so that you could find it, you weren’t confused, and it was simple,’” said Meagher. “We also learned that you don’t pick up an audience on day one and carry them through to the end. People join at their own discretion, at their own convenience, and people jump off at the same rate.”

So the team designed a process that would allow people to jump in or out at any time, ensuring that all levels and details of resources were available at all times. “It’s about being consistent,” Meagher said.

The process is far from over and no decisions about the strategy have been made. The next step is to begin to convey information pertaining to the various options for managing biosolids in the future. The team plans to use the values that have been identified by the community—things like managing odour, keeping costs down, and public safety—as the criteria against which the various options will be measured. All this information will then be shared for more input.

“I think we have only scratched the surface in terms of the engagement. But at the same time, it is all going according to plan,” said Yajima. “We knew that the education component was going to take some time. People need to understand how much biosolids material we produce, where it goes, what kinds of regulations must be followed […] There is no way that [we] can start talking about alternatives, evaluations, and the selection process, never mind the processing of the biosolids before this. Those things take time for people to understand. The general population [doesn’t] think about those things. So we are making inroads there,” said Yajima.

He added, “When you start talking about building a new facility, there is often public interest. But what I find more and more in this industry is that people want to know more about their drinking water, where their wastewater is going and how it’s being treated, and how the water bodies are affected. On top of that, now that the term biosolids is a little more prevalent in society, people want to know what happens to our biosolids.”

To learn more about the Region of Waterloo’s biosolids strategy, visit regionofwaterloo.ca/biosolids.