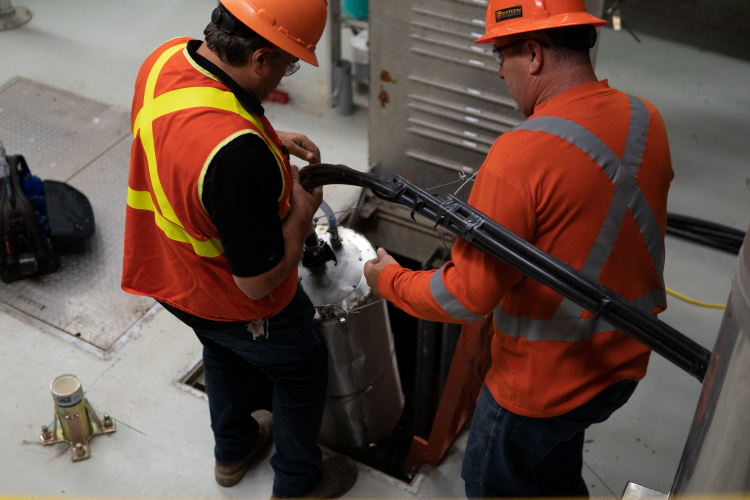 Lagoon process treatment plant in Saskatchewan discovers an effective and affordable way to reduce sludge along with some added benefits for its collection system.

Seeking solutions to effectively remove its lagoon sludge and reduce the associated costs, the City of Weyburn, Saskatchewan opted to implement a new automated bioaugmentation service technology from EnBiorganic Technologies on a performance trial basis. The EBS-Di technology was attractive to Weyburn due to its plug and play readiness, zero CAPEX for the City, and efficiency. In under 60 days, results were demonstrated in the de-sludging of the lagoons as well as elimination of odor. An additional benefit to the service was the removal of fats, oil, and grease within the City’s lift stations which had long been an issue. So impressed with the results in such a short period, Weyburn’s utility staff decided to enter an ongoing TAAS (Treatment as a Service) contract with Vital Utilities and EnBiorganic to continue the work begun in the performance trial.

Established in 1901, the city of Weyburn, Saskatchewan is home to a population of 10,000. Its utility delivers water, sewer, and wastewater treatment to a customer base of approximately 3,500. Weyburn treats its wastewater exclusively through a lagoon system that includes a 50-acre diversion lagoon and a 350-acre primary lagoon consisting of two anaerobic sludge cells and a series of nine holding or polishing cells. The wastewater is held for approximately one year in the polishing cells before the treated effluent is released to the Souris River.

The plant was originally constructed in the 1960s and expanded in 2011 with additional holding cells, enlarging its primary lagoon to the current area of 350 acres. The city’s public sewer collection system is comprised primarily of 6, 8, and 12-inch VCP and PVC mainlines with a single 24-inch diameter trunk line at the connection point of its six lift stations which feeds the treatment plant.

Over its years of service, the lagoons have experienced heavy sludge buildup and have never been completely dredged. Some cleaning was performed in 2006, but this only comprised of cleaning around the inlet pipes and pumping the existing sludge to the edges of the lagoon and into its corners, however nothing was removed.

The new sludge cells did receive a cleaning once after being put into service but nothing further in the way of sludge removal has been performed. The dredging of these cells was quite costly and Weyburn experienced issues being unable to dispose of what was dredged in the typical method as the material contained hydrocarbons and other contaminants that were at a level above acceptable limits for a standard landfill disposal.

In addition to sludge remediation and disposal, Weyburn also experienced a high degree of Fats, Oils, and Grease (FOG) buildup in its lift stations that required confined space entry by its operators. However, normal pressure washer spray techniques would not remove the buildup as the FOG was so heavy. Yet, regular cleaning was required to keep lift station pumps and floats in good working order. Odor at the primary lagoon could also be an issue from time to time. Although able to meet compliance permits, Weyburn had been remaining very close to allowable levels and wanted to stay ahead of potential issues.

The City of Weyburn Engineering Department was researching alternative solutions to costly mechanical dredging and came across EnBiorganic Technologies (EBT) website. Pleased to read of a local operating EBT licensee, the City reached out for further inquiries. LA Electrical Services operating as Vital Utilities, an EBT licensee recommended that Weyburn consider a trial performance of EBT’s EBS-Di autonomous bioaugmentation technology after learning of the City’s challenges and goals for its wastewater treatment. They felt strongly that this technology could help resolve Weyburn’s sludge issues, associated costs for dredging, disposal, and odour.

“It was a very attractive option to consider,” shares Renée Cugnet, Municipal Engineer for the City of Weyburn. “The solution is not mechanical and would not require a large CAPEX equipment purchase or project to add onto our treatment facility. Being non-pathogenic, and natural with no byproduct solution was also a key benefit.” Because Weyburn had the land space available for using facultative lagoons, constructing a mechanical treatment facility or process could not be justified or considered the best route.

See also  All About That Dace

The performance trial began in August 2021 and after an economic impact report and assessment, it was determined by EBT that two EBS-Di units would be utilized for the trial. One unit would be placed at Weyburn’s primary lift station #1 and the other at lift station number #3 in the western part of the city.

Weyburn received some benefiting results immediately after the units went online. Within a few weeks, its collection systems operators noticed that in the lift stations where the units were set up, FOG was falling or sliding off the sides of the walls and not sticking or clumping to the pumps and floats as it always had. Because of this, the operators have not had to enter the lift station to manually clean it whereas previously they were required to perform this task every few weeks. Odours had disappeared in both stations as well.

Prior to the trial beginning, some of the lagoons had sludge piles that were above the waterline. Approximately a month into the trial, the levels noticeably decreased and piling was dissipating. It was also noticed that the consistency of it had changed and was appearing fluffy or suspended instead of a fixed solid mass as it had been.

Weyburn had tried other methods to deal with its sludge in the past that included the manual addition of powdered enzymes to the lift stations to help break down fog with the added benefit to help with sludge reduction. Natural grease reducing agents were also utilized primarily for breaking down of grease. “Everything seemed to do a little bit, but it just wasn’t really effective or continuous,” shares Kim Wilkes, utility manager for the city of Weyburn.

Continuous improvement in the collection system and sludge reduction was proof enough that this was a solution that Weyburn wanted to keep as part of their treatment process, so they entered a contractual service agreement with multiple extensions. The EBS-Di is provided on a TaaS Model, (Treatment as a Service) and did not require any CAPEX or additional OPEX for the city. All service and maintenance will be provided on contract with Vital Utilities with remote monitoring and control performed by EBT from its laboratory now that the performance trial is successfully completed.

Although the trial incorporated the deployment of two units, it was determined by EBT’s technical staff and Vital Utilities that a single unit at #3 lift station would be sufficient to achieve the desired results. Note: Historically EBT has found that units placed further out in the collection system are more effective and can also deliver added benefits to the overall health of the collection system.

“One of the more physical things or safety side, that I am excited about is not having to have our operators enter potentially hazardous or confined space in the wet wells to do the cleaning and maintenance of the FOG that had always built up there and of course the associated labor costs,” shares Cugnet, “but most exciting is not having to do mechanical dredging of the primary lagoon, along with dealing with the separated sludge which we have to store, transport, and safely dispose of, all of which is very costly and presents environmental and human risks.”

…most exciting is not having to do mechanical dredging of the primary lagoon, along with dealing with the separated sludge which we have to store, transport, and safely dispose of, all of which is very costly and presents environmental and human risks.

Taking the leap of faith and trying a disruptive bio augmentation technology has been a step in the right direction for this small community. “The experience has been positive all around, everyone was excellent to work with and dedicated to getting the system working and delivering the expected results,” says Wilkes. “The added benefits at the lift stations and other things that I’m sure will come to light the longer we have the unit in place are very exciting and we look forward to receiving many benefits from the technology long-term.”