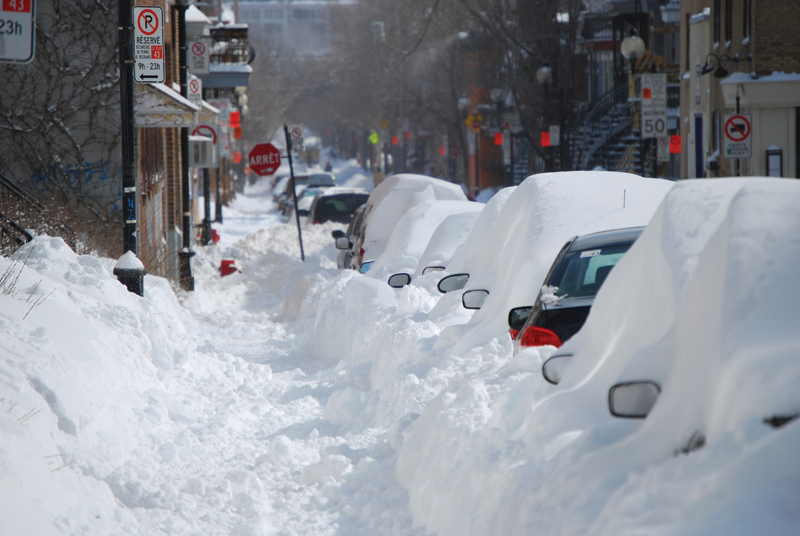 It is no surprise that snow is cumbersome for cities. It must be removed from streets and disposed of as swiftly as possible, creating an organizational headache and a monetary burden. For example, the City of Montreal spent $120 million to remove 13 million cubic metres of snow in 2006.

Generally speaking, snow in Canadian cities is collected and dumped in a snow disposal facility (SDF), where it is left to melt over the course of the year. But alternatives where snow is treated as an untapped commodity rather than as an expensive nuisance are slowly being suggested both in Canada and abroad.

Patrick Evans is an architect and professor of environmental design at the Université de Québec à Montréal, as well as the author of the children’s book Where the Snow Goes. He believes that the snow Montreal receives can be used either as a source of energy, or as a “visible, celebratory, urban event.”

Evans traces his interest in snow removal and its possible re-use back to his first winter in Montreal in the 1990s.

“I think it was the sheer unadulterated awe of witnessing the late night winter choreography of snow removal in Montreal’s narrow urban streets,” he wrote in an email. “Even then, I was immediately struck by the question: where does the snow go?”

His book details the magnitude of the snow removal operation in the city, describing how, at the time, 300,000 truckloads of snow were shipped to the city’s outskirts and deposited into SDFs over the course of a winter. Evans suggests that we take a more creative and useful approach to snow removal—an idea that has been gaining traction at different locations around the world.

In their study, Potential Utilization of City Owned Snow Disposal Facilities for Seasonal Cooling in Ottawa, Canada, Paul Cipcigan and Frederick Michel state that more than 100 seasonal storage systems exist in Japan and China, as well as a seasonal cooling project at the county hospital in Sundsvall, Sweden, part of Västernorrland County.

Prior to the year 2000, the 190,000 metre-squared hospital used a conventional cooling system to control the indoor climate and to ensure technical equipment didn’t overheat. However, a new cooling facility was eventually constructed at a nearby repository for snow cleared from area streets. Snow is stored in a seven-metre-deep bowl-shaped asphalt basin and is insulated with wood chips during the spring and summer to slow the melting process.

According to the Västernorrland County Council’s website, meltwater is “pumped through the heat exchanger where the water cools the technical equipment as well as the ventilation air, which passes through the hospital.” The water warms through this process and is used to melt more snow on its way back through the system.

Efforts have been made to incorporate similar technologies in Canada. Cipcigan and Michel’s paper describes both the technical principle behind seasonal ice and snow storage, as well as the massive energy potential of Ottawa’s Conroy SDF.

“The principle behind the seasonal storage of ice/snow technologies consists of utilizing the energy stored as latent heat in the phase change of water into ice during winter,” the paper reads. “The natural snow/ice collected during winter is then stored until summer when it is used as a sink for the heat removed during cooling of buildings or other industrial processes.

“The heat transfer is done through a heat exchanger and the cooling agent can be either re-circulated or discharged after use. The most common cooling agents used are water, ice/snow meltwater, and air, which are more environmentally friendly than the ones used by the conventional chiller systems.”

Cipcigan and Michel’s study, conducted in the winter of 2008/2009, investigates the amount of potential cold energy available from the Conroy SDF in Ottawa. “The cold energy,” the report reads, “is the amount of heat that can be consumed or dissipated during cooling.”

The report determined that in the winter of 2008/2009, the Conroy SDF held around 500,000 cubic metres of snow, from which an estimated 30,430 MWh was available. The study goes on to assume a 30-per-cent loss of snow before temperatures would necessitate cooling, based on the experience at the Sundsvall hospital. Even after the snow loss, the facility would possess an estimated 21,300 MWh of available energy.

The report also presented energy use data from a city-owned office building with 39,000 square metres of floor space, which was cooled during the warmer months by a pair of rooftop chillers. The average annual energy consumption of the two chillers from 2005 to 2009 was 512 MWh, costing $51,200 based on the cost of energy in 2009.

Comparing energy consumption figures at the office building and stored energy at the Conroy SDF, the report states that the volume of snow stored at the Conroy SDF “represents the equivalent cooling energy for over 40 buildings similar to the one analyzed, with a total floor space of approximately 1.6 million square metres and an estimated annual energy value of over $2 million.” The value was again based on energy prices in 2009.

“If all city SDFs were filled to capacity—approximately three million m3—the energy potential after a 30-per-cent per season loss allowance represents roughly 130,000 MWh of cooling energy, currently worth an estimated C$12.5 million annually,” the report continues.

Although the City of Ottawa, citing issues of cost and space for snow storage, decided not to pursue the exploitation of snow and ice for its cold energy potential, Cipcigan and Michel’s report, along with successful examples in Sweden and elsewhere, highlights the possibilities available to those cities lucky enough to exist in a northern climate.  WC