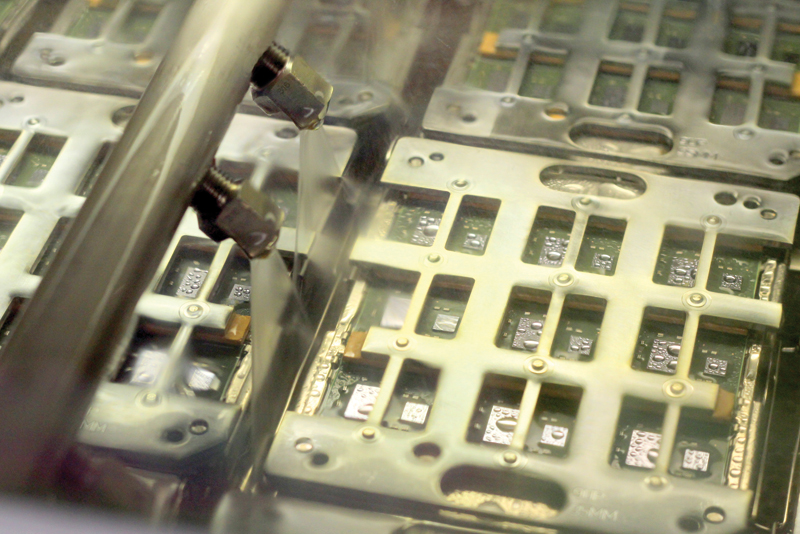 From pharmaceuticals to microchips, more than a dozen industries use ultra-pure water in their manufacturing processes. How do these industries deal with bacteria, particles, and organic and inorganic sources of contamination?

There are two grades of pharmaceuticals: USP Purified and USP WFI (water for injection). The Purified standard applies to topical and ingestible products, like creams and pills, while the WFI standard is applicable for medicines that are delivered to the body through injections, including intravenous, subcutaneous, intradermal, and intramuscular delivery.

Pharmaceutical companies go to great lengths to ensure the water they use meets strict standards. To attain ultra-pure water, this industry uses reverse osmosis (RO) as its primary treatment technology.

EDI is done by placing deionization (DI) resins inside electrodiaylsis membranes, explains Cartwright. “EDI utilizes a special combination of electrodialysis and deionization technologies to produce a system that is most commonly used to polish RO permeate up to 18 megohm resistance—the highest ionic purity commercially available.”

Cartwright says EDI is a good choice for an industry like pharmaceuticals that is extremely reluctant to use resins of any kind for fear of bacterial growth. Regardless of which method each pharmaceutical company uses, the critical goal is to ensure that bacteria and endotoxins are completely removed from any water used in their products.

USP Purified quality requirements have changed over time. “Over the last ten years, the level of solids allowed to remain in the ultra purified water used in this field has changed from 10 parts per million (ppm) to 1-3 ppm,” says Cartwright. “With the new USP quality requirements for ionic purity, many water supplies cannot meet these quality levels without running the permeate from one RO through another [double-pass RO]. Reverse osmosis [followed by] electrodeionization makes the ionic content much better than it has to be.”

As the water industry has developed technology that is able to produce water with fewer and fewer impurities left behind, industries like pharmaceuticals have kept pace and tightened their own standards and requirements for  water purity.

Ultra-pure water in IT
Water is considered an important resource in the computer industry, says Yves Veilleux, manager of energy and environmental programs at IBM Canada. Ionized water is used in the manufacturing process for both computer chips and their packaging materials. Computer chips are made out of silicone wafers that are cleaned and etched by chemicals and then flushed with ultra-pure water. Before water is used to flush a chip, it has to be purified to 20 parts per billion and 14 megohms at the point of distribution, according to Veilleux.

The water used in IBM’s manufacturing process is pre-treated with a combination of sand filters, cartridge filters, and carbon filters, then passes through ultraviolet (UV) disinfection units and is treated by three RO units, which treat 454 litres per minute. After RO is completed, the permeate passes through a UV water treatment system at 85 nanometers, and finishes by going through ionization units at 227 litres per minute.

To ensure that it has enough ultra-pure water at all times, IBM stores 378,541 litres on site. The water is maintained at 0.1 microns and is used in the manufacturing process at a constant temperature of 22.8 degrees Celsius and 482.6 kilopascals (kPa).

In and out
Manufacturing operations account for approximately 80 per cent of IBM’s total water usage. The other 20 per cent is attributed to the cooling towers, vapour blast, and basic facility usage, such as the toilets and cafeteria.

IBM takes the purity of the water going into its manufacturing process seriously, but the company is committed to maintaining the quality of the water exiting its facilities (see Table 1). The company has adopted a target for water conservation in manufacturing operations of two per cent cumulative annually, though it frequently exceeds these goals. Since 2005, the Bromont, Quebec site averages 3.8 per cent annual conservation. In 2010, it achieved 7.8 per cent conservation.

To this end, the water that is flushed from the manufacturing process is sent to an onsite waste treatment plant, before it is sent through the building for reuse, in the toilets and the cooling towers. “Under ISO 14001, water usage is a significant aspect for the Bromont site and we are constantly looking at ways to conserve water,” says Veilleux.

With purified water going through the manufacturing process and a commitment to water reuse, Veilleux says IBM looks for “potential new technology that could allow further reduction in water usage and recycling for our site effluent.”

IBM is partnering with Teledyne Dalsa and Sherbrooke University to develop an applied research centre facility located near the Bromont site. The centre will look for ways to reduce water usage in the manufacturing process for computer chips and their packaging. The Micro Innovation Collaborative Centre will explore technologies that will allow additional recycling and thus minimize the usage of water, says Veilleux. “Our participation in this project will enable us to propose changes in our existing technologies for water effluent treatment and recycling.”

Although the percentage of water used by each industry is different, the sentiment remains to the same: water conservation and technological advances are all key factors in moving manufacturing forward in a world with increasingly scarce resources.  WC

Laura Brooks is a freelance writer who has worked as a technical writer for the water industry.

The market for ultrapure water systems and consumables will exceed US $3.8 billion this year, the McIlvaine Company forecasts, thanks to growth in the semiconductor and power industries. The company’s report, Ultrapure Water: World Markets, released in August 2011, found that it will be a record year for the sales of new semiconductor equipment as well as the ultrapure water systems which accompany them. The $1.3 billion projected for the semiconductor segment includes cartridge and reverse osmosis filters, degasification, ion exchange systems, pumps, and other equipment. It also includes the piping and construction of the systems in the fabricated plants, as well as consumables, such as chemicals. Coal-fired power plants are the second biggest market this year, with gas turbines, nuclear power plants, and pharmaceuticals trailing in smaller segments.  WC

Look Before You Leak